Is there a rotational analog for Newton's laws of motion? [duplicate]

In context of rotational dynamics my textbooks interminably states that there always exists a rotational analog for every linear variable and they are related to one another through similar equation. (And for the fact I know about most of these analogs and the related equations)

Though till now I haven't yet seen/learnt of rotational analog of Newton's Laws of Motion. So

This kind of conceptualization may be useful at some level, but it is not accurate. You learn about kinematics and dynamics in 1D, and it is natural to want about the real 3D picture of those things. I was never comfortable with the statement of analogue between translational and rotational motion. The underlying assumption is that these two are separate mechanics working independently of each other. Just as the analogue between circuit (voltage, current) and dynamics (force, velocity) implies that similar behavior exists between these two systems.

But in real life (in three dimensions) the story is rather more convoluted.

Above $p$ is momentum and $L$ angular momentum, and $a$ acceleration $\alpha$ rotational acceleration, $F$ is force and $\tau$ is torque.

Equation (1) is Newton's second law, and (2) is the Euler equations of rotational motion. Point C is the center of mass, and each vector quantity is indicated with bold symbols, and their components resolved into x,y and z directions.

Note that the two sets of equations are de-coupled (independent of each other), but this only happens at the center of mass. The general equations as seen in this post are far more complex to write down in component form, so you need to familiarize your self with vector calculus before going that way. So your teacher understandably at this point reverts to the equivalency simplification.

On your last point, rigid body mechanics cannot be generalized on non-rigid bodies, because the notion of angular velocity doesn't exist. Look at Jupiter, which is spinning, but each part is spinning at a different rate. The dynamics exist, but the kinematics are all wrong. You can no longer calculate the velocity of a point, based on the rotation and the velocity of another point like you can do with rigid bodies.

The following are the most common rotational analogues of linear motion terms:

All differential formulae still apply such as $\frac {dx}{dt}=v$ and $\frac {d\theta}{dt}=\omega$. A particularly important relation is $\tau=I\alpha.$ You can substitute all the equation of motion with their rotational counterparts and get perfectly valid formulae. For example $v=u+at$ becomes $\omega_f=\omega_i+\alpha t$. Non-rigid body dynamics can also be generalized using these terms although that becomes quite complicated.

Yes, your statements are correct. They always hold just like in linear motion. However, you must be careful with the frame of reference. Any rotational frame of reference is non-inertial and hence these will not apply in that case. 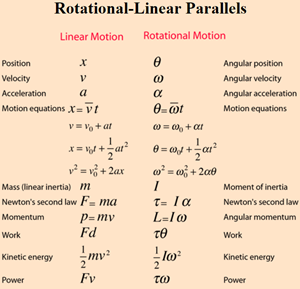 The existing laws of motion are sufficient.

One way to conceptualize that is that implicit in the laws of motion is that any vector (position vector, velocity vector, acceleration vector) can be composed and decomposed as vectors in Euclidean space.

Specific example:
Take the case of circular motion. Uniform circular motion can be decomposed in two components, each a harmonic oscillation and for each 1-dimensional motion component the laws of motion apply.

Other than that:
the analogy between expressions for linear motion and rotational motion goes only so far. There are overviews that present a side-by-side view of 10 or so expression. I expect that for subsequent expressions the analogy will not hold up.

The expresssions for angular dynamics can all be derived from the laws of motion. For example, in the Principia the very first theorem that Newton states (Book I, proposition I) is a derivation of Keplers law of areas generalized for any centripetal force.

This generalized law of areas is also known as conservation of angular momentum.

Not the answer you're looking for? Browse other questions tagged newtonian-mechanics forces rotational-dynamics torque or ask your own question.

4
Is there a rotational equivalent to newtons laws?
16
Derivation of Newton-Euler equations
8
Can torque relations actually be *derived* from Newton's Laws, or is it something extra?
4
Deriving torque equation from Newton's 2nd Law
3
Force and Torque

0
Coordinate System vs. Angular Properties vs. Centroid
2
Solving for motion of rotating rod using only Newton's laws?
8
Can torque relations actually be *derived* from Newton's Laws, or is it something extra?
2
Rigid body dynamics derivation from Newton's laws for higher dimensions
1
Are Newton's first and third laws contradictory?