Which of the following phenomena are responsible for rainbows?

Which of the following phenomena of light are responsible for the formation of a rainbow?

The word "total" makes the difference. Depending on the angle of incidence the reflection is either total or partial.

Total internal reflection, in physics, complete reflection of a ray of light within a medium such as water or glass from the surrounding surfaces back into the medium. The phenomenon occurs if the angle of incidence is greater than a certain limiting angle, called the critical angle.
[...]
At all angles less than the critical angle, both refraction and reflection occur in varying proportions.

Applying this to the rainbow:

According to Wikipedia - Rainbow - Mathematical derivation the angle of incidence inside the rain drop ($\beta$ in the image below) is $\beta_\text{max}\approx 40.2°$. 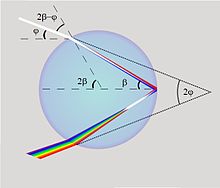 According to Wikipedia - Total internal reflection the critical angle for light from water to air is $\theta_c=49°$.

So you have $\beta_\text{max} < \theta_c$, and therefore you have partial reflection. This makes 3) the correct answer.

The answer is 3), although the question misses the actual cause of rainbows.

The surface normal of a spherical raindrop contains a radius of the sphere. The path that this light takes inside the drop forms an isosceles triangle with the radii at either end of the path. This means that the angle of incidence at the back of the drop is also B, which is less than the critical angle. Total Internal Reflection is impossible.

So what causes a rainbow? The ray deflects through the angle A-B when entering the drop, 180°-2B when it reflects internally off of the back, and another A-B when it exits. The total deflection is 180°+2A-4B, so it makes an angle D=4B-2A with the original ray.

This isn't an energy-conservation paradox, since the band of angles over which it is infinitely bright, is infinitesimally small. What it does mean, is that red light reflects at all angles from 0° to about 42°, and is much brighter at 42°. Dispersion means that the maximum is at a different angle for violet light, about 40°. These bright bands become the rainbow bands, and the sky inside the rainbow is a little brighter than outside.

Not the answer you're looking for? Browse other questions tagged homework-and-exercises visible-light reflection refraction dispersion or ask your own question.

2
Difference between primary and secondary rainbow

1
Refraction, reflection, and what is total reflection?
0
Colors in the secondary rainbow reverse of that in the primary rainbow
12
Why do some materials reflect (metals) and other materials reflect and refract (glass) from the quantum perspective?
0
Refraction and Internal Reflection
2
Total Internal Reflection of light
1
Formation of a rainbow
6
Is there refraction upon frustrated total internal reflection?
0
Doubt in a figure which explains rainbow formation
2
Difference between primary and secondary rainbow