Difference between primary and secondary rainbow

The short answer is, of course, that the reflections are not total internal reflections, just normal reflections at an interface. Such reflections have huge losses, and that explains why successive orders are harder to spot, as neils' answer points out.

But let me try to explain why total internal reflection isn't involved. Here's how I understand it: We see a rainbow because (when there are a large number of water droplets in the air), certain '"parts" of the sky are sending us more "red" light, and certain parts more "violet" and so on. Of course, what I mean by this is that the amount of colour in a small unit solid angle is more in that region as opposed to the rest of the sky, and if it is sufficiently strong for our eyes to sense it, it can be "seen" as a band of that colour.

Now why would that be the case? The answer is pretty amazing: it turns out that when parallel rays of light hit a (spherical) drop, some incident rays don't deviate very far from each other, and end up bunching together. This depends on the angle that they strike the back of the drop with (known as the angle of minimum deviation -- something that might be familiar to people who have done simple experiments with prisms). Here's an example: 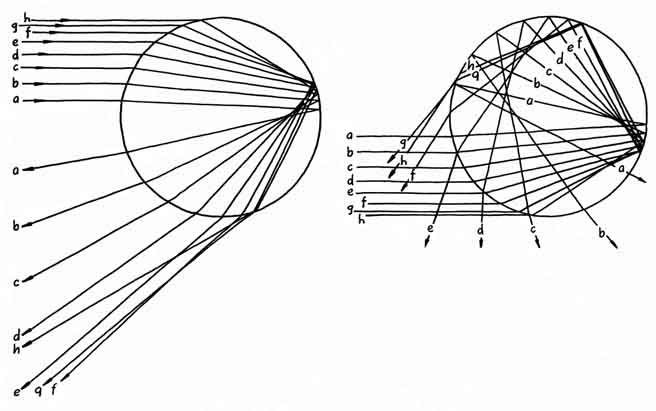 As you can see, the rays $e$, $f$, and $g$ in the first order rainbow (on the left) and $f$, $g$, and $h$ in the second order rainbow (on the right) pass through the drop and leave very close to each other, while the others get deviated by large angles. This 'minimum deviation' is found to depend rather heavily on the refractive index $\mu$ and the order of the rainbow $K$, and so different colours exit the drop at ever-so-slightly different angles, with each colour tightly bunched together about some angle. A series of simple but painful calculations lets us see that the angle of incidence of the rays that lead to this angle of minimum deviation is given by 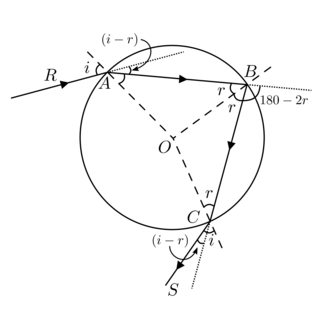 Now you can calculate what the angle would be at the point of reflection (at the water-air interface), which you should be able to see from the above diagram should be $r$. It's trivial to calculate $r$ given $i$ and $\mu$ and show that it is less than the critical angle required for TIL ($\approx 48.75^\circ$), and so the ray can't undergo total internal reflection!

Most of the light reflecting off the back surface of the drop does get refracted out, but a tiny amount in each of the drops gets reflected, and a smaller amount than that gets reflected at the angle of minimum deviation and all the little drops emitting light at that angle add up to let your eye see (say) the colour red at that angle. The rays of light that reach you from the second order go through this process once more, and much less of them reach you: Frankly, it's pretty amazing that any of it can be seen!

During each refraction and reflection inside the water droplet, some light is inevitably lost because 1) the reflections are not total but partial, and 2) the geometries are imperfect (the water droplet is not necessarily a perfect sphere, etc.). I'll call that loss a "yield loss" for each process.

Furthermore, note that for a chained series of processes, the cumulative yield of the overall process is the product of all the individual yields. This means that the more process steps there are, the lower the cumulative yield will be. This necessarily makes the secondary rainbow dimmer than the primary.

Not the answer you're looking for? Browse other questions tagged visible-light everyday-life geometric-optics atmospheric-science sun or ask your own question.

3
Double rainbows
0
Which of the following phenomena are responsible for rainbows?
1
Dispersion in Rainbows

0
Colors in the secondary rainbow reverse of that in the primary rainbow
5
Shape of the rainbow
3
Why is there no dark band below a rainbow?
2
Calculating the rainbow angle
5
What causes these rainbow effects using a polarizing filter on an airplane?
1
How do holographic mirrors work?
0
Doubt in a figure which explains rainbow formation
0
Which of the following phenomena are responsible for rainbows?