Entering a black hole, does the incident angle matter at all?

Inside the black hole (as you enter the EH), all objects (massive or massless) must move towards the singularity. The singularity becomes a moment in future.

Inside the EH, if no other force acts on the objects, as per GR they should be in free fall.

Now if they are in free fall, they must follow geodesics.

I have not found any visual description of any objects entering the EH, and their trajectory afterwards, except this one:

View of the sky from inside a black hole

Spatial dimensions inside the event horizon

Trajectory of safe descent into a black hole

And this one with the map:

Now this is where it needs clarification, what will be the trajectory of an object (massive or massless) moving towards the singularity, does it have to follow the shortest path (geodesic)? 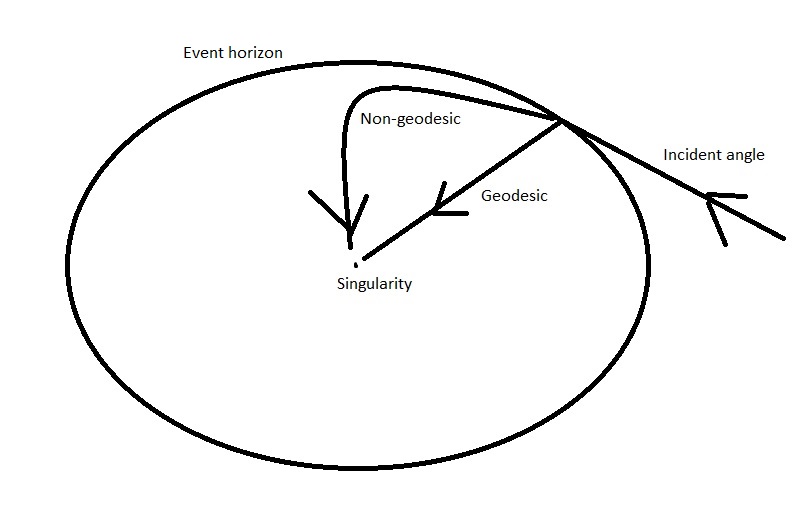 So basically when an object enters the EH it could either follow the geodesic path or the non-geodesic path.

There are two cases:

Your picture is wrong, there is no abrupt change in the angle. A particle approaching the black hole with an angle will have a trajectory like this (the simulation was done in Kerr Schild coordinates, but it looks the same in Raindrop and Droste coordinates): 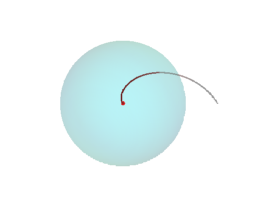 r can only decrease, but that does not mean that the motion has to be purely radial. Angular momentum is conserved.

which way will the object (massive or massless) follow entering the EH?

A really good question. Intuition may be misleading here.

Any object is crossing the event horizon on an almost radial path.

Imagine you are sitting in a rocket and feel very high acceleration. If you throw something horizontally, the thing will fall down and hit the floor almost vertically.

For the same reason, an observer very close to the horizon (who needs tremendous rocket thrust to keep a stationary position) will see an infalling object crossing the horizon almost vertically (i.e. almost radially). So the pictures aren't correct.

Setting $r$=$R_S$ yields $\cos\psi=1$. However, this can't be understood as a prediction of the above formula because of the coordinate singularity at the horizon. So the trajectory at the horizon is almost, but not exactly, radial.

The Schwarzschild metric isn't applicable regarding motion inside the horizon. Here one can use the Rain Frame metric without infinities at $r = R_S$, which is given by

Infalling light-like geodesics will also be bent towards radial but presumably to a lesser extent.

what will be the trajectory of an object (massive or massless) moving towards the singularity, does it have to follow the shortest path (geodesic)?

Seems there is confusion about what "geodesic" means. In general, a geodesic is a path that minimizes or maximizes a specific quantity$^1$. For example, Fermat's principle states that light moves from one point to another in such a way that the needed time is minimal.

Similarly, General Relativity can be expressed in terms of geodesics, but you have to be careful what geodesics to use!

Take for example a point $A$ on the surface of earth and a point $B$ one meter beneath it. Then the shortest path connecting them is a straight line, i.e. a line in Euclidean$^2$ space.

Now consider a free-falling body that starts at $t=0$ at $A$ and ends up 1 second later at $B$, i.e. we search for a path that connects $(A,t=0)$ with $(B,t=1)$ which is the trajectory taken by the free-falling object. This path is no more in familiar 3-space, it is in some mathematical space, spacetime for short, and it's characterized by proper time along the path being maximized: For all observers moving from $(A,0)$ to $(B,1)$, the observer that ends up with the maximal clock reading on his clock is the one that is free-falling. And this motion is not along a straight line in 3-space: Time passes slower due to gravity (closer to earth in this case), hence the object can speed up its clock by moving up. However, when moving (up) time dilation also plays a role, and the best compromise to maximize proper time is the known parabola of free fall from classical mechanics.

$^1$ The mathematical definition is more sophisticated.

$^2$ In General Relativity, 3-space is no more Euclidean in general, but for all practical purposes space can be considered to be Euclidean (flat) around the earth or inside of earth.

7
Why do you fall towards the center of a black hole?
3
Free falling into the Schwarzschild black hole: two times doubt
19
Intuitively, why do attempts to delay hitting a black hole singularity cause you to reach it faster?
1
Mass distribution inside inner horizon of a charged black hole
0
To a distant observer, is the trajectory of an object falling toward a black hole always reversible?
1
Can a straight rod exist next to or inside a black hole?
2
Particle falling into a Kerr black hole
7
Slingshot around a black hole, dipping into event horizon