Explanation of Width of Slit Being Proportional to Light Intensity

In this question Immortal Player states that:

The intensity of light due to a slit (source of light) is directly proportional to width of the slit.

The second answer posted by R C Mishra states that:

The amplitude should be proportional to the width.

Could someone please explain to me what is wrong with my intuition, and why the width of the slit is actually proportional to the intensity of the light.

I'm getting conflicting answers from various sources on the internet, and stackexchange isn't helping. Unfortunately, I'm thinking R C Mishra is right and the accepted answer there is wrong (as of when this is posted). If I'm wrong, I'd like someone to point out why.

My naive approach is to think in terms of conservation of energy. When you halve the slit, only half the energy gets through, so the intensity is halved. Amplitude, on the other hand, does not obey any conservation law.

Emphasis on naive here. Most of what I said was true, but the conclusion about intensity is false. My comment was incomplete because it left out the effects of single-slit diffraction.

Amplitude is additive, so doubling the slit width doubles the amplitude at the middle of the projected pattern.

Intensity does not follow any straightforward additivity law! Instead, you need to use conservation of energy (which is not the same thing). In the case of a single-slit, you have one factor of 2x because the slit is twice as wide, and in addition there is another 2x factor because the diffraction pattern is twice as narrow. Therefore, conservation of energy + diffraction considerations tell you there is 4x more intensity at the middle of the pattern.

I find it really interesting how both reasonings, despite being so distinct, end up giving you the exact same conclusion.

Since the light from the single-slit is projected to a wall that is very far away from the slits, we may assume all distances from each point at the slit to the middle point of the pattern are approximately the same. As a result, if a planewave is sent through the slit, all points contribute the same amplitude. Since doubling the slit width means you're doubling the number of points at the slit, additivity of amplitude means you will double the amplitude at the middle point of the pattern.

For intensity, we think in terms of conservation of energy (as I mentioned in my original comment), but also remember to factor in diffraction and interference.

When planar light passes through a slit, it creates a single-slit pattern. 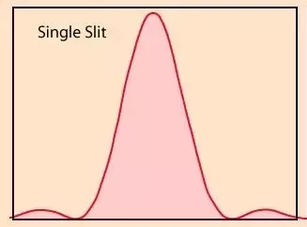 (For reference, the double-slit pattern occurs when two single-slit patterns interfere and create dark fringes within the middle spot, as you can see below.) 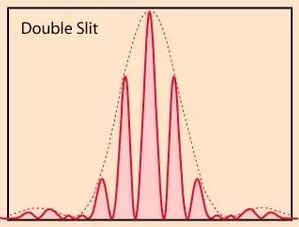 We'll only look at the single-slit scenario. The way to derive the single-slit pattern is to use the Fraunhofer diffraction equation (if you are interested, I can explain where this equation comes from). Based on the derivation here, the amplitude function for a single-slit of width $w$ is

I changed a few symbols from the wikipedia page. Here, $\theta$ is the angle from the slit to the point on the screen you are looking at, $A(\theta)$ is the amplitude function, $A_{0}$ is a constant, and $\lambda$ is the wavelength.

The intensity is the square of the amplitude, so we have

Not the answer you're looking for? Browse other questions tagged quantum-mechanics optics waves double-slit-experiment or ask your own question.

11
How is the width of a slit related to the intensity of light passing through it?

6
Why is the central maximum the brightest?
11
How is the width of a slit related to the intensity of light passing through it?
0
Single slit diffraction question
0
Difference in amplitude of field taken for single slit and double slit experiments
0
What does the amplitude of a photon signify in the quantum mechanical model of the universe?
8
Why does fringe width in double slit experiment remain constant if slits get narrower?
0
What happens if I send light from two light sources through a single slit?
0
Intensity of EM waves
2
Why is contribution to intensity of light equal for both magnetic and electric field?