I am reading through Hartle's "Introduction to Einstein's General Relativity" and it discusses the Eotvos Experiment in Chapter 6. The free-body diagram (shown below) has me a little puzzled.

This experiment was designed to see if there's any difference in inertial mass mI (think Newton's 2nd law) and gravitational mass mG (think Newton's law of gravity). The setup is this: Imagine two masses of equal weight, connected by a rigid rod. This rod is then suspended by a fiber and hangs freely. At first, you would (incorrectly) think there are only two forces acting on the masses; the force of gravity mGg pulling down straight down to the floor, and tension T pointing straight up along the fiber.

BUT, we are on Earth, and Earth is rotating; thus, there is also centripetal force mIa acting the masses.

So in the free body diagram below, we have three forces acting on the rod/masses: tension, gravity, and centripetal force. 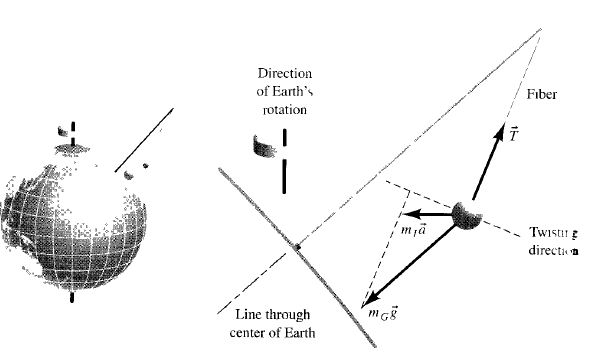 Their resulting net force has to equal that $ma$ line because the Earth is rotating.

Now that you see that, note that $T$, the hanging direction, isn’t aligned to $mg$. That (small) difference is what’s being discussed.

Wanting the centripetal force to be "cancelled" is a common mistake among new students of physics, because too many early examples and problems in textbooks involve zero-acceleration systems.

If an object is moving in a circle (as you are, fellow earthling, unless you are a polar explorer), then its velocity is not constant: circular motion requires the direction of the velocity vector to change. The only way to have a changing velocity is to have a nonzero net force. That's Newton's second law.

Remember that "centripetal" is a direction, not an interaction. The leftover force that keeps Eotvos's dangling plumb bob from flying off into space arises because the gravitational attraction towards Earth's center and the tension from the plumb line are not quite antiparallel. That's the point of the figure.

Not the answer you're looking for? Browse other questions tagged classical-mechanics free-body-diagram centripetal-force equivalence-principle or ask your own question.

0
Calculating Net Force with Free Body Diagram
2
What force acts on a small piece of a free, spinning ring?
3
Understanding a rotational system with centripetal snap, angular jerk, and a third-dimensional tension vector
2
What is the modulus of Tension Force in the simple pendulum experiment?
0
Centripetal force pendulum
0
Finding the free body force diagram of this diagram
12
When a ball on a rope swings in a circle, is there both centripetal force and tension force?
0
Banked Corners and Centripetal Forces Question
2
For a simple pendulum, why is the centripetal acceleration zero at the apex
0
Understanding the internal forces in rigid body motion