Can a submerged object in a free falling fluid sink faster than falling?

I've been wondering about how sunken objects would behave if you could instantaneously flip their container with water. Like if you had a bucket filled with normal tap water and you dropped a ball in it. Then SOMEHOW you instantly flip the bucket over such that for just a moment, the water is suspended in midair and the ball is still touching the base of the bucket.

What I want to know is, first of all what would happen? I know that if you drop a bowling ball and a bouncy ball from the same height they'd just about reach the ground at the same time, but what about this scenario? If you "drop" water and an object inside the water at the same height, do they reach the ground simultaneously? Or does the object "float" down the falling water?

Second of all, under what conditions could the object fall first? That's what I'm looking for- what kind of object could fall out of the water and reach the ground before the water does? What difference would there be between the object being a sunken wooden ship and a rock?

Third of all, say we take this experiment to the ocean, where the water pressure gets higher as you go down. If there's an object at the bottom of the ocean and we flip the ocean, how does the pressure affect things?

I want to supplement Emilio's intuitive answer discussing what would happen with some thoughts as to why what you propose in your second part cannot happen.

What kind of object could fall out of the water and reach the ground before the water does?

Let's assume the water is a single entity. In order for the object to accelerate faster than the water, the object needs to have a larger downward acceleration than the water does. This would need to come from a downward net force that is larger than the weight of the object, as in free fall both objects will have the same downward acceleration. Where would this force come from? There is no buoyant force in a free-falling fluid, but even if there were the buoyant force would act upwards on the object, not downwards. Therefore, the best your could even hope for is that the object and the water move together, and this is indeed what happens.

Perhaps the confusion comes from why certain objects normally sink. They aren't pulled down by the water, they are pulled down by gravity. In your everyday scenarios it is just that the fluid impedes this "falling". You could even think of us as all sinking in the Earth's atmosphere. Therefore, in your scenario, it is not the case that because the object is in water suddenly means it wants to move down through the water. The water itself is not the mechanism for why objects sink.

The Equivalence Principle tells you that physics in free-fall is identical to physics in an inertial frame in the absence of gravity, in which case there is no buoyancy and any changes to the boundary of the liquid come from surface tension and related effects. The same is true for your falling mass of water.

The question is well answered by Aaron and Emilio. To make the effects interesting, let us visualise the scenario for a particular case - when the object is hydrophilic (water attracting) and air resistance is negligible, in a qualitative manner.

The following image shows the system at different times: 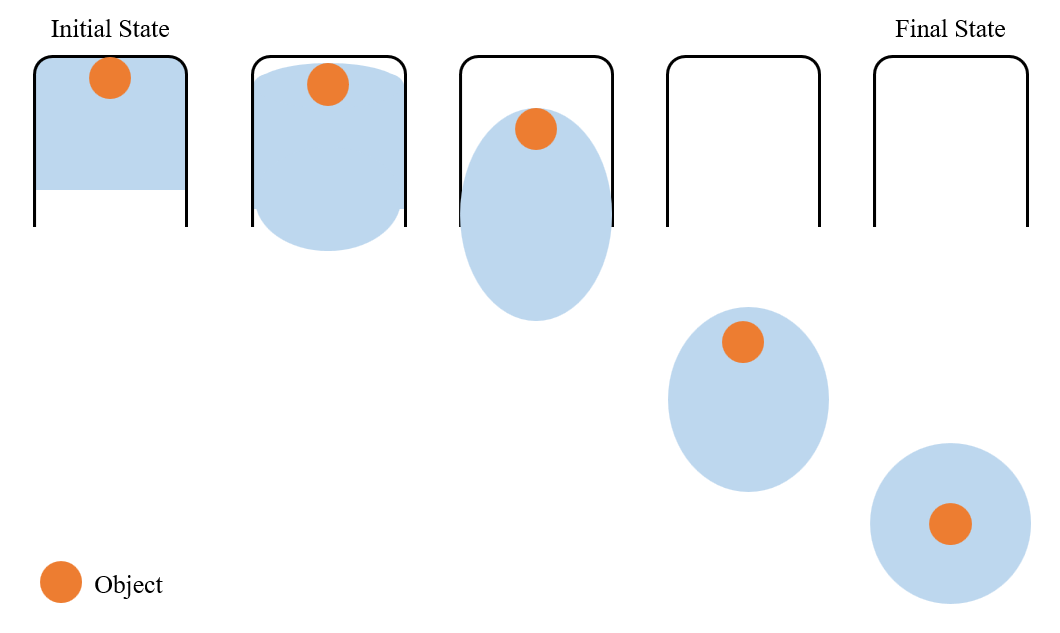 The "Initial State" as the name suggests is how the system looks immediately after flipping. The second diagram (from left to right) shows the system after some time. You could see, near the bottom, the liquid near the beaker's inner surface has moved lesser distance compared to the liquid near the axis of the beaker. This can be attributed to the viscous forces of water which acts in between different layers. Think it of as a frictional force between different layer of the fluid. At this time, near the top, a somewhat "nothing" vacuum gets created much like when "mercury barometers" are tilted. Let us assume that this suction force due to the vacuum (more precisely the atmospheric pressure at the bottom pushing the liquid upwards into the beaker) is not enough to hold the liquid inside the beaker itself.

The third image shows the situation at a later time. Till now both the object and the centre of mass of the fluid has fallen down at the same rate. The object could have moved downward slightly more than the liquid due to attraction forces provided by the molecules of the liquid. This is best observed in the fourth image. By this time, the entire both water and object have come out of the beaker.

Now, the situation will be similar to having no gravity. As we've neglected air resistance, water takes nearly a spherical shape. Further, as the object is hydrophilic, attraction forces balance out only near the centre of the water sphere and so, the system will look like the last image denoted by "Final State".

In reality, if we include air resistance, we may have to account for the distortions in the spherical shape of the liquid. Also this might alter the position of the object inside the liquid.

It seems some do not understand why the object moves towards the centre of the liquid sphere. To eliminate this confusion, let us consider the following diagram, which shows the adhesive interactions between molecules of water and the object in red coloured arrows: 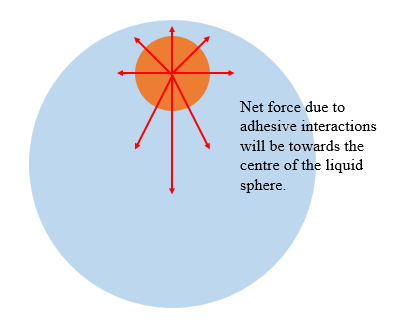 The object placed off centred, has a non uniform distribution of water molecules around it. So, the distribution of forces is also not uniform and hence net force is towards the centre. You can imagine this like different people pulling the object using a rope with equal forces but the number of people on different directions is different and hence causing a difference to the state of rest of the object.

It was asked in the comments how can something not in contact with the ball exert force? How can the force be unbalanced?
The reason is adhesive interactions are electrostatic forces. These reduce with increase in the separation between the interacting objects. Further, these forces can act even if there is no physical contact between them.

I'm not saying the object at an off-centred position goes towards the centre of the water sphere due to "hydrophilic" interactions. It's because of the "adhesive forces" which act between the molecules of water and the object. Adhesive forces can act even if there is no physical contact as they are electrostatic in nature as described previously.

The main source of confusion in the comments below was misunderstanding of adhesive forces as hydrophilic interactions. The main reason why I considered hydrophilic objects over hydrophobic is: in the case of hydrophobic objects due to the initial state of the system, the object would remain out of the liquid and the liquid would not swallow the object due to adhesive interactions as repulsive forces are stronger than attractive forces.

If the hydrophobic object were swallowed the energy of the system increases or in other words it'll be less stable and so the object and the liquid fall down as separate entities.

under what conditions could the object fall first?

If there is enough air resistance to slow down the water, then the denser than water object will fall faster than the water.

flip the ocean, how does the pressure affect things

This is quite different.

For one thing, it's not free-falling.

There would be more than a bit of bouncing and turbulence, but before too long, the original pressure distribution will be restored.

Meanwhile, possibly after having initially been thrown upwards, the heavier than water object will again sink to the bottom. Depending on friction, the object might drag down some water with it, but most of the water at the top will stay more or less the top, and most of the water at the bottom will stay somewhere near the bottom - until temperature convection and other causes of turbulence come into play. But I think that's going beyond the scope of the original question.

once you tip the bucket over the water,ball system is in free-fall.

in free-fall gravitational forces have no effect on the arrangement (except for tidal effects which a very weak at this scale) so everything falls at the same speed. you have a blob of water with a ball near the top.

what could cause the ball to move faster.

Third of all, say we take this experiment to the ocean, [...] and we flip the ocean, how does the pressure affect things?

The pressure goes away as soon as you flip. pressurised things at the bottom of the ocean expand suddenly. otherwise same.

Not the answer you're looking for? Browse other questions tagged newtonian-gravity reference-frames water fluid-statics buoyancy or ask your own question.

2
Basic Concepts of Water Pressure for Plumbers
3
Free falling objects
8
Is it correct to say that falling object are standing still?
0
Do Opposing Equal Forces = No Force?
1
Does air resistance increase the speed of a falling object?
16
Why do we need to apply more force to push a submerged object deeper?
0
Is it easier to lift an object in air rather than in vacuum?
0
Problem Regarding Buoyancy
4
Will the box float?