When does a collision become classical?

I was thinking (after misinterpreting and answering another question) about collisions on the atomic scale. I know it's impossible to visualize, but I did. For example the collision between an electron and a heavy atom. There are infinite ways the electron bounces of, dependent on the energies of both and their relative momenta.

But then I thought: How many atoms (assuming they can form a whole), packed in space(time), are needed to bounce off another package of atoms, to make the collision classical?

To put it in other words: chances are no longer involved, so the collision becomes non-quantum mechanical, i.e. classical. Within the framework of non-relativistic QM.

I guess this is the same as asking when quantum mechanics becomes classical (it's a blurry line, I guess again, which divides the two). And maybe somehow this has to do with quantum decoherence (see the picture below), but I'm a bit lost here. So.. 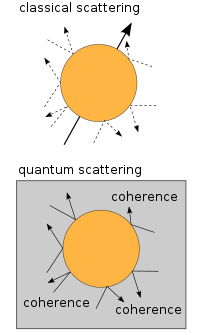 Browse other questions tagged quantum-mechanics classical-mechanics collision decoherence or ask your own question.

1
Testing my understanding of QM - The Double Slit Experiment without the slit
7
What does it mean (how is it visualized) for a particle to act as a wave?
1
Can an electron spontaneously be emitted/ejected from a hydrogen atom?
11
Why are electrons treated classically in cyclotron measurements?
1
Statistics of a classical single particle toy model
0
Understanding quantum fluctuations
0
Long lifetime pair creation in nonrelativistic $v\ll c$ regime?
0
Could quantum randomness be transformed into classical, macroscale randomness?
1
Why don't electrons “get lost”?
1
Smallest object at rest (in the lab frame) vs Avogadro's number?