How do astronomers identify different elements from the combined emission spectrum of multiple substances?

It is said that the spectral lines of a particular atom or molecule is unique and this could be used to identify the substance by comparing the spectrum with the existing library of spectra of different atoms, molecules and compounds. In other words, spectral lines are like the fingerprints which help to identify different substances. This is used by astronomers to identify the chemical composition of distant stars and planets.

Usually stars and planets have diverse composition i.e., have different atoms, molecules and compounds. So the spectrum observed from these sources must have spectral lines belonging to each and every substance superposed on one another. 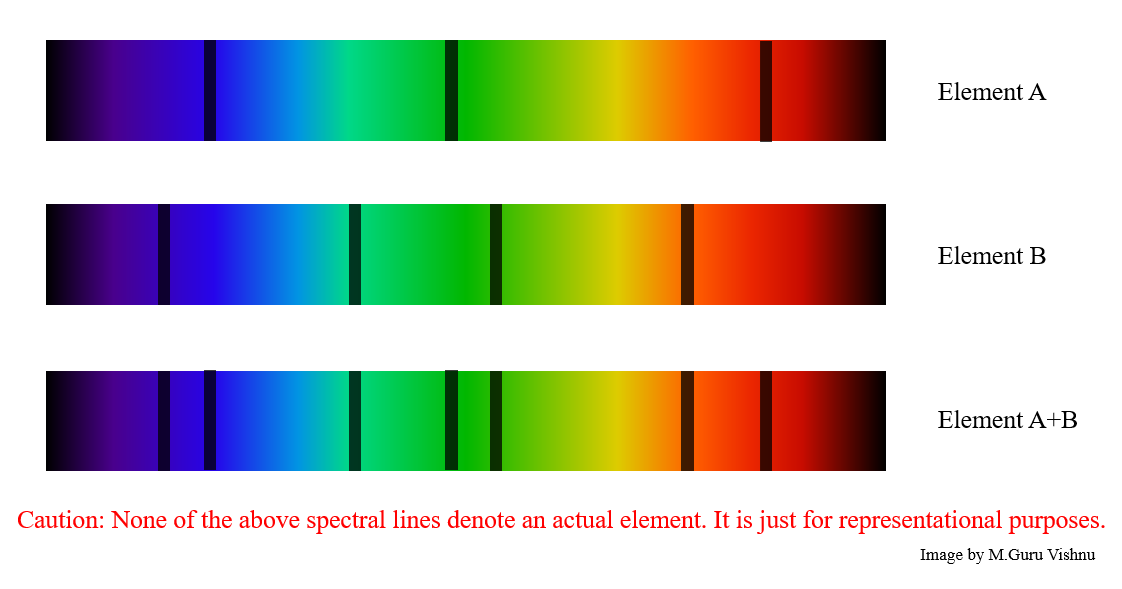 We've just considered two elements but in reality there will be even more. More the number of elements more populated will be the resulting spectrum. So, the process of finding the composition becomes even more complicated. We've seen how difficult it would be to identify the elements. But in addition to this, they find the relative composition of elements in distant stars and planets based on the spectral lines. How do they do this?

To put this question in some common terms - how do investigators identify different criminals when each and everyone places their fingerprint on the same location such that the patterns overlap? However, let's limit the answers explaining only the "optical fingerprints" of elements.

As you point out, this is a difficult task. Nonetheless, it can be done. Key to the process is having on hand the absorption line spectra (Fraunhofer lines) for as many of the (pure, unmixed) elements as possible in advance; this then lets the investigator determine if (in your example) the combined spectra for A+B is 1) actually another element C, or 2) just a mixture of A+B.

Also note that the spectrum for (for example) iron and other "heavy" elements is complex, with many lines at unique wavelengths. As such, the "fingerprint" for iron has many distinguishing features in it, all of which must be present to positively identify the presence of iron. So, one by one, the different elements in the spectrum can be picked out, and the process of looking for line matches between the "archived" reference standards and the actual spectrum proceeds until all the lines are accounted for.

Not the answer you're looking for? Browse other questions tagged optics astronomy spectroscopy or ask your own question.

0
Spectroscopy - Absorption lines
1
Can two spectral lines from different elements be equal?
2
Spectroscopy of Stars
2
Why are stellar absorption line spectra passed through a cold gas?
2
If two different mediums have the same refractive index do they refract light identically at all wavelengths, pressures, etc.?
34
Do rainbows show spectral lines from the sun?
40
Is our solar system really that odd?
2
How can spectroscopy be used to find the composition of exoplanet atmospheres?