Is there any intuitive explanation as to why is entropy is a state function?

Intuitively, you can think of the number of accessible energy states by particles in a system being influenced by the state of the system (e.g. temperature and pressure). Therefore $\Omega=\Omega(N,P,T,...)$ is a state function. Now, since $S=k_Bln\Omega$, entropy is also a state function.

EDIT: I've given some intuition behind the statistical mechanical definition of entropy being a state function, but what about the thermodynamic definition?

where $\delta Q_{rev}$ is a tiny increment of reversible heat flow in a reversible process (i.e., no entropy generation).

We have expected that this statement is true in general because it was shown to be true for simple cases like ideal gases. Why not assume it's true for all reversible cases?

Anyways, you can visualize this statement like this (probably in your textbook): 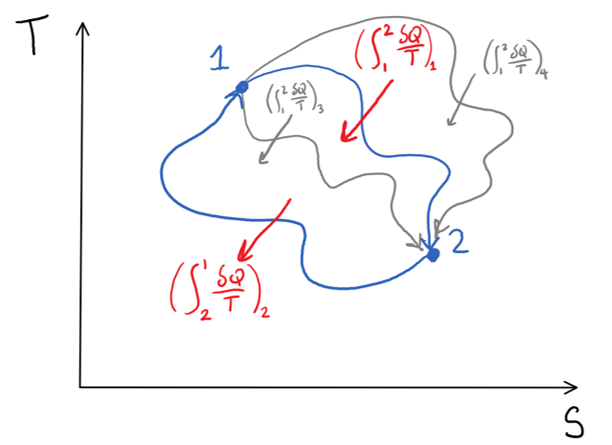 Consider only the blue paths for now, these represent any general process between states 1 and 2. At a given pressure, state 1 is defined by $(T_1, s_1)$. We reversibly transfer heat (entropy) to the system, and arrive at state 2 defined by $(T_2,s_2)$ along the blue path. The amount of entropy we transferred is $\left(\int_1^2\frac{\delta Q_{rev}}{T}\right)_{1}$, where the subscript $1$ declares that this is path Number 1. Now to get back to state 1, go along the blue path again. we must remove entropy from the system, an amount equal to $\left(\int_2^1\frac{\delta Q_{rev}}{T}\right)_2$, again the subscript says I'm calling this path Number 2. The Clausius statement says

Now consider the grey paths. By a similar argument, you can see that

This says that $\int_1^2\frac{\delta Q_{rev}}{T}$ is the same regardless of what path you state to get from 1 to 2. In other words, there are infinitely many ways to add heat (entropy) to your system, and arrive at state 2. This is why entropy is a state function - its value does not depend on the processes required to reach that value.

You can intuitively realize this by the following thought experiment: consider a crystal of atoms, which are vibrating at room temperature. Call this "state 1".

How can I increase the amount of messiness (disorder, entropy, etc.) in this system (i.e., bring it to state 2 on the $T-s$ diagram below)? Well, one way is to perform a process that adds heat (entropy) at constant pressure, to increase its temperature. So the atoms now look like this:

You can easily see that this system has higher entropy, it's more messy and disordered (vibrational entropy is a type of entropy).

I added heat at constant pressure, and the $T-s$ diagram for this process looks like the blue path here: 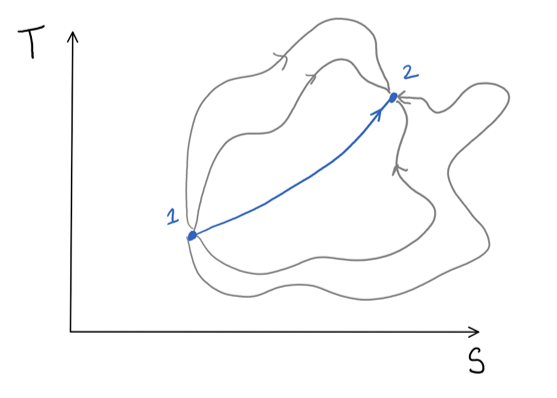 But you can see, according to our investigation of the Clausius theorem, that all the grey processes (they might not be constant pressure) would take us to the same high temperature state. In other words, there are infinitely many ways to go from a system with low entropy (less jiggling of atoms) to high entropy (more jiggling of atoms) and vice versa.

Note the connection to the statistical mechanical definition of entropy, $S=k_Bln\Omega$. A higher entropy system, obtained by somehow adding more entropy, is simply messier (e.g., those vibrating atoms), and has more microscopic configurations it can access. The number of possible microscopic configurations is of course determined by things like temperature/pressure, not how you reached that particular temperature/pressure.

That is why entropy is a state function - its a quantity that only depends on the state of a system, not how you got to that state.

If your textbook is trying to derive entropy by any sort of simple integral then it has only shown a proof of very limited applicability, for example to systems with a two-dimensional state space. There are subtleties here. Any "proof" which assumes that a reversible process without heat exchange moves the system along a region of reduced dimension in state space (i.e. does not access the whole state space) has in fact already assumed that entropy is a state function, so is not a derivation or a proof.

To prove that $dQ_{\rm rev}/T$ is a change in a function of state, one can use the argument behind Clausius' theorem. This involves taking a system around a general cycle, using a reversible heat engine to supply and extract whatever heat may be required. The proof is presented in the textbook by Adkins for example, and also in my own book. One can then give a name to this state function, and the agreed name is entropy.

A related approach is to prove from the Kelvin statement of the 2nd law that processes that are reversible and without exchange of heat cannot access the whole state space, but only a "surface" (i.e. region of dimension one less than the total) in state space.

If we closely follow this line of reasoning, we observe that it is Clausius theorem (Second law of thermodynamics) that guarantees that the integral in $(4)$ depends only on the final state $\text{A}$, and not on the reversible process connecting $\text{O}$ to $\text{A}$. That's what makes the integral a state function.

Why would we have suspected that entropy will be a state function in the first place?

To summarize, it is Clausius theorem (through statement $(2)$) that prompted us to identify the integral in $(4)$ as a state function, which was subsequently named "Entropy."

What I've shown you is nothing new for we have already identified a well-known state function in a similar manner. The First law of thermodynamics states $(5)$. $$\int_{\text{A | Process P}}^{\text{B}} (\delta Q - \delta W) \text{ is independent of the process $P$ connecting the states A and B.} \tag{5}$$ And this led us to define a state function called the "Internal Energy" in the following manner (again, taking a reference state $\text{O}$): $$U(A):=\int_{\text{O | any thermodynamic process connecting O to A}}^{\text{A}} (\delta Q - \delta W) \tag{6}$$ To hit the nail one last time, it is the First law of thermodynamics that guarantees that the integral in $(6)$ depends only on the state $A$, and not on the process connecting state $\text{O}$ to state $\text{P}$.

1 With the emphasis comes the caveat: It is not necessary for all the possible thermodynamic states of a given system to be connected to the reference state $\text{O}$ by a reversible process. This subtlety is discussed in a bit more detail in a footnote in Kerson Huang's book in page 16.

Entropy change is given by $\int{dq/T}$ only for a reversible path. It is easy to show that, for an ideal gas, all reversible paths between two end states lead to the exact same analytic expression for the integral. This led early researchers such as Clausius to realize that the concept could probably be extrapolated to all materials. History has shown that this was correct.

The most basic underlying idea is that heat flows from hotter to coolest bodies. The first approximation of entropy is:

where $q$ is the heat flow and $T_{av}$ is the average temperature between bodies.

The approximation improves if the process is composed by many steps, each one with a smaller temperature difference between bodies:

According to this definition, $\Delta S$ doesn't depends on the path, so it is a function of state.

3
Why is there an absolute entropy?
16
Intuitive understanding of the definition of entropy
1
Can you choose the variables of a state function?
14
How is entropy a state function?
0
If all microstates are equally probable, why does entropy tend to increase?
1
How can we show that Entropy is a State Function?
6
Entropy as a state function for irreversible paths