Why is the weak force the main limiting factor when it comes to the $p$-$p$ fusion chain, instead of the quantum tunnelling effect?

For the $p$-$p$ fusion reaction chain occurring in the sun, why is it that the main limiting factor placed on the time scale of the initial proton proton fusion into helium due to the fact it is a weak force interaction?

I would've thought it is because the thermal energy available in the core of the sun is much smaller than the Coulomb barrier felt by the protons. So the fact the protons need to QT to fuse is the reason the fusion occurs so slowly.

How slow are weak force interactions that they are the dominant reason here and why?

For the initial steps of nuclear fusion you need to get two protons together and then turn one into a neutron via the weak force interaction.

Both things are important to the overall rate. The weak flavour change of an up quark to a down quark in a proton is a hindrance to the process and means that you have to get a large population of unstable diprotons together in order to create a stable deuteron. i.e. Making the di-proton is easier than getting the di-proton to change into a bound deuteron, so in that sense the weak interaction controls the overall timescale at a given temperature.

Why is forming the deuteron a bottleneck? Well, it's a weak interaction responsible for changing a proton to a neutron, much weaker than the strong nuclear force responsible for allowing the two protons to get near each other in the first place.

It is the hindrance of the weak interaction step that requires the interior temperature of the Sun to be so high. If it were possible for two protons to fuse to a stable state, then much lower temperatures would be required. This is demonstrated by the order of magnitude lower temperatures at which deuterium or lithium fuse with protons, neither of which require any weak interactions but have the same or higher Coulomb barrier between the reactants.

It is an interesting hypothetical quation to ask what would happen if the weak interaction was much stronger, such that a deuteron was always formed when two protons were brought close together? In such a universe I think stars would have much lower internal temperatures, be larger for a given mass (since $T \propto M/R$ from the virial theorem) and much more luminous and short-lived.

I am copying from this link. 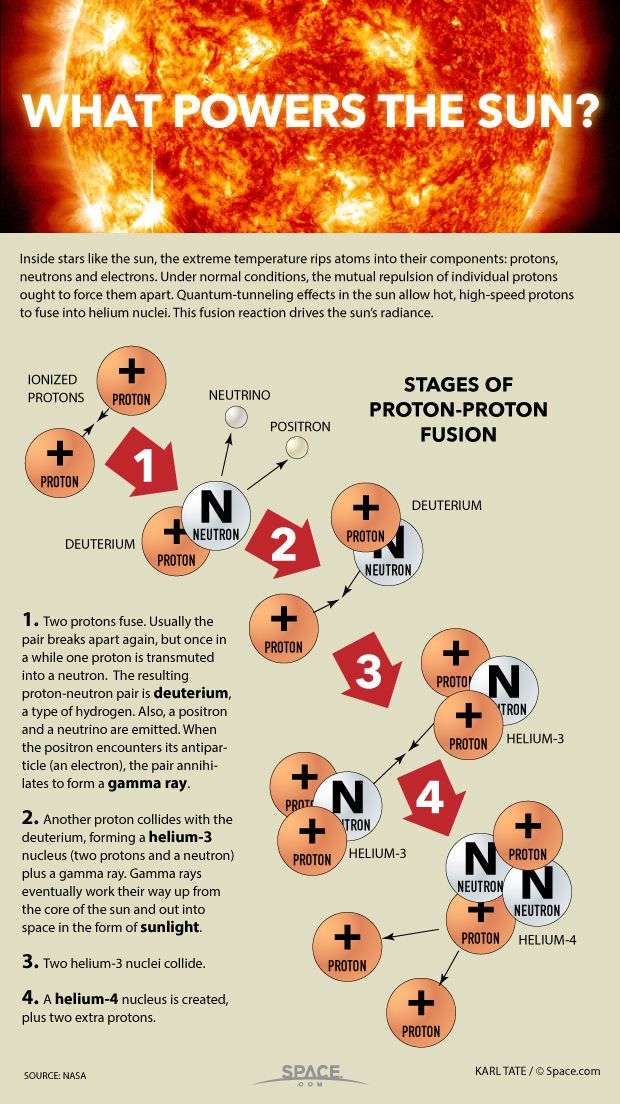 Note the "two protons fuse and usually fall apart" due to the electromagnetic repulsion. The only reason to fuse is the strong quantum mechanical force which gives the probability for the two protons to be close enough to call it fusion.

There is enough energy in the plasma though to bridge the energy difference between the proton mass and the neutron mass, so the proton can turn into a neutron through the weak interaction, for the tail of the proton kinetic energy distribution, but the creation of a neutron goes through the weak interaction. It is called weak because its coupling is $10^{-6}$ of the strong force. That is why the diprotons fuse and decay, being unstable. Once a neutron forms, there are deuterons, which then scattering with another proton form the tritium nuclei which eventually lead to helium.

It is not a simple reaction but a series.

The main control is the weak interaction of a proton turning into a neutron , because of the small probability due to the coupling constant.

Not the answer you're looking for? Browse other questions tagged nuclear-physics astrophysics fusion or ask your own question.

6
How much faster is the fusion we make on earth compared to the fusion that happens in the sun?

16
Where does the energy produced by fusion come from?
13
Why is Helium-3 better than Deuterium for fusion energy production?
12
With what probability does nuclear fusion occur at energies far below the Coulomb barrier?
6
How much faster is the fusion we make on earth compared to the fusion that happens in the sun?
1
Were the 1st generation stars low or high-mass stars?
0
Why don't we consider the Gamow factor when configuring the cyclotron?
0
How does the Sun provide enough energy to fuse protons?
1
In fusion inside stars (sun) or very hot gasses, how do the electrons get bound and what about tritons and $D$-$T$ vs $D$-$D$ fusion?
0
Nuclear reactions in stars: tunneling?
0
Why do helium fuse in the Sun?