Direction of Current, according to Lenz's law, from induced EMF 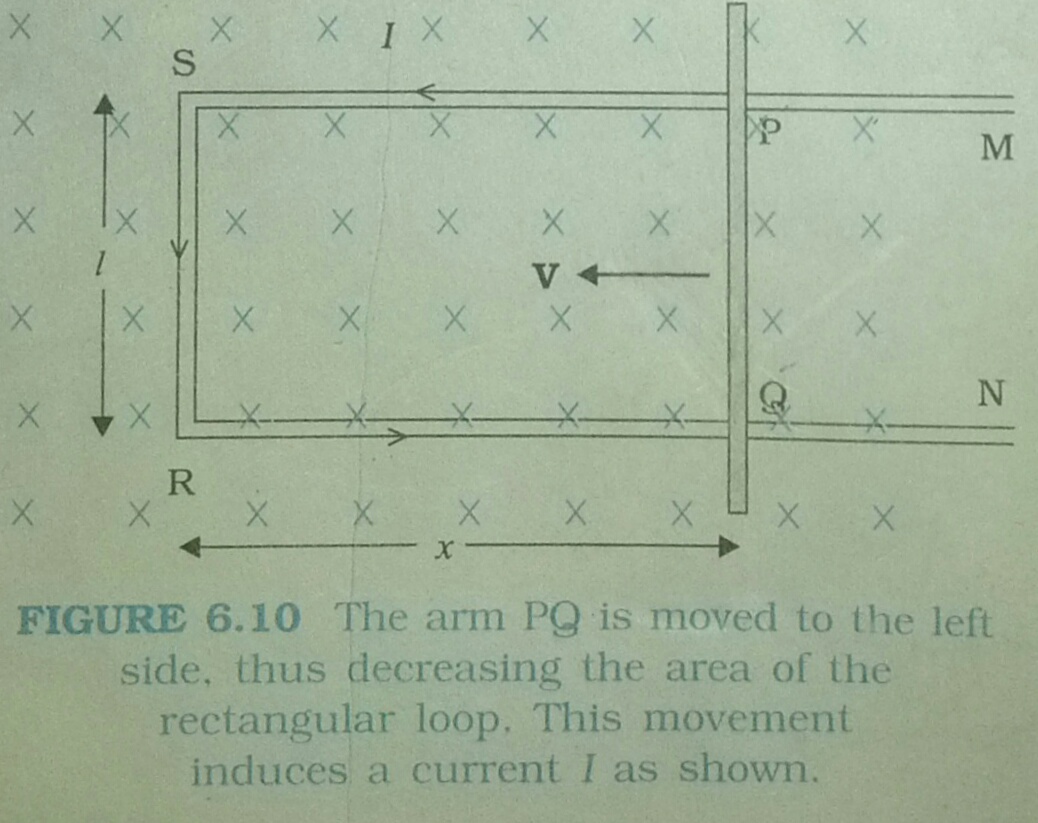 The Arm PQ is moved to the left side thus decreasing the area of the rectangular loop. This results in a decrease in magnetic flux in the Downward (inside the page) direction. Hence, according to lenz's law, the induced current should be in Clockwise direction but the book says the opposite.

Am I missing something? or is the book wrong?

The book is wrong. The flux through the loop into the page is decreasing as the wire slides to the left. A clockwise current is induced in the loop, increasing the strength of the magnetic field into the page, and thus offsetting the change in flux.

The general convention for magnetic field lines going into a plane/page is $\times\,\times\,\times$ (see for example Sears and Zemansky's University Physics with Modern Physics" 14th edition by Hugh D. Young and Roger A. Freedman (2015), or "University Physics" - Revised Edition, by Harris Benson (1996) orFundamentals of Physics" 6th edition by Halliday, Walker and Resnick (2001).)

Associated with the induced EMF ${\cal E}$ is an induced current $I_{\rm ind}$. The current $I_{\rm ind}$ is directed clockwise around the rectangle PQRS as you look at it, i.e. the induce current flows in the direction of P to Q and Q to R and R to S and S to Q, contrary to the suggestion in the diagram provided from the book that the OP references.

The magnetic field associated with this current is ${\bf B}_{\rm ind}$. It is directed into the page and this counteracts the decrease in magnetic flux caused by the rod moving to the left.

If the rod in the above figure moved to the right with velocity ${\bf v}$ the direction of current in the diagram above would be correct. This is confirmed by Figures 29.11, 29.12, and 29.13 (b) in Sears and Zemansky's ``University Physics with Modern Physics" 14th edition by Hugh D. Young and Roger A. Freedman (2015) which I have right in front of me. I would like to share the figures but I think this might infringe copyright rules. In any case I think if one does a bit of searching around the internet or checking out other physics textbooks one will find that what I have written above is correct.

Edit: I have decided to add Figure 29.11 from the text by Young and Freedman. 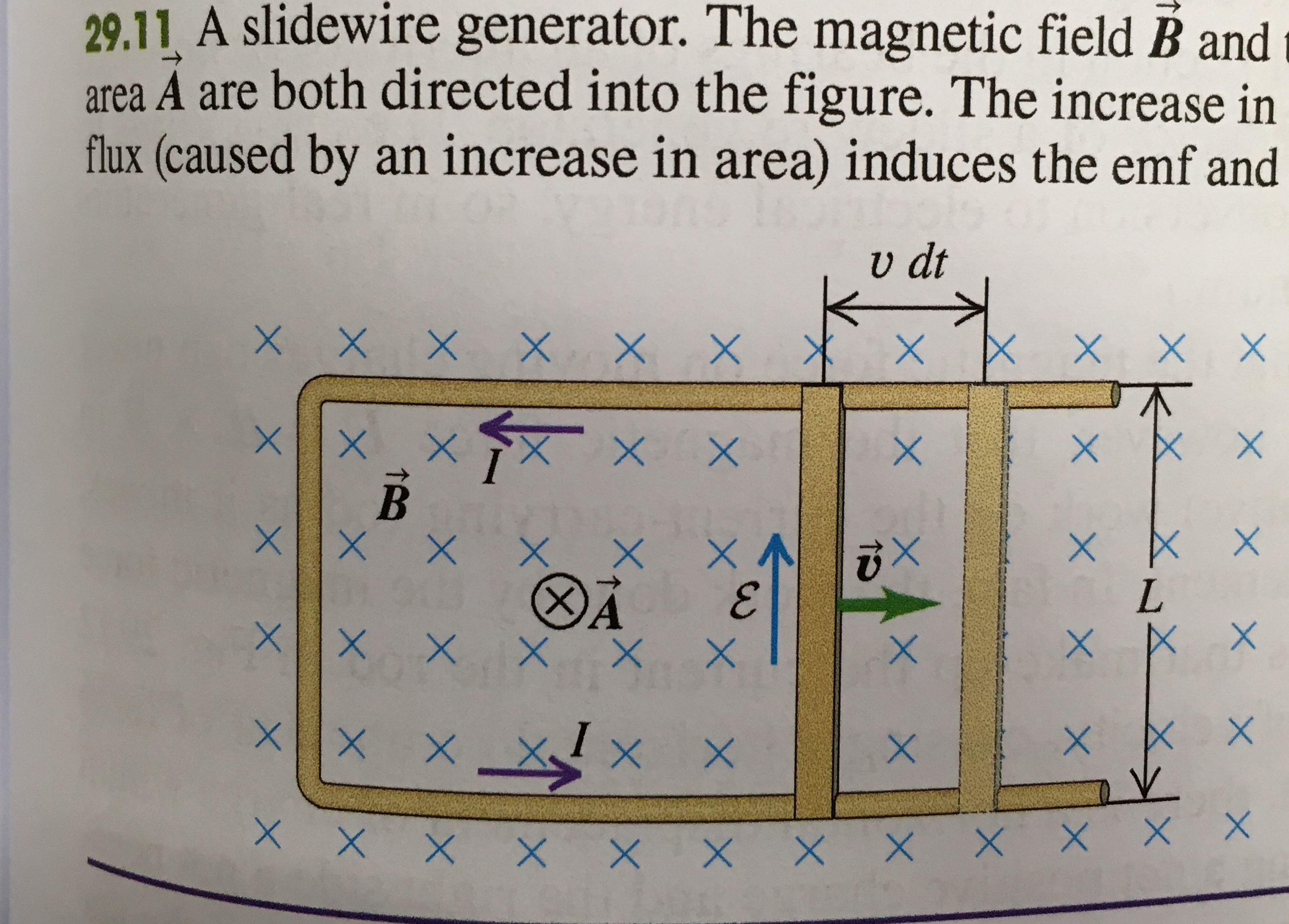 Edit 2: The Figure 29.11 shows for a bar moving to the right that the magnetic flux into the page increases. A counter-clockwise EMF ${\cal E}_{c-c}$ is needed to produce a counter-clockwise induced current which will produce an induced magnetic field that comes through the loop and out of the page and counter acts the increase in magnetic flux into the page caused by the bar moving to the right.

No the textbook is correct. Are you using Flemming's right hand rule?

Because according to the right hand rule if B (the magnetic field) is into the page and the motion of the wire is towards the left then the current will be pointing downwards. Relate that to part of the circuit parallel to the moving "arm PQ" and the circuit will be counter clockwise. :)

Here's an image of what the rule looks like: http://www.daido-electronics.co.jp/english/qa/magnet_lexicon/ha/images/ha13.gif

and I hoped this helped. Best of Luck, An IB Diploma Year II student

Using LORENTZ FORCE negative charge accumulates At point P while point Q gets positively charged. Thus the current shown in the figure is correct one.

Remember that if you have a battery the conventional current (movement of positive charges) inside the battery flows from the negative terminal to the positive terminal.
The moving rod is a seat of emf and so the current flows from its negative end $P$ to its positive end $Q$ and then in the external circuit flows from the positive "terminal" $Q$ to the negative "terminal" $P$ .
So the (conventional) current direction should be shown to be clockwise and not anticlockwise as in your diagram.

If negative charges ($q=$ -ve) are considered then the Lorentz force shall have to be in opposite direction (towards P not Q) $\Rightarrow$ current is from P to Q hence the Textbook diagram shows incorrect current flow direction.

I think the X's represent magnetic field going out of the page. If this is true, than the current will indeed be in the counter-clockwise direction, as the book says.

Additionally, your analysis of this situation using the Lorentz Force Law is perfectly correct, which is consistent with the textbook.

Not the answer you're looking for? Browse other questions tagged electromagnetism electric-current electromagnetic-induction textbook-erratum or ask your own question.

2
Faraday's saw from Lorentz force in the case of a moving conducting rod: how must the vectors be oriented?