My textbook, Solid-State Physics, Fluidics, and Analytical Techniques in Micro- and Nanotechnology, by Madou, says the following in a section on X-Ray Intensity and Structure Factor $F(hkl)$:

We now mathematically derive the intensity profile of x-rays scattered from a crystal. The result, as Laue predicted, is the same as for visible light diffracted from an optical grating. When an incident x-ray beam travels inside a crystal, we assume that the beam is not much influenced by the presence of the crystal; in other words, the refractive index for x-rays is close to unity, and there is not much loss of energy from the beam through scattering, i.e., elastic scattering dominates!

With reference to Figure 2.27, we assume two parallel plane x-ray waves of wavelength $\lambda$ and frequency $v$ (hence velocity $c = \lambda v$), scattered elastically from two nearby atoms $A$ and $B$ of identical scattering density. The wave vector for the incoming wave is $\mathbf{k}_0$ and that of the diffracted beam is $\mathbf{k}$. Because we assume elastic scattering:

Scattering atom $A$ is at the origin, and scattering atom $B$ is at a distance $r$ away from the origin. The path difference, or phase factor, between the waves can be calculated from Figure 2.27 as: 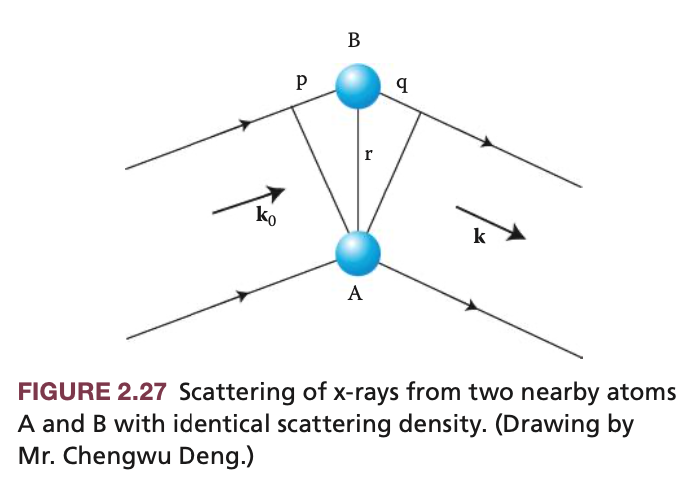 I found the derivation of 3.2 from figure 2.27 to be unclear, so I performed further research. I found the paper X-ray scattering (2016) by Ungar, Goran & Chen, Zhihong & Zeng, Xiangbing. Section 1, Brief introduction to X-ray scattering, says the following:

X-rays are scattered by electrons in matter. The classical interpretation is that an electron as a charged particle oscillates under the effect of the oscillating electric ﬁeld of an incident X-ray beam, and hence emits an electromagnetic wave of the same frequency/wavelength. The intensity $I_e$ of the beam scattered by an electron is given by the Thomson equation: 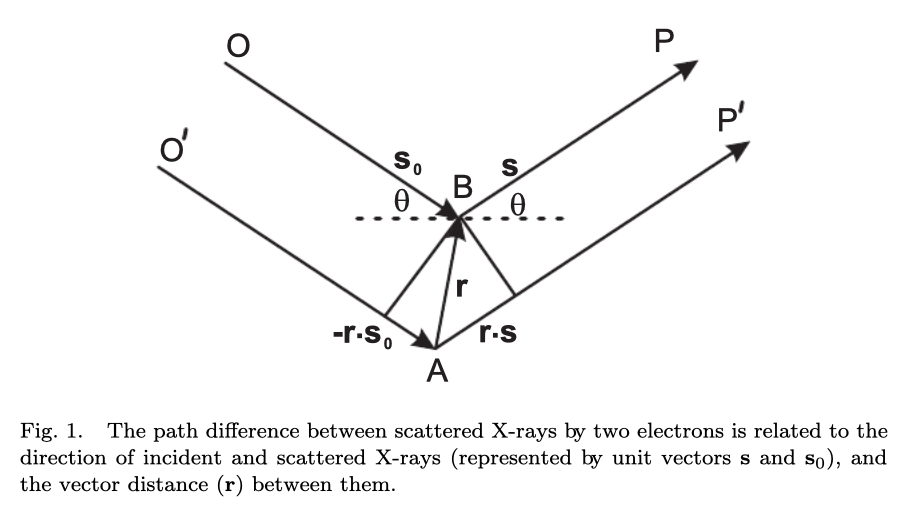 where $\mathbf{s}_0$ and $\mathbf{s}$ are the unit vectors of the incident and scattered X-rays. Hence, the phase difference is

Previously in the textbook, the authors state the following: 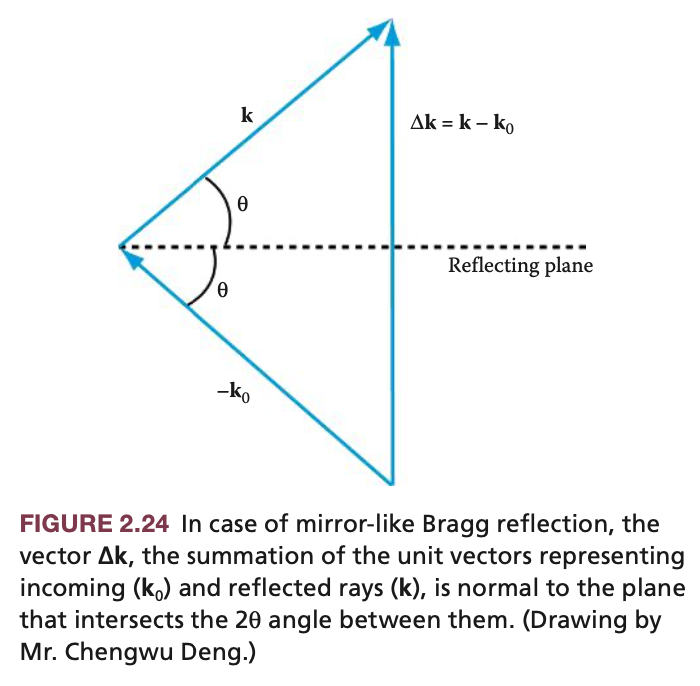 This actually produces a calculation that agrees with that of the paper:

However, my confusion is that it is still not clear to me what $p$ and $q$ are supposed to be in the textbook, and, therefore, what $p + q$ is?

I would greatly appreciate it if people would please take the time to clarify this. 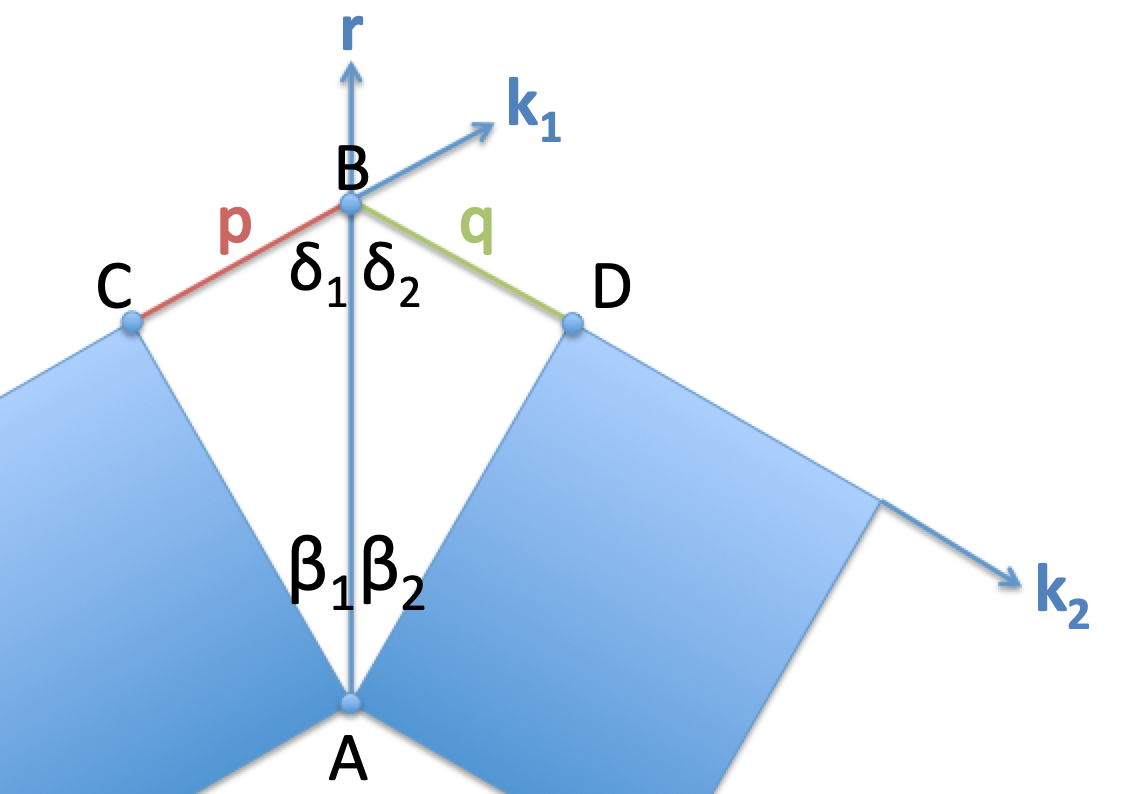 Instead of using the index "zero" and "no index" I prefer to use "1" and "2". I also included some angles and draw the direction of the used vectors explicitly -- I reckon this is the main problem you had. There is not enough space left, so I omitted the distance $r$. Please note, that $r = \overline{AB}$ is the distance between point $A$ and point $B$. 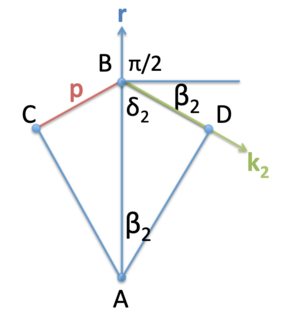 where in the second step we use a trigonometric identity and in the last step we used the findings from above.

So, to explicitly answer your question,

Not the answer you're looking for? Browse other questions tagged waves electromagnetic-radiation scattering x-ray-crystallography braggs-law or ask your own question.