How can the angular velocity vector be obtained from angular displacement which is not a vector?

My physics book (The Fundamentals of Physics) while explaining vector-ness of angular quantity (formally "Are Angular Quantities Vectors?") states that angular velocity and angular acceleration are vectors. But the turning point comes when it talks about angular displacement and states that it isn't a vector. Here is the statement from the book:

Angular Displacements.
Now for the caution: Angular displacements (unless they are very small $^{\dagger}$) cannot be treated as vectors. Why not? We can certainly give them both magnitude and direction, as we did for the angular veloc city vector. However, to be represented as a vector, a quantity must also obey the rules of vector addition, one of which says that if you add two vectors, the order in which you add them does not matter. Angular displace ments fail this test.

Then to justify the statement it made it gives two amazing examples (yes I'm a bit excited because I used to think all angular quantities behave as vectors). One of book and other of hand. 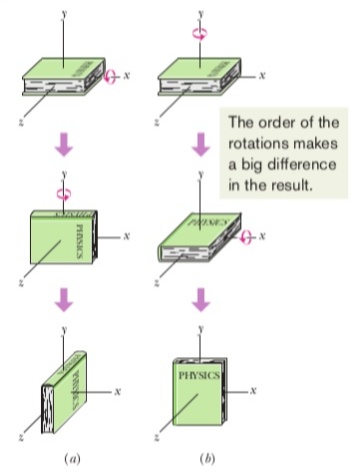 Example of Hand: Hold your right arm downward, palm toward your thigh. Keeping your wrist rigid,

Your palm faces forward. If you start over, but reverse the steps, which way does your palm end up facing?

From either example, we must conclude that the addition of two angular displacement depends on their order and they cannot be vectors.

The key is in the parenthetical statement in your first block quote: focus on the "unless they are very small" part. This can be seen by doing the simple "experiment" below. While this answer is not mathematically rigorous (for the rigor, see @The_Sympathizer's answer), I think it gets at the heart of the idea behind how we can get angular velocity as a vector from angular displacements. This experiment is from a "discussion question" exercise from Sears & Zemansky's "University Physics with Modern Physics" 13th edition:

Although angular velocity and angular acceleration can be treated as vectors, the angular displacement $\theta$, despite having a magnitude and direction, cannot. This is is because $\theta$ does not follow the commutative law of vector addition.

Now start over again but carry out the two rotations in the reverse order. Do you get a different result? That is, does $\theta_1+\theta_2$ equal $\theta_2+\theta_1$?

Vectors are mathematical expressions which should transform in the right way. Vector transformation means the way common vectors (like displacement) transforms under the translational or rotation of coordinate system.

Can a vector arise from a non-vector quantity?

Yes and they always do. Gradient of any scalar field is a vector field. There is also possibility of converting a vector into a scalar, divergence of any vector is a scalar.

This answer is probably too advanced for the OP, but might be interesting to those who have studied more advanced math or physics. (I mean this entirely respectfully.)

Infinitesimal rotations are a qualitatively different beast, and are represented by the elements of the Lie algebra $\mathfrak{so}(3)$ (note the different font and capitalization). $\mathfrak{so}(3)$ is indeed a vector space and is isomorphic to $\mathbb{R}^3$. (However, it has some additional algebraic structure in the form of the Lie bracket, which geometrically corresponds to the cross product and contains the information that reflects the failure of finite rotations to commute). So infinitesimal rotations really are vectors, and can be equivalently added together in any order.

share|cite|improve this answer
answered Jan 21 at 3:47

Angular position can be considered a vector $\vec \theta$. Just not a so-called geometric vector (or Euclidean vector).

The author of your text book implicitly refers to geometric vectors, it seems. Many mathematical operations are defined for geometric vectors only, since we here see high degrees of symmetry and thus see simple relations such as the commutative law (that the order of added parts doesn't matter).

Whether it is mathematically consistent that geometric and non-geometric vectors are each others' derivatives, might be a better question for the Math SE site. Else, possibly you can find some explanations by searching for geometric calculus.

But even those derivates still do not fully behave like geometric vectors - for instance, the superposition principle does not apply to angular velocity (not in 3 dimensions, at least). If you make an object spin about all three axes, you will not see them "merge" into one resultant angular velocity, as you would see with linear velocities (actually you will, but that axis is no fixed). Instead, all three motion overlap in a bulgy and "tumbled" spin.

Angular displacement has to specify a plane. Then it is a vector as long as you only add it up with corresponding vectors( of the same plane).

Not the answer you're looking for? Browse other questions tagged newtonian-mechanics vectors rotational-kinematics rotation angular-velocity or ask your own question.

8
Physicists definition of vectors based on transformation laws
5
Can an angle be defined as a vector?