Why is energy absorbed by the battery when the plates of a parallel plate capacitor are pulled apart?

It is said that when the plates of a parallel plate capacitor connected to a battery are pulled apart to increase the separation, energy is absorbed by the battery and no heat is produced during this process.

For example, let us consider a parallel plate capacitor of capacitance $C$ with plates having area $A$ and separated by a distance $d$. Suppose the plates are maintained at a potential difference $V$ by a battery and the plates are pulled apart to increase the separation to $2d$, the capacitance reduces by a factor of two in accordance to $C=A\epsilon_0/d$. The energy stored in the electric field also reduces to half its original value in accordance to $U=CV^2/2$. I determined the work done by the external force which increases the separation to be half of the energy stored in the field initially i.e., $U/2$. The work done by the external agent increases the energy of the system.

Why is this energy $U$ absorbed by the battery? Why shouldn't it be liberated as thermal energy (heat) as it happens during charging of a capacitor?

I read the answers to the following questions, but still my doubt on why should the energy be absorbed by the battery instead be liberated as heat exists:

Why is this energy $U$ absorbed by the battery? Why shouldn't it be liberated as thermal energy (heat) as it happens during charging of a capacitor?

The answer is that your analysis has no resistance in the circuit.

That extra work done by the external force in separating the plates is the source of the heat dissipated by the resistive part of the circuit.

When the plates of a parallel plate capacitor are pulled apart while battery remains connected, the potential difference between the plates remains equal to that of the EMF of the battery as the plates are connected to the terminals of the battery through conducting wires. The battery gets charged during this process. Heat is not liberated when there is no resistance in the circuit, but in the presence of resistance some amount of heat is liberated as discussed in the answer above.

Now lets focus on the question "Why does the battery absorb energy in the first place?". When the plates of the capacitor are pulled apart, its capacitance or the ability to store charge decreases and so the magnitude of charge on either plates reduces. So as we gradually increase the separation between the plates, excess charge on one plate slowly moves to the other plate through the battery as given below: 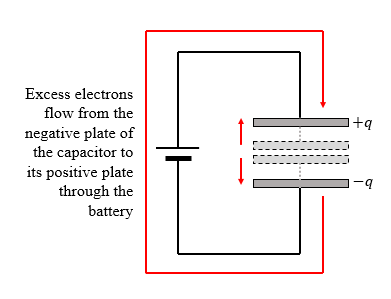 On the whole, the following equation gives a good idea of how is energy stored and how much of it is stored (in parenthesis) in the process described in the question:

Not the answer you're looking for? Browse other questions tagged electrostatics energy charge capacitance batteries or ask your own question.

19
What happens to half of the energy in a circuit with a capacitor?
3
Where does all the voltage go?
3
Work done in submerging a weightless sphere, I am getting exactly half the correct, can someone point out my mistake!
2
Is it possible to use a capacitor to cool the surrounding medium by pulling its plates apart while remaining connected to the battery?
-1
How is Capacitance affected by a seperation distance and with or without a battery?

2
Why does it seem that the potential difference dependence of capacitance and total energy stored in a parallel-plate capacitor are contradictory?
21
Why does the voltage increase when capacitor plates are separated?
2
Energy Stored In A Capacitor (Slowly Moving Parallel Plates Together)
2
Is it possible to use a capacitor to cool the surrounding medium by pulling its plates apart while remaining connected to the battery?
0
Capacitive circuit
0
Capacitor with intially having charge $q$ on both plates and then battery connected
1
Why significant change in permittivity can be observed for parallel plate capacitor? (multiple dielectric plates)
0
Inserting a dielectric in a parallel-plate capacitor