I understand the equivalence principle as "The physics in a freely-falling small laboratory is that of special relativity (SR)." But I'm not quite sure why this is equivalent to "One cannot tell whether a laboratory on Earth is not actually in a rocket accelerating at 1 g".

If one can imagine a freely falling elevator on earth, versus a spaceship flying in empty space, two test particles will actually feel a slight lateral attraction associated caused by the earth's gravitational field effecting the trajectory of the particles. 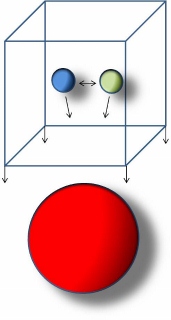 If you had no knowledge of the earth outside the elevator, you would equate the attraction of the two test particles with a gravitational force between the particles.

Similarly if you were in the rocket ship and had no knowledge of the outside world and you had two particles that started gravitating towards each other, you might think that they are actually moving under the influence of a third massive body that was outside the spaceship pulling on the particles along two different paths.

Since it would be impossible to tell the difference, you have to conclude that there is an equivalence between those two frames of reference.

Similarly, if there is absolutely no measurable tidal force inside a freely falling elevator, one would have the same spacetime as used in special relativity.

Say there were two identical rooms with no windows, one on earth and one on a spaceship accelerating at 9.8 m/s^2 (acceleration due to gravity on earth.) You are in one of them, and can conduct any mechanical experiment you like as long as it does not involve peeking outside of the room in any way shape or form.

Unfortunately no matter what you try you will not be able to determine which room your in because experiments in both rooms will yield identical results.

However one room is experiencing gravitational acceleration and the other inertial acceleration. The principle of equivalence tells us that these two things are equal, or as Einstein said "The outcome of any local non-gravitational experiment in a freely falling laboratory is independent of the velocity of the laboratory and its location in spacetime."

The equivalence principle (the version you mention) means that you cannot tell, locally, whether you are in a freely falling frame or in "outer space", i.e., in a region of space with no gravitational field. This version is the EEP. There is another version, namely, WEP which says that the inertial mass is the same as the gravitational mass. This means that when standing on earth, the force you experience is proportional to your gravitational mass, which is the same mass that you would put in Newton's second law. Thus, if you are in a rocket accelerating at 1g you will experience the same force. Now, from WEP you see that if you throw a ball upwards, the trajectory it follows will be the same on earth and in the rocket. Therefore we can reformulate WEP in terms of freely falling objects: locally, the motion of freely falling particles are the same in a uniformly accelerated frame and in a gravitational field. Of course, WEP doesn't imply EEP because in SR the mass is not unique. But it is easy to see that you can generalize it by imposing SR in the motion of the objects. However, EEP is stronger in the sense that not only the trajectories are the same, but all laws of physics. This is the basis of QFT.

The way it makes sense to me is that if you shoot a ray of light across a room inside an accelerating rocket ship, the ray will fall some distance (relative to the room). Therefore on Earth the ray of light must also fall (ostensibly "due to gravity"), otherwise you would know whether you are in a ship or not based on whether light does or does not fall. And I imagine there would be some kind of physical consequence to that. The following video seems to imply that the consequence would be that inertial mass and gravitational mass would not be the same, which makes intuitive sense to me.

This is a video from "The Mechanical Universe." It's a good overview of the deduction. http://www.youtube.com/watch?v=VbOKxkj0_wc&feature=youtu.be&t=13m24s

I'm not sure if the O.P. was satisfied with the previous answers or not but I feel that there is something that wasn't answered, at least in the way that the question asked for it. The reason why the equivalence between a free falling system and a Special Relativity Rest Frame implies the equivalence between a laboratory on Earth and a rocket accelerating at 1 g is this:

1) First, notice that a laboratory in earth is not the same system as a free falling system, altough both of them feel gravity. The laboratory (or just elevator) on earth is meant to represent a system that feels gravity but holds its place do to some other force, namely, the normal in the ground or the tension in the elevator.

2) Suppose that the first equivalence is right: A free falling system is equivalent to a rest system in Special Relativity. Great, how we get to the second equivalence?

5) So, an elevator hunging up in Earth is the same as a elevator feeling a force upwards with no gravity.

This is the logical way to go from the first equivalence to the second one, just add the tension in the elevator to go from "free falling system" to "Laboratory on earth" so that the second part of the equivalence goes from "rest frame of Special Relativity" to "rocket going upwards at 1g".

Not the answer you're looking for? Browse other questions tagged general-relativity equivalence-principle or ask your own question.

0
Consequences of Einstein's Equivalence Principle
0
falling in a gravitional field
14
Is the lay explanation of the equivalence principle wrong?