Coefficient of friction between inclined plane and ground 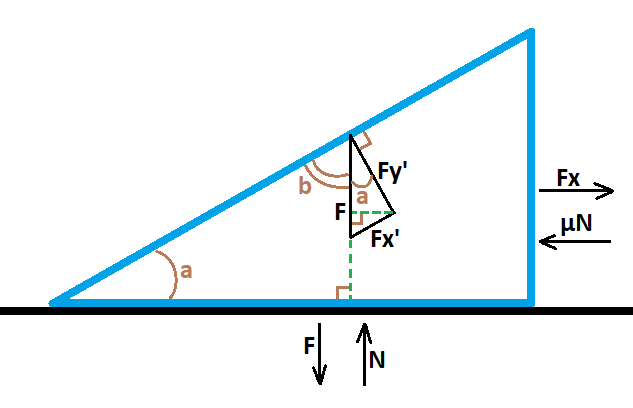 Apply a vertical force to an inclined plane. What coefficient of friction is required between the bottom of the plane and ground to keep the system in equilibrium?

Referencing the image, the vertical force $F$ should subject the plane to some amount force in the horizontal direction. To maintain equilibrium, the coefficient of friction $µ$ must be great enough to satisfy:

I am having trouble identifying $F_x$. If it were a sub-component force of $F'_x$ and $F'_y$ then the forces would cancel out. Ultimately, my evidence supporting the existence of $F_x$ is that an object sliding down the plane would move horizontally and should induce complimentary motion in the plane.

I am slightly ashamed to admit that I am not a student, but someone who shouldn't need to ask this question! I was hoping for an explicit response, as this is not a homework question. I have read the relevant force analysis of power screws, which yields the following equation when simplified by ignoring friction and using square thread. The question being answered in this analysis is, what torque is required to raise a load W using a power screw?

Which should mean that $F_X$ in the inclined plane problem is: $F_x=F*\frac{\sin{a}}{\cos{a}}$. I can't figure out how to get to this answer and my reference does not show the steps.

Assuming that the sloping face of the plane is frictionless, any applied force $P$ must be normal to the surface, at an angle of $a$ with the vertical. (This is your force $F_y'$.)

Where you went wrong is when you drew a triangle to resolve $F$ into components. Probably you assumed that the applied force could not have any horizontal component because you were not told about it. But there must be one to ensure that there is no applied force parallel to the surface.

Not the answer you're looking for? Browse other questions tagged newtonian-mechanics forces friction vectors free-body-diagram or ask your own question.

-1
Rotational Torque Versus Thrust on a Screw