Why does a weather vane arrow point in the direction of the wind?

It seems that a weather vane will rotate in order to minimize energy and thus orient itself parallel to the wind.

What I do not understand is why it is implied that the weather vane arrow should point in the direction of the wind.

I do not understand why the arrow pointing in the opposite direction of the wind is also not a minimum energy solution. 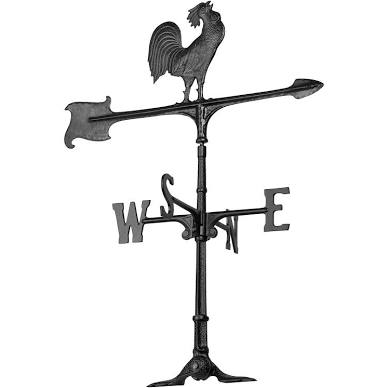 The vane has to be designed so that it has a preference to point in the right direction. In the example that you included, this is implemented by the flag at the back providing a broader cross section than the arrow head and also by the rooster standing slightly to the back half of the arrow.

You are correct that if the vane became perfectly anti-aligned to the wind, it might stay there for a bit. That solution, however, is an unstable equilibrium solution. If the wind shifts even a little, assuming the vane is well-designed, it should snap around to the proper direction for the reasons above.

share|cite|improve this answer
answered Jan 14 at 8:14

In designing your wind vane therefore, the part that you desire to be pointing away from the direction from which the wind is blowing should have the greatest product of (surface area) X (distance from the fulcrum).

In the image posted with your question, the rooster and the arrow head at their positions and sizes are merely decorative. A wind vane with only a tail of similar shape to that in your image, attached to the fulcrum would work just fine. Users would need to understand that it is pointing in the direction in which the wind is going, not where it is coming from. It also follows that if the arrowhead were large enough in area and far enough from the fulcrum, then it would point away from the direction from which the wind is coming.

share|cite|improve this answer
answered Jan 14 at 10:41

While it's possible to analyze this in terms of least energy, it's not very straightforward. That's because it's not the weather vane's energy that is being minimized, but the wind's. The wind does work on the weather vane, which then causes friction, converting the energy to heat.

Suppose the weather vane starts out perpendicular to the wind and rotating. One side will be coming towards the wind, and therefore doing work on the wind. The other side will be going the same direction as the wind, and wind will be doing work on it. Work is force times distance, and the distance a rotating object travels is proportional to the radius, so the wind will be doing net work on the vane if the side moving in the same direction as the wind has a larger mass*radius (i.e. moment of inertia) than the other side. Thus, minimizing the energy of the wind means the side with larger moment of inertia moves in the direction of the wind. This means it moves towards pointing to the side the wind is blowing. Once it reaches the side the wind is blowing, any perturbation away from that side results in a torque back.

BTW, systems don't always move to the configuration with lowest energy. Rather, they tend to move in the direction in which energy is decreasing, which means that once they reach a point where the energy isn't decreasing in any direction, they stop. For instance, if you put a ball on the top of a hill perfectly balanced, it will stay there. This is an equilibrium, because the derivative of energy with respect to position is zero. But it's an unstable equilibrium, because the second derivative is negative.

share|cite|improve this answer
answered Jan 14 at 18:22

When we model aerodynamic forces like this, one of the very useful tools is a "center of pressure." The center of pressure is a point where you can pretend all of the aerodynamic forces are exerted on that point and get the correct behavior. It can move as the angle of attack (AoA) changes, meaning the angle between the vane and the wind, but at any position you can analyze it as though all of the forces are on a single point.

Note that the tail of the vane has a much larger square, compared to the triangle. It has a larger surface. Generally speaking, this means the center of pressure will be closer to the tail.

So what happens if the vane is pointed backwards? If the vane is backwards and kicked to the left, the pressure on the tail (which is upwind) is to the left. Since the center of pressure is now in front of the center of rotation, this will cause the vane to swing around further, until the vane points in the right direction. The weather vane is unstable when "flying" backwards.

You can get the situation you describe, where the vane points the wrong way. Say the wind is coming from the north, and then dies down. The weathervane is thus pointing north. If the wind shifts and picks up from the south, precisely, the side to side forces are zero. However, if it shifts just a little bit off of south (and winds are never perfect), for just a brief moment, that will turn the weathervane a bit. Now, even if the wind returns to being perfectly from the south, the weathervane is no longer pointed directly north. The instability will cause the vane to swing around so that there's no longer that metastable point from the south.

In practice, the bearings on the vane are not perfect, so you have to get a wind that's reasonably far from the south before you'll actually move the vane. However, winds are also decidedly not smooth. They have small gusts which will drive the vane out of that metastable point, and then it will point in the correct direction.

share|cite|improve this answer
answered Jan 15 at 15:00

Wind vane will always point to the direction from which the wind is blowing.

I.E., if wind is blowing from East to West, then the arrow of the wind vane points to 'East'.

The pointed end of the arrow offers least resistance to wind. Therefore, the arrow achieves the state of equilibrium by pointing itself against the wind (Direction from which the wind is blowing).

share|cite|improve this answer
answered Jan 16 at 1:39

Not the answer you're looking for? Browse other questions tagged fluid-dynamics drag flow aerodynamics or ask your own question.

3
Does wind speed things up or accelerate things?
7
Number of blades in a helicopter rotor
15
Why is a beam reach the fastest point of sail on modern sailboats?
3
Explaining the shape of a raindrop and a drop of mercury
1
Does aeroplane moving against Earth's rotation cause relative wind (assuming otherwise a quiet weather outside)?
1
Confusion about signs in this kinematics question?
0
How to use General Energy Equation in parallel pipes?
0
Details about mechanics of directly-downwind-faster-than-wind vehicle