What rotations occur due to gravitation for a body placed/anchored at Lagrange point $L_1$ in the Sun-Earth system, which is an unstable equilibrium point?

Is the rotation axis vector normal to the solar planetary system ecliptic plane?

L1 is a saddle point in the potential: 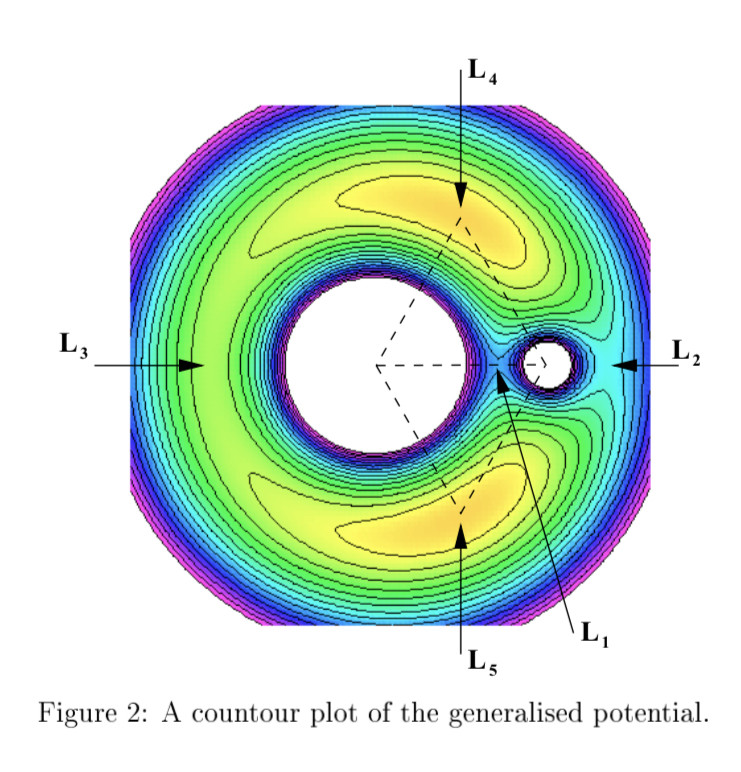 As such, a body at L1 feels tidal forces.

An extended body will tend to align due to these tidal forces.

This is similar to behavior near just one planet, where extended bodies align up and down. In close orbit, like ISS, the stable orientation is to rotate once per orbit, so that “up and down” are always toward the planet.

The same will be true for L1: tidal forces will tend to align an extended body so that it’s turning once per orbit.

Not the answer you're looking for? Browse other questions tagged angular-momentum orbital-motion solar-system celestial-mechanics satellites or ask your own question.

13
James Webb Space Telescope's halo orbit at Lagrange point L2
6
What is the scientific reason for the inclination of earth's rotation axis?
5
Does total angular momentum of the Earth-Moon system include individual rotational angular momenta?
0
How explain this perturbing equation about the 43 arcseconds?
2
What would Earth have been without the Moon?
3
Intuitive understanding of Lagrange point L3
2
Why Has The Orbit Of Mercury Such A High Inclination To The Ecliptic?
1
Why Earth's axis is in this particular position with respect to the perihelion?
0
Would Earth always face Sun the same way if Earth didn't rotate around it's axis?