I asked this question on Physics Stack Exchange - "Can Increment / maximization of Entropy be the “Cause” behind any phenomena?"

To which I received a beautiful explanation with a bewildering example. I quote the example below. In the example, it seems the Second Law of Thermodynamics is more powerful than Newton's Laws and if there is a conflict between the two, then the second law wins! And this is where I have the question - Can Second Law of Thermodynamics / Entropy override Newton's Laws?

Following are some specific questions:

Following is the example:

I remember witnessing a demonstration that the above abstract example is a close analogy to.

The demonstration involved two beakers, stacked, the openings facing each other, initially a sheet of thin cardboard separated the two.

When the separator was removed we saw the brown color of the Nitrogen dioxide rise to the top. In less than half a minute the combined space was an even brown color.

And then the teacher explained the significance: in the process of filling the entire space the heavier Nitrogen dioxide molecules had displaced lighter molecules. That is: a significant part of the population of Nitrogen dioxide had moved against the pull of gravity. This move against gravity is probability driven.

I think the above example counts as a case of probability acting as a causal agent.

No. In the example given, every particle obeys Newton's laws. There is no particle that is not obeying $F=ma$.

Again, no. The second law describes how Newton's laws combine with the laws of probability. There is no other "force" acting in the problem.

The Second Law simply expresses that this random motion will result in a mixture of the gases. It does not contradict Newton's laws, but expresses the inevitable consequences of them.

The thermal motion has to be taken into account in any understanding of the example. It’s just as important as gravity.

When both effects are present, they have to balance out. And they do that through collisions and motions that obey both Newton’s laws and thermodynamics.

About the relation between Energy and Entropy:

About the demonstration of the denser gas diffusing to fill available space. I grant you that is counter-intuitive. We are accustomed to thinking that there is no such thing as spontaneously moving against a force. We expect that stones never roll uphill.

But yeah, in a sense that is what happens in the case of the denser than air gas diffusing in upwards direction; the denser gas is moving uphill.

So: energy isn't the only game in town, there's entropy too.

(No doubt there are also examples where energy and entropy are acting in the same direction, so that their influences add up. But it's interesting to see them pitted against each other.)

Whenever energy and entropy are acting in opposition to each other the system will evolve towards an equilibrium state.

You can manipulate where that equilibrium falls by manipulating the conditions. For instance, in biology labs a standard piece of equipment is a microcentrifuge.

An extreme example of this is ultracentrifugation to separate isotopes of Uranium. This separation process is actually gas centrifugation. Uranium hexafluoride is gaseous. With the ultracentrifuge spinning sufficiently fast the level of separation of U-235 and U-238 can be pushed to a point where it is an economically viable way of enriching Uranium.

Note that centrifugation doesn't give complete separation. Furthest away from the spin axis the gas becomes somewhat U-238 enriched, the gas closer to the spin axis becomes somewhat U-238 depleted. Complete separation is too improbable to happen, even at the extreme spin rates of ultracentrifugation. The effect of the high G-load is that the equilibrium is shifted

I think the source of the confusion here is that you think of the blob of NO2 gas as "a thing". Then, you see this "thing" doing spontaneous work against gravity, and assume: "Hey, Newton says it should stay at the bottom, but it doesn't!" So there are two problems involved with the naive explanation.

The first is that the blob of gas is only "a thing" because of its container. The beaker is really the only thing binding the gas (technically, there is a trivial amount of gravitational attraction, but I hope we agree that this is many orders of magnitude too small to be of interest here). If you took the gas out of the beaker, by tipping the beaker over, you would very quickly see this gas cease to be "a thing", as it diffuses into the surrounding air.

What happened? Did the gas cease to exist? Of course not. The molecules of the gas just all went their separate ways. The only way to explain the dissolution of the gas blob is to consider it as a collection of molecules, each obeying Newton's laws to the extent of its accuracy (I hope we agree that the molecules are probably all moving non-relativistically here). That's what the other answers are trying to tell you. The gas is not "a thing". It's a bunch of things. A bunch of billiard balls bouncing around very Newtonianly.

The other problem is that work is being done, and a cost is being paid, and in any other context, you would not think anything unusual about the "transaction" occurring here. The quote clearly states that heat provides the work necessary to move the NO2 upwards against gravity. I'm guessing you have seen this principle at work elsewhere. Now, this isn't exactly the same case as the hot air balloon, because the NO2 is presumed to be at the same temperature as the air above at the start of the demonstration. But if you consider that the temperature of the mixed gases is lower than the pure NO2, then from that perspective, the NO2 is indeed "hot" and is rising due to this "excess heat", to put it simplistically.

The Second Law of Thermodynamics says that isolated systems move toward higher entropy macrostates. The rules of the system (Newton's Laws, interactions between entities, Quantum Mechanics) say what states are available.

If there are no (or weak) forces in the system (an ideal gas), then thermodynamics says that the molecules will tend to be spread evenly over the box since there are more ways to be spread evenly than there are to have all the molecules in one corner. However, if you include an external gravitational field, the effect of gravity on the states available to the system has to be accounted for in determining the maximum entropy macrostate. When there are more molecules near the bottom of the box than near the top, there is more kinetic energy available and hence more possible momentum values for the molecules. So, there is a competition between position entropy that is maximized for a uniform distribution of molecules and momentum entropy, which is maximized when all of the molecules are at the bottom of the box and the most kinetic energy is available. The final molecule distribution that maximizes the entropy will depend on the mass of the molecules, the acceleration of gravity, the distance between the top and bottom of the box, and the total energy available (or the temperature). Maybe you can see now how Newton's Laws and the Second Law come together to determine the equilibrium state.

Is there really an underlying "force" behind the second law of thermodynamics, which drives the system in a particular direction?

Yes, thermodynamic forces are real and can be measured.

Thermodynamic forces have the same character as centripetal force in classical mechanics. If an object is moving in a circle, you know that a centripetal force is applied, but you don't necessarily know the underlying interactions actually make it happen. They can be tension in a string, gravity, electrostatic force, etc.

Likewise, The Second Law of Thermodynamics can tell us that an average force exists, even if we don't know the interactions that give rise to the average force (which could by supplied by Coulomb's Law or van der Waals forces or Quantum Mechanics).

Below we have a collection of identical molecules with some kind of repulsive forces between them bouncing around a box with a bottleneck. The Second Law of Thermodynamics tells us that, at equilibrium and on average, a molecule at the position of the red molecule will feel a force toward the right simply because there are more ways to put molecules in fat part of the box than in the skinny bottleneck. The interactions between the molecules and between the molecules and the walls that give rise to this average thermodynamic force might be electrostatic, van der Waals, Pauli exclusion, etc. 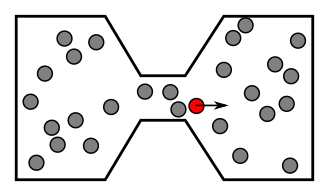 Not the answer you're looking for? Browse other questions tagged thermodynamics statistical-mechanics entropy statistics information or ask your own question.

1
Can Increment / maximization of Entropy be the "Cause" behind any phenomena?