Is it possible to create a photo-electron with 2 low energy photons?

We all familiar with the famous PE observation and Einstein's explanation. If a photon has energy less than the electron's binding energy, then there will be no PE observed. However, I am wondering if a low energy photon that has energy equal to M-K shell energy difference and able to excite the K-shell electron to M shell can then subsequently interact with the second photon through photo-electric effect to escape. Possible, even if the probability is near 0, or impossible?

The first experimental observation of the two photon photoelectric effect was in 1964.

They used Cs3Sb1 and laser irradiation, with 1.17 eV, which as you describe is far below the threshold (the work function of the electron), but the process is still satisfactory. You can see that this is a higher order process and the linear function (one photon process) will dominate, but at high intensities the higher order process is possible, as you write, but the probability will be little. 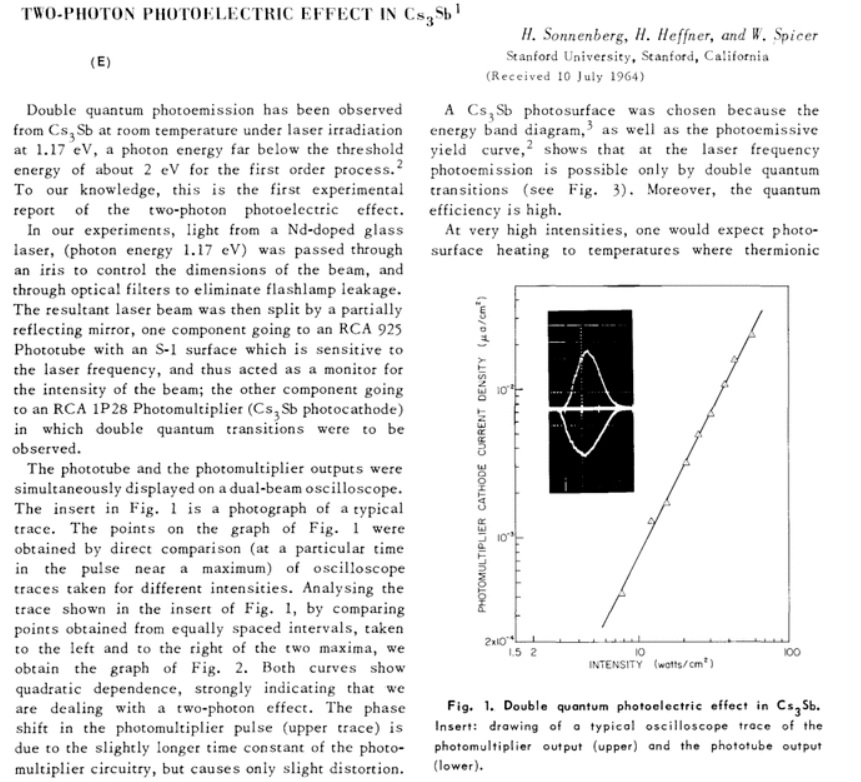 More than one photon can be absorbed, but the probability is minute for usual intensities. As a scale for "usual intensities" note that sunlight on earth has an intensity of about 1000W/m2=10−1W/cm2. The intuitive reason is, that the linear process (an electron absorbs one photon) is more or less "unlikely" (as the coupling between the em. field and electrons is rather weak), so a process where two photons interact is "unlikely"2 and thus strongly suppressed. So for small intensities the linear process will dominate distinctly. The question is only, at what intensities the second order effects will become visible. In the paper by Richard L. Smith, "Two-Photon Photoelectric Effect", Phys. Rev. 128, 2225 (1962) the photocurrent for radiation above half of the cutoff frequency but below the cutoff frequency is discussed. They note that for usual intensities the photocurrent will be minute, but that given strong enough fields such as those observed in a focus spot of a laser (on the order of 107W/cm2) the effect might be measurable. They also note, that thermal heating by the laser field may make the pure second order effect unobservable.

Photoelectric effect – Why does one electron absorb one photon?

There is two-photon photoemission, for example on a silver surface where the electron is first excited to a long-lived image state on the surface. The second photon then excited this bound state to a state with sufficient energy to overcome the work function.

Not the answer you're looking for? Browse other questions tagged atomic-physics photoelectric-effect or ask your own question.

1
Specific electron energy gap values $E_{i+1}-E_i$ vs. photons with arbitrary energy $\hbar \omega$
11
How do photons know they can or can't excite electrons in atoms?
0
Can all energetic photon excite an electron?
1
Photon interactions with photovoltaic cells
0
Why does MPI require high intensities?
8
Electron falling into proton approaches infinite kinetic energy why?
0
How can photons excite multiple atoms in a szintillator?
1
Does a 9,192,631,770 Hz hyperfine transition create 9,192,631,770 photons per second, or fewer?