Neglecting friction on a pulley?

So, this is how the problem looks: 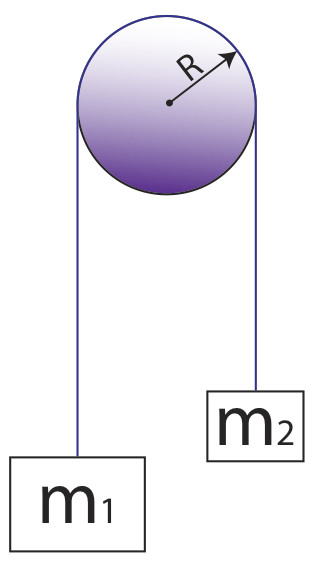 Plus, the pulley is suspended on a cord at its center and hanging from the ceiling.

You're given masses of the objects, mass of the pulley and it's radius. And your assumptions are that the string is massless and inelastic and that there is no friction between the string and the pulley. You have to find the tension in the string suspending the pulley (it's not drawn in this particular figure).

So, according to me, the tension in the string suspending the pulley would simply be the tension along the rope multiplied by two.

But the solution includes a rotating pulley and its rotational inertia, and it gives a different answer. Where did I go wrong? And why? If not, how can I prove I'm right?

You're correct that if the pulley is frictionless the pulley wouldn't rotate. Most likely, the authors of the problem had in mind to say “this is an idealized physics problem” and didn't reason correctly about which parts of the system need this specified, or just wrote the wrong words or incorrectly simplified them during editing.

Here are some possible causes of energy dissipation that could be in the system that they arguably should have specified instead:

6
Pulley-rope tension question
3
Understanding tension based on assumptions of pulley system
0
Pulley with mass - what is happening in the rope that causes tension forces to differ?
0
Mechanics Pulley system
0
Real Pulley and Newton's Third Law
0
Tension about disk
1
Force and torque provided by a string on pulley