and it is quite simple to show the existence of homomorphism $\phi:{\rm SL}(2,\mathbb{C})\rightarrow L_0$ which is into but I am stuck at showing why it is onto.

The book provides a Lemma below but proving that, I am stuck at their claim that what they denote by $R_2$ is a rotation. (it is obviously transformation of $\mathbb{R}^3$, but how to see that it is orthogonal?)

One idea would be, if there existed some $D\in{\rm SL}(2,\mathbb{C})$, such that its action on the group of hermitian matrices would induce the transformation $\phi(M_r) S B$ on ${\rm M^4}$, then it would necessarily be unitary ($D\in{\rm SU}(2)$ since $\phi(M_r) S B e_0=e_0$) then all is well because unitary matrices induce orthogonal transformation (that i can show). But this would require the knowledge that the homomorphism is onto which is, however, the consequence of the Lemma.

Most of the relevant pages from the book can be found at google books preview.

Every proper Lorentz transformation, $B$, can be written as: 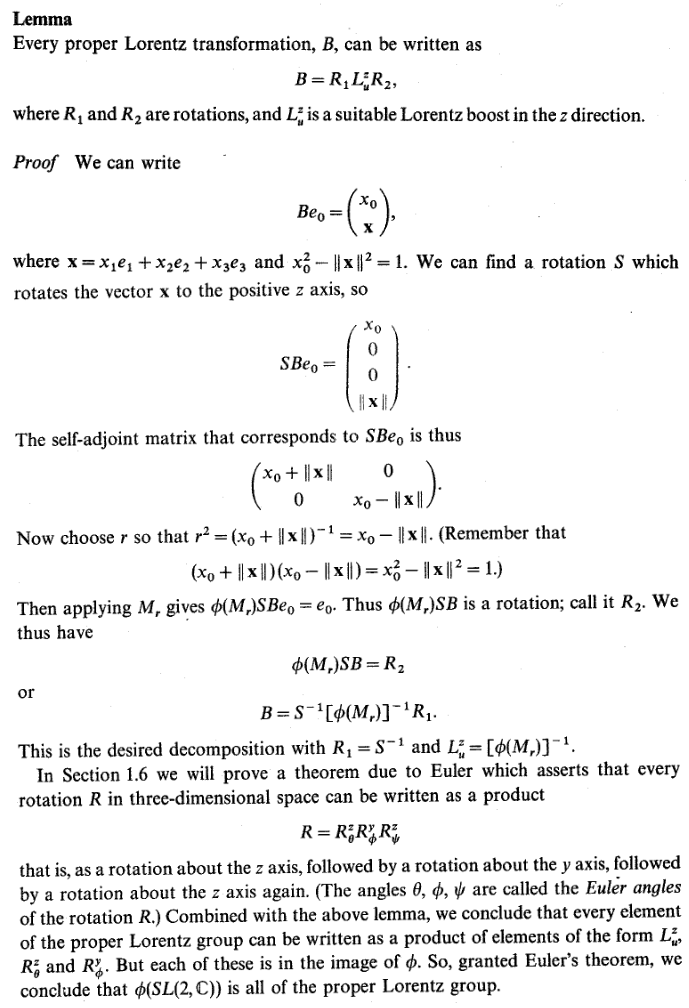 Browse other questions tagged special-relativity group-theory representation-theory lorentz-symmetry or ask your own question.

2
Please explain this statement about Lorentz transformations
11
Lie group Homomorphism $SU(2) \to SO(3)$
3
$(A,B)$-Representation of Lorentz Group: Coefficient functions of fields
15
Symmetries of AdS$_3$, $SO(2,2)$ and $SL(2,\mathbb{R})\times SL(2,\mathbb{R})$
2
How to construct generators and Lie Algebra for Lorentz group?
4
The derivation of the irreducible representations of the Lorentz group
1
Derivation of Lorentz boosts