Does the same temperature imply the same translational kinetic energy?

So I basically have three inter related questions.

And finally if the answer to the two previous questions are correct (for classic cases of course), considering a a liquid solid and gas at the same temperature, do they all have the same average translational kintetic energy?

But in melting lead, the classic approximation should be good. Then the atoms in the solid have the same kinetic energy as atoms in the liquid. Similar for boiling lead. 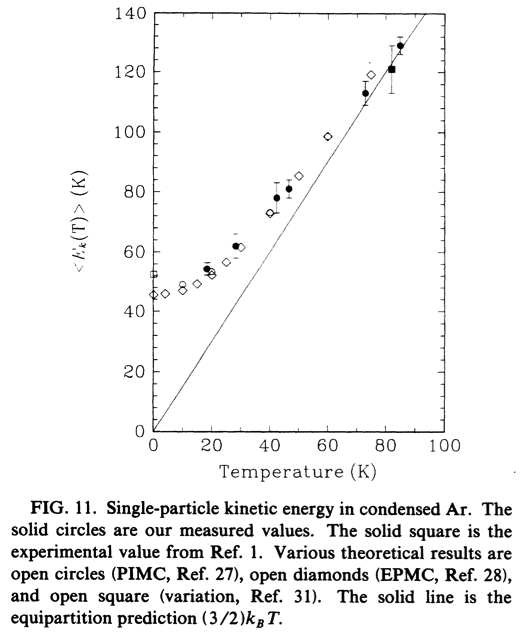 Rotating molecules seems a really different mode of kinetic energy. But in the cases where it is relevant it also contributes to temperature.

And finally if the answer to the two previous questions are correct (for classic cases of course), considering a a liquid solid and gas at the same temperature, do they all have the same average translational kintetic energy?

If a solid is in thermal equilibrium with a liquid, (or a gas) the kinetic energy of its atoms are being transferred all the time, so they must have the same average energy.

In the case of a solid, the atoms oscillate around an equilibrium position. In a sense, it is similar to internal vibration of molecules of gases or liquids, only that here it is the sole mode of kinetic energy.

In a classical system, temperature, which is an intensive quantity, does not measure directly the average kinetic energy (translational or not) which is an extensive quantity. The correct statement is that each kinetic energy term of the Hamiltonian contributes by $\frac12 k_B T$ to the average energy of the system (equipartition theorem). Therefore, the contribution to internal energy per molecule of all the translational degrees of freedom is always $\frac{3}{2} k_B T$. This result is independent on the kind of molecules (mono-, di-, tri-,... atomic) and on the specific thermodynamic phase (of course, provided temperature and density are such that quantum effects on translational degrees of freedom can be ignored.

Things are usually more complicate for rotational and vibrational energy of the molecules. In that case, even at room temperature, equipartition theorem cannot be used for some of the corresponding degrees of freedom and for those degrees of freedom proportionality between contribution to the internal energy per molecule and temperature may not be valid.

In conclusion, in the classical regime, solid, liquids and gases at the same temperature will always have the same average kinetic energy per molecule. Actually, the result is even stronger: not only the average kinetic energy per molecule, but also the velocity distribution function (the Maxwellian distribution) of the molecules is exactly the same, at the same temperature.

Not the answer you're looking for? Browse other questions tagged thermodynamics energy temperature atoms or ask your own question.

3
Why do different gases have the same average kinetic energy at the same temperature?