Like many others, I have been following the sad development of the bush/forest fires in Australia recently. A claim that gets repeated is that one of the contributors to this blaze is the ongoing >45°C heatwave.

Now I am not really putting this in question here. This is probably a well established fact, but my immediate intuition of physics fails to grasp why. Here's my reasoning:

So why does the heatwave matter?

This is more a question of chemistry and biology than physics.

Solid objects don't burn (try dropping a lit match on a piece of structural lumber sometime -- it'll just go out). Instead, they release or decompose into flammable gasses on heating, and it's those gasses that burn. Some plants (eg. pines) produce volatile resins that provide an easy ignition source, and the amount and speed of vaporization increases with temperature.

Eucalyptus is especially bad for this: eucalyptus oil is extremely volatile, extremely flammable, and produced in copious quantities. In hot weather, there's far more vaporized oil in the air than in more moderate temperatures, leading to easier fire starts and faster spreads. Eucalyptus has evolved not just to survive fires, but to encourage them, as a way to clear out competing plant species.

Water evaporates faster at higher temperatures, so plants will lose water faster in a heat wave than in milder conditions. Drier plants will catch fire easier and burn faster and hotter than moist plants.

EDIT – Due to the interest, while my previous answer was OK, I’ve summarised official Australian ABC (public broadcaster) Fact Checks on this subject to provide full and correct detail.

The three essentials on how bushfire behaves are: a) weather, b) fuel and c) topography.

In Australia, the Bureau of Meteorology produces ‘fire danger ratings’ in consultation with State authorities. While other risk factors are considered, the Forest Fire Danger Index (FFDI) of 1-100+, a formula developed by fire scientist Alan McArthur in the 60’s, is a major factor. This index combines measurements of air temperature (why heatwaves matter – indirectly via influence on fuel moisture content and local wind formation, plus the higher the temperature of the fuel, the more easily it will reach ignition temperature), relative humidity, wind speed and fuel conditions with a formula to account for the effects of drought, i.e. how long since it last rained/amount of last rainfall to assess how dry the soil is, and therefore how combustible the fuel is likely to be. 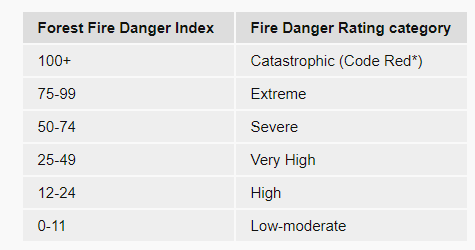 More re air temperature, worked example. If you download the NSW RFS Firefighter Pocketbook from the app store, you can see for yourself that all else being equal (say, 10% relative humidity, 15km/hr wind speed, lowest fuel load 1, drought factor 10, slope 0) an increase from 30 degrees to 45 degrees changes the FFDI from 34 (Very High) to 57 (Severe).

However, under extreme and catastrophic fire conditions, the McArthur model underpredicts the rate of spread and intensity. When you exceed a FFDI of around 50 you switch from a fuel-dominated to a weather-dominated fire. This is why there is a lot of focus/media reporting on the weather (air temperature, relative humidity and wind speed) in extreme and catastrophic fire danger rating periods. Basically, in those conditions (like we have been seeing) you only need the tiniest amount of fuel to produce a fire intensity that cannot be fought.

This is also why, with bushfires associated with an FFDI of >100, even in areas that have had hazard reduction burns less than five years prior, there has been proved to be no measurable effect on the intensity of the fires.

Prescribed burns, aka hazard-reduction fires, is therefore useful, necessary, and effective for lesser conditions, but even if you were to hazard burn everything to the max, its not going to give a benefit under ‘catastrophic’ fire weather conditions. Also, its not possible to hazard burn some of the areas now burning in NSW/VIC in cooler months, it is too wet.

But in anycase, the national parks have been hazard burnt. In the last 8 years in NSW, the NSW Parks & Wildlife carried out hazard reduction burns over 680,000ha – more than double that of the previous 5-year period. In QLD, in 2019 QLD Parks hazard burned 1.4M ha the largest area covered in the last 6 years. So there has been no ‘locking up’ of the national parks, they have been hazard burning more than ever, and yet the fires still burn – because of the weather, which of course, has been made worse by climate change.

There has been 3 years of drought, and 2019 was the lowest rainfall on record in many parts of Australia. The humidity in the parts of NSW and Victoria on fire now has been very low <10%, and there has been strong winds. Then, it has been very very hot, temperature records have fallen, 2019 hottest on record, and also hot at night. All those together mean when the fires go, they burn like nothing seen before.

Some reasons that I think that might be the cause:

Adding heat when air drying corn drastically shortens drying times. While the temperature range discussed in the article is lower than in Australia's current weather the general rule is surely applicable, and most likely to other plant parts as well.

Not only is the terminal humidity of the plant material lower in hotter air, it is also reached earlier, which may explain why the fires are so bad relatively early in the season. While in cooler years a plant may bridge dry spells between precipitation events it may not be able to do that at 45℃.1 And as others have noted, the hot air also dries soil and surface so that the plants find less water to replenish. Heat stress with insufficient water supply may have killed more plants than usual at this time of year, adding more dry fuel than usual.

1 I would think that this temperature is also generally not far from the absolute maximum temperature for all but the most specialized plants, as it is for animals, including humans.
Share
Improve this answer
answered Jan 6, 2020 at 1:11

Overall there isn't a simple answer to your question, prolonged periods of elevated temperature effect the chance of ignition, rate of fire spread, and what types of fuels become involved in the fire. These of course are also strongly effected by other factors like the moisture content of the fuel, and the strength of the wind. For instance if you have a heat wave and high wind, the fire danger is usually very severe.

The poster and several of the responses have correctly noted that elevated temperature dry the fuel more, however there is a dependence on time that is not addressed. The key thing here is that in general, the larger the piece of fuel, the harder it is to evaporate the moisture contained in it. So a prolonged heat wave would allow for larger fuels, wetter fuels, or fuels out of direct sunlight, such as dead trees, timber elements in buildings, piles of leaf litter, and living/green vegetation to become bone try as well, increasing the intensity of the fire, and allowing them to spread faster. For this reason, wildland fuels are often characterized as 1 hr, 10 hr, 100 hr, and 1000 hr fuels based on the characteristic time it would take for them to dry. If say you had a fire after a prolonged heat wave (longer than 1000 hrs), both larger and smaller fuels would be involved while if the heat wave had only been for ~10 hours, less of the fuels would be involved, reducing the intensity of the fire.

Higher temperatures also make ignition more likely. Consider a carelessly discarded cigarette igniting a pile of leaves. Before the leaves are ignited, they heated, and some of that heat is being lost to the environment based on the temperature difference between the leaf and the environment. If the heat losses are too great, ignition will not occur, but if the heat losses are too small, ignition will occur.

You are correct, it is not the heatwave itself, but its cause, drought.

There are mainly three causes of the fires:

It is not the heatwave itself, but the heatwave, when it lasts, like in your case, brings drought. Fire needs fuels, and we call fuels, in the case of brushfires, the small sticks, trees, and undersbrush receive radiant heat from the Sun, and if the heatwave lasts, the drought will bring these fuels to a level where they can ignite faster.

A lasting heatwave usually means no rain, so drought.

So basically the heatwave itself just helps with the ignition, but the fuels need to be as you say bone dry (because of drought) to get ignited.

Once the fuels get ignited, it is the wind that makes the fire get oxygen.

Not the answer you're looking for? Browse other questions tagged thermodynamics temperature climate-science combustion heat-conduction or ask your own question.

0
Computing delta temperature based on radiation and heat loss
3
Where does all the heat go during winter?
1
Is the randomized motion of particles produce heat?
0
What is heat and heat transfer?
0
A heat flow generalized problem featuring light bulb and oven
0
Heat and temperature
0
Definition of the rate of heat flow
5
A question about thermal conductivity and heat transfer
9
Inverting the heat equation