The following image is from Concepts of Physics by Dr. H.C.Verma, from the chapter "Speed of Light", page 447, topic "Michelson Method": 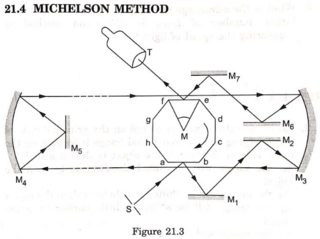 The following text is from the "Science Hero" article - Michelson’s Method for Determining Velocity of Light, under the topic "Disadvantages of Michelson’s method":

I can understand that when the number of faces in the rotating mirror is increased, the clear image of the source could be seen at lower angular speeds since the angle by which the mirror needs to rotate for the next face to take the position of the adjacent face is decreased.

where $D$ is the distance travelled by the light between reflections from the polygonal mirror, $\omega$ is the minimum possible angular speed of rotation of the mirror when the image becomes steady and $N$ is the number of faces in the polygonal mirror.

As $c$ is a constant, the product $\omega N$ is also constant. So, it can be seen that when we increase the number of faces the rotating mirror, the clear image could be obtained at lesser angular speeds. Now as $N$ gradually approaches infinity, i.e., the polygonal mirror becomes a cylindrical mirror, the angular speed $\omega$ tends to zero. So I think there must be a highest possible value for $N$ which gives the most benefit. What is its value, and what is the reason for this choice? Are there any other advantages of using a larger number of faces in the rotating mirror besides the one discussed in the question?

Related question asked by me: Number of reflecting surfaces in the rotating mirror in the Michelson method of determination of speed of light

I think Michelson method of determining the speed of light is different from the Michelson Morley experiment. So, I had to use the query michelson speed of light -morley as my initial results were populated with the second experiment which has a similar name.

This method of determination of speed of light is briefly discussed here and here.

The purpose of having a relatively large number N of mirrors on the polygon is to increase the switching rate for a given rotational speed. This allows the distance to the retroreflecting mirror to be short enough to be practical. An important factor is that the beam size needs to be large enough to ensure that a significant fraction of the beam will reach the distant retroreflector. As you probably know, a light beam spreads faster when its waist diameter is small. This means the mirrors need to be relatively large, depending on how far away the retroreflector is. In turn, this means that N must be relatively small for a fixed-size wheel.

Not the answer you're looking for? Browse other questions tagged optics speed-of-light reflection geometric-optics or ask your own question.