How Does a Moderately Hot Gas Emit Radiation?

I have been studying black-body radiation and have a rudimentary understanding of how this works for solids (like a heated iron bar).

I am having trouble grasping how a "warm" gas emits a quanta of radiation.

Quoting from the Wikipedia entry, "All normal (baryonic) matter emits electromagnetic radiation when it has a temperature above absolute zero. The radiation represents a conversion of a body's internal energy into electromagnetic energy, and is therefore called thermal radiation. It is a spontaneous process of radiative distribution of entropy."

Almost all of my google queries returned discussions of greenhouse gases capturing and re-emitting IR photons due to their properties as asymmetric diatomic molecules.

That is not what I am asking. Thermal radiation from real gases (compared to an idealized black body) seems much more complicated to me due to the space between the molecules (compared to solids or liquids). It seems further complicated - for the simpler molecules that cannot vibrate like an asymmetrical diatomic molecule.

I would probably comprehend the answer better using a physical model. Consider one mole of H2 in a globe in space beyond our reach. The gas has a temperature of 200K and a pressure of 10 atm. The material of the globe is perfectly transparent to all radiation. The surrounding space is barren, at a temperature of 0K and there is zero background radiation.

What is the mechanism for the kinetic energy of the gas molecules to be transferred to space via radiation? How fast (approximately) would the temperature drop from 200K to 100K? How fast would the temperature drop from 5K to nearly 0K as the average kinetic energy of the molecules became very low? Would any of the answers change significantly if the gas was changed to Ar?

Thank you to anyone who chooses to answer all (or even a portion) of my oddball question!

Molecular hydrogen can undergo pure rotational and vibrational-rotation transitions at temperatures of 100-1000 K in the mid-infrared (e.g. at 17 and 28 microns - see energy level diagram below, from Goldsmith et al. 2010) due to its non-zero quadrupole moment. In thermal equilibrium, these rotational states will be populated accordingly. 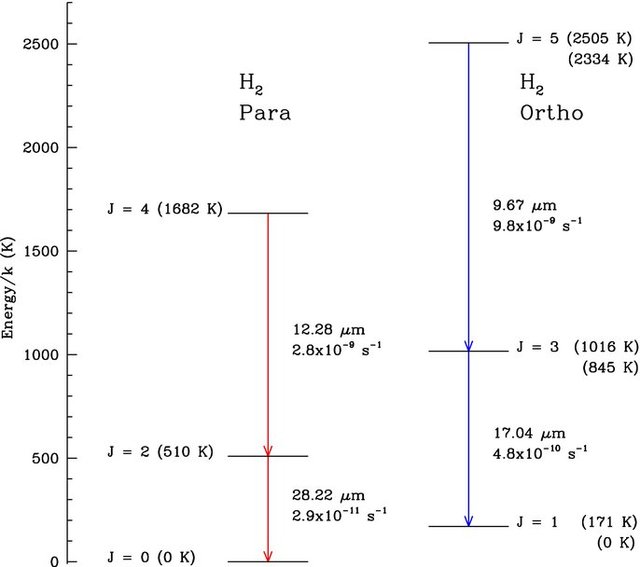 Quadrupole transitions are weak -- the Einstein A coefficients are small. In your scenario the gas would probably cool by collisions with the walls of your containing vessel. A better question would have been to confine the gas gravitationally. This is exactly what happens during star formation in the early universe. Inefficient radiative cooling by hydrogen molecules is how the gravitational potential energy of the first collapsing protostars is radiated away (e.g. Williams 2009).

The rest of your question requires all such transitions to be identified and quantified. Your 1 mole of gas will certainly be "optically thin" to radiation, even at these transition wavelengths, so in principle, the radiative losses can be found if you know all the Einstein A coefficients and the populations of all the levels at a particular temperature.

This would only get you down to temperature of $\sim 100$ K. Below this, there are essentially no hydrogen molecules in the excited states and therefore no cooling via these transitions is possible. There are microwave transitions that are theoretically possible between ortho- and para- isomers, but the reciprocal Einstein coefficients for these transitions are longer than the age of the universe.

You also ask about Argon, but that is a completely different situation. Atomic argon gas has a rich infrared spectrum, that has been studied in the lab for some time (e.g. Humphreys & Kotkowski 1952), but the upper levels of these transitions aren't going to be excited by collisions at 200 K. I expect therefore that an Argon gas just couldn't cool radiatively.

Absorption is negligible in the visible and in the IR for argon and for homonuclear diatomics like H$_2$, N$_2$, and O$_2$. So according to Kirchhoff's radiation law, emissivity is negligible too. These gases do not cool by radiating.

Your gas will quickly get the temperature of the pressure vessel globe because of collisions. Then that globe was completely transparent to all radiation, so it does not radiate either. It will remain at its temperature for a very long time.

In reality, such solids do not exist. Glass will absorb and radiate at thermal wavelengths like a black body.

My answer has 2 parts.

First, why do gasses emit at specific colors when heated:

The formula for black body radiation has a "hidden" assumption: The body is black, meaning it absorbs all wavelengths equally (that is actually a gray body, black also means it absorbs 100%).

This approximation is valid for a lot of solids (not all of them, for example glass) but not for gas. When a body absorbs differently different wavelengths the emitted power in these wavelengths won't obey the ratio dictated by Plank's formula. Instead, each color will have a coefficient called the emissivity which will determine how much will be emitted due to the temperature of the body being above $0^\circ$. This coefficient is deeply related to the absorption, meaning "simple atoms/molecules" (like a lot of gasses) which have characteristic absorption lines, will also emit more in these wavelengths. This gives Sodium lamps (street lamps) their yellow color, Helium lamps a different color, and so on.

Now to the second part of the answer, what is the mechanism.

This question has the same answer to the question "why does anything at all emit radiation when is above $0^\circ$?". What is black body radiation?

In thermodynamics, one can see that when in thermal equilibrium, all of the energy states accessible to the system will be excited with a certain probability (or for a macroscopic system, some part of the system is in these states). The mechanism of reaching thermal equilibrium is all of the above answers that were given before me (collisions, radiation, etc..). Meaning some atoms or molecules are in electronically excited states, and all of the time some atoms go down and some go up. But the key here is that when they go down, they sometimes emit radiation. If that radiation will get out of the system and reach our eyes, we'll see that the black body is glowing (and the system will thus lose a bit of energy). The hotter you get, the more probable your system will get to the upper energy levels, meaning they will emit higher frequencies. This is the origin of black body radiation. As you can see, the frequencies emitted are deeply connected to the energy levels, which is related to what color you absorb. So if you absorb everything you will emit everything, but if you absorb some things better than others, it means you are more probable to get to these states and emit the radiation back.

A: (Short; Collision induced photon emission.) The emission and Absorbtion happens only through certain frequencies, which are known as a emission spectrum. This means that only the collisions of the particles which have the correct kinetic energy are causing this emission, and further only the radiation with a correct frequency can be absorbed. This is easy to observe in the color of bunsen burner.

This doesn't mean that gas can't cool normally. The temperature of a kinetic gas is practically it's particle velocity. Complex molecules can have various degrees of freedom, and it's only this which actually defines the heat capacity.

A: Depends on boundary connections. Note that temperature (=velocity) depends also from volume.

Q: Would any of the answers change significantly if the gas was changed to Ar? A: No.

Not the answer you're looking for? Browse other questions tagged thermal-radiation infrared-radiation or ask your own question.

0
How many atoms need to be present to form a molecule?