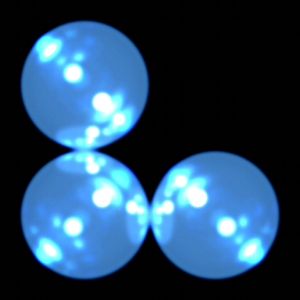 First of all, it doesn't make sense to assign an absolute number to a physical quantity like length and volume. The number can be different with respect to different "units" of measurement.

But one can still question the ratio of two lengths, in this case:

According to the Bekenstein entropy limit(information), I guess there should be some maximum level of precision.

If a rod has an irrational length ratio, then it demands an infinite amount of information(write the length in a binary format like this sequence 11010100001000....).

Since irrational numbers don't have any pattern( repetition of a finite sequence) I guess it should be impossible to retain all that information in a Quantum Mechanical world.

Moreover one can be even more critical and accept the existence of length ratios only with a finite code(rather than a finite repetitive pattern)! so that one can deny even a rod with a non-integer rational number length ratio.

This sounds like the emergence of integers(quantas) in Quantum Mechanics!

It's expected from general results in Loop Quantum Gravity, a leading contender for Quantum Gravity, that there is a minimal length that is resolvable which is of the order of Planck's length.

It turns out that the continuum structure of physical geometry is quite a bit more interesting than the real line ...

2
How do we deal with irrationals in Physics?
0
If I cut a string, will its length be rational or irrational?
0
What is the relation between infinitesimal numbers that infinitely extend and space itself as a concept?
0
Can a force that has magnitude of an irrational number be exerted?
12
Is speed of light and sound rational or irrational in nature?
11
Are there any quantities in the physical world that are inherently rational/algebraic?
7
Why is physical space equivalent to $\mathbb{R}^3$?
4
Is there any phenomenon in physics which is sensitive to irrational numbers?
1
Is the fine structure constant a rational number?
1
Justifying the use of real numbers for measuring length
See more linked questions

1
Justifying the use of real numbers for measuring length
3
Is there a low-bugdet method to measure micronewtons?
1
Assigning distributions to the result of measurements
4
How do you physically measure voltage and current?
3
How is the Length of a Meter Physically Measured?
1
Is the "space of physical quantities" a field of transcendence degree $6$ or $7$ over the rationals / real numbers?