How can a salt solution conduct electrical current?

How does a sodium chloride solution conduct electricity?

The sodium and chloride ions actually separate in water, turning solid NaCl into Na+ and Cl- ions that can move freely through the solution. Electrons are one form of charge carriers and the most common, being that they have a net negative charge and are mobile inside of metals but free ions moving around in a solution also constitutes a current.

EDIT in response to comment: When you put two metal poles into a solution (a negative anode and a positive cathode) and turn on a battery, you are making a voltage difference between the two rods. As you may know from circuits, voltage differences are what drive currents but how this is done is what separates electrons conducting current through a wire and the ionic salt water solution. I will separate this process into numbered steps, since I got very tangled up when I was trying to think of all the mechanisms at once.

Step 1. The battery is turned on and creates a voltage difference across the electrodes. Nothing is conducting at this point and no current is flowing.

This is a tricky part that I would appreciate an answer to if someone more knowledgeable is reading this but I believe this is correct.

Step 2. This voltage difference (and possible excess charge accumulation) sets up an electric field in the solution. This attracts the positive Na+ ions to the negative anode, as the positive cathode attracts the negative Cl- ions. Below is a picture I found in a PDF titled 'Electrical Conduction in Solutions' that illustrates this nicely. 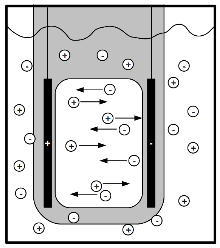 This is where the picture gets complicated. Simple attraction of ions is not enough to sustain a current through a solution; if nothing else were occurring in the solution besides the Na+ going to the anode and Cl- to the cathode, then once all the ions reach their respective electrodes nothing else in the solution would move.

So there is something fishy going on in the 'simple' salt water battery. Naive chemistry tells us this is the reaction that occurs when salt is dissolved in water:

A hint on what is happening comes from the unexpected sector of chlorine production. Most of the chlorine used in the world is made using the following industrial process of purifying salt water:

You may have noticed this yourself when one actually sets up a salt water battery: gas bubbles accumulate on both electrodes and nothing precipitates out.

Step 3. You may know that electrolysis is the process by which a current is used to drive an otherwise non-spontaneous chemical reaction. The non-spontaneous reactions that the battery drives are so-called 'redox' reactions, where chemical species lose or gain electrons.

In this case, the negative accumulation of electrons at the anode provides the excess electrons needed to decomposes H20 into OH- and H+:

These hydroxide ions are continuously made near the anode and the hydrogen gas bubbles out, so two of three species from the brine equation are accounted for.

Step 4a. Around the anode, we now have a concentration of negative ions (OH-) by a negative electrode. These negative ions are subject to the electric field in the solution and are repelled away from the anode and attracted to the cathode, causing OH- to migrate the cathode.

In pure water, this would be the complete picture. Water would pick up an electron at the anode, decompose into hydroxide, which would migrate to the cathode, pick up an electron and turn back into H20 and electrons would be ferried across the solution.However, the reason that pure water alone is a poor conductor is that the diffusion of OH- across the electrode gap is very slow and makes for weak conduction. This is why we need to add a source of ions, such as NaCl, to get good conduction.

Step 4b. When NaCl is added to water, it is the Cl- ions are the ones that actually reach the cathode and react to deposit their electrons:

This accounts for the final species we were missing and also completed the cycle. H20 picks up electrons at the anode and the OH- atoms carry it to the cathode. At the same time, the Cl- ions that dissociated in the water move towards the cathode and deposit electrons to become a gas. Thus the net movement of electrons from anode to cathode is complete and a current can flow.

I hope this is reasonably clean and clear after my edit. Also, I am a physics student, not a chemistry student so I welcome anyone pointing out errors or missing subtleties in my explanation.

You know that salts (an acid-base product, unlike metals) dissociate into ions when dissolved in solution. Isn't it? Well, we've got the well-known Arrhenius theory for that. Lets take your example: $\text {NaCl}$. Aqueous solution of this salt gives $\text {Na}^+$ and $\text {Cl}^-$ in solutions.

When you apply an external electric field (Electrolysis), we obtain current. Current is just an effect of the collision of charge carriers (assume they're electrons in case of metals, and ions in case of solutions). The applied electric field exerts a force on the charges, causing them to move towards the attracting poles (the electrodes). The ions suffer more or less the same drift velocity $v_d$ in the solution as that of the electrons in the metal. This is observed as current.

This case is slightly similar to that of a semiconductor (free electrons & holes are the charge-carriers). The direction of current is the same for cations, and opposite in the case of anions.

Of course, the metals won't accept ions to pass through them. But, the ions transfer their charges (they're just charge carriers and so, they can do such things) with the help of electrons. Say, $\text {Na}^+$ takes an electron from the cathode and this electron is transferred to the nearby $\text {Na}^+$ ions. In this way, a net current is observed. And for $\text {Cl}^-$, its the other way round (in the opposite direction).

Not the answer you're looking for? Browse other questions tagged electricity physical-chemistry ions or ask your own question.

5
Salt water conduction
4
Addition of a neutral electrolyte to water— how can it increase conductivity?
1
How does the viscosity of a non Newtonian fluid (ooblek) affect its resistance to electricity?
0
How does the ion mobility influence the elctrical fiels?
1
Does saline water lose conductivity over time?
1
Can metal or carbon vapour conduct electricity?