The following problem is from Concepts of Physics by Dr. H.C.Verma, from the chapter "Capacitors", page 166, question 12:

Two conducting spheres of radii $R_1$ and $R_2$ are kept widely separated from each other. What are their individual capacitances? If the spheres are connected by a metal wire, what will be the capacitance of the combination? Think in terms of series-parallel connections.

You may skip this section. I've included this in my question to show my efforts in solving this problem. Doubts related to this section are mentioned in the next section.

Earlier, from the same textbook, I learnt about "Spherical Capacitors" and their capacitance which is given by the following formula:

$$C=\frac{4\pi \epsilon_0R_iR_o}{R_o-R_i}$$ where $R_i$ and $R_o$ are the radius of the inner and outer metallic spherical shells. For an isolated sphere of radius $R_i$, the capacitance was determined by taking the limit $R_o\to\infty$ which is as follows:

This is how I solved the first part of the problem which asks for the individual capacitances of the two metallic spheres as $4\pi \epsilon_0R_1$ and $4\pi \epsilon_0R_2$. (The answer as per the textbook is correct)

The second part of the question gave some confusion. But the hint "Think in terms of series-parallel connections" made be think whether the combination is in series or in parallel. When the two metallic spheres are connected by a metallic wire, their potentials become the same. Further, the potentials of the respective bigger spheres (of infinitely big radii) are also zero.$^1$ Thus potential difference is same between the two shells (outer and inner) of the two isolated spherical capacitors, which implies they are in parallel.

This is how I determined the effective capacitance of the combination as $4\pi \epsilon_0(R_1+R_2)$ which is nothing but the sum of the individual capacitances. (Again the answer as per the textbook is correct)

1 : Initially, I had trouble in understanding this fact, which is discussed and clarified in my another question - How is the electric potential at infinity zero in the "Isolated sphere" case of a spherical capacitor?

I hope my question is on-topic homework type question. I've read some meta posts regarding the homework policy on this site. If you feel that this question must be closed, kindly state the reasons in the comments so that I could prevent such circumstances in the future.

What is the significance of the huge separation distance between the two spheres as stated by "...are kept widely separated from each other."? Why can't they be comparatively close to each other? What happens when we assume they are not separated by large distance? 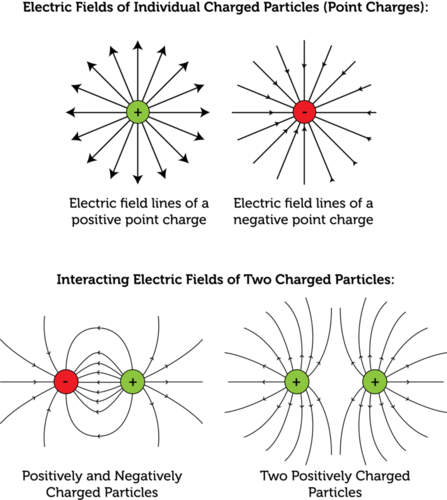 "Widely separated" means you don't have to consider how the electric fields of your two spheres interact together, so the approximation of considering only one sphere is valid. This has spherical symmetry and you can use simple math of spherical capacitors (top of illustration).

If they were close to each other, then their fields would interact (lower part of illustration) and the problem would no longer have spherical symmetry since there would be two spheres to consider instead of one. The "one sphere approximation" would no longer be valid. Also, the spheres would have capacitance between each other, acting like two plates of a capacitor, and the calculation would be quite different.

how does the assumption - the larger spheres of the capacitors which have infinitely large radii of same potential?

"Capacitance is the ratio of the change in an electric charge in a system to the corresponding change in its electric potential." (from Wikipedia)

Whether you use derivatives or deltas, the initial potential of any of your conductors do not matter.

All that matters is how much the potential of your two spheres will change when some charge is pumped into them.

Not the answer you're looking for? Browse other questions tagged homework-and-exercises electrostatics charge capacitance or ask your own question.

1
How is the electric potential at infinity zero in the “Isolated sphere” case of a spherical capacitor?

2
How is capacitance defined for three concentric spheres?
9
When two spheres of equal charge make contact, why does the larger sphere gain more charge?
0
Why does the sphere with the smaller radius (r1) have the greater charge density?
0
What is the distribution of charge on two conducting spheres?
0
Is potential difference or potential used in defining capacitance?
1
How is the electric potential at infinity zero in the “Isolated sphere” case of a spherical capacitor?
1
Is the capacitance of all types of capacitors increased by a factor of dielectric constant like parallel plate capacitors?