Ask Question
Asked 5 months ago
Active 5 months ago
Viewed 57 times
-1
$\begingroup$
Closed. This question is off-topic. It is not currently accepting answers. 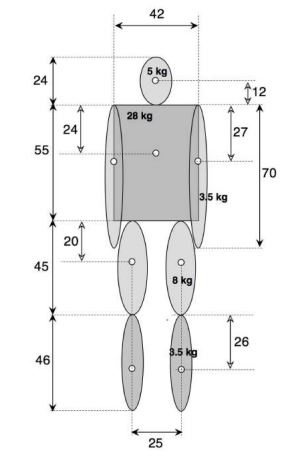 In the figure below is a very simplified model the mass distribution of the human body shown, with head (mass 5 kg), Torso (28 kg), arms (3.5 kg each), thigh (8 kg each), and lower leg incl. Feet (3.5 kg each). The lengths are given in cm, the circles (o) mark the Focal points of the individual limbs.

a) What is the center of mass/ gravity of the body?

Because the body is symmetrical on the y-axis I can deduce that x= 0cm (in the middle) But for y I can't get the correct answer.

I'm hoping this won't be the best answer, but it gives (what I think is) a nice intuitive walkthrough.

First, you're right that symmetry means the centre of gravity will be at x=0, with the y axis down the middle of the figure. The next question is where the x axis (y=0) would be. It looks like the assumption is it's at the base of the figure (because the maths works out that way). It could be any other location as long as you're consistent and define where it is - two obvious choices would be the top or bottom of the figure.

With y=0 at the bottom of the figure we have :

I liked the "torque" tag, so I'm going to consider this as moments with a fulcrum at the base of the figure. We're looking at where we would put a single point mass equal to the sum of the individual point masses in order to balance the turning effect of the figure.

Multiplying the individual point masses by their distance gives a turning effect of 6315 kg.cm. (which I know are not standard units).

Adding the point masses gives a total mass of 63kg.

(I'd started writing this before you showed the calculation you'd done - it looks like it doesn't have a consistent x axis location where y=0. The trick is a bit of addition and subtraction of dimensions so the measurement for each point mass is from the same reference. The formula was right in principle, but it fell over in application. And, to be fair, it looks like the original problem didn't define y=0.)

Not the answer you're looking for? Browse other questions tagged homework-and-exercises newtonian-mechanics statics or ask your own question.

4
Why is the mechanical advantage of a wedge = length of slope/ width?
17
Does holding weights allow you to run faster?
3
mathematical model of a system of rigid bodies
1
First derivative of the moment of inertia in time as a physical parameter