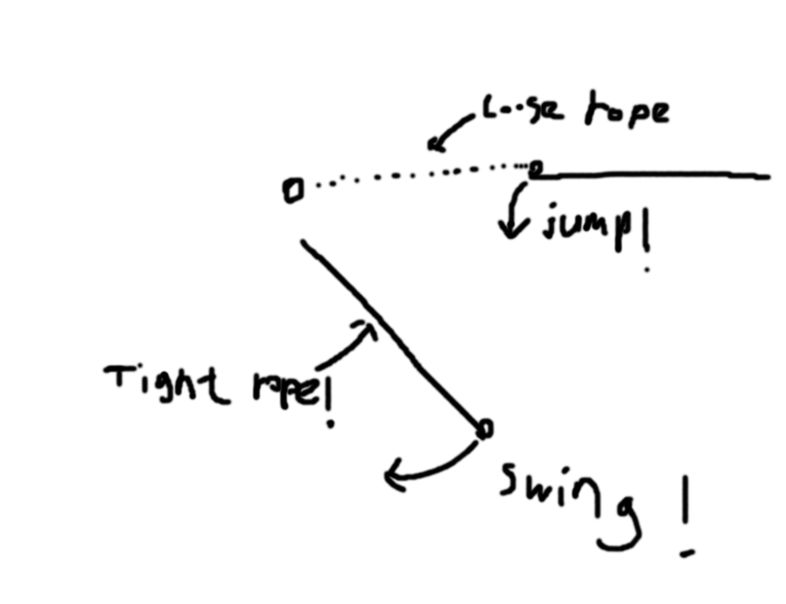 So I want to make a game with grappling hook but sadly I don't know physics. The question is

To answer your first question, yes. Circular motion always has the force component perpendicular to the velocity. The role of the centripetal force is to change the direction of the body at every instant.

Now, when the string becomes taught, the behavior is just like a pendulum and energy is conserved. Hence you can find the velocity at any height by equating the energy to the initial potential energy.

Be careful that for a UNIFORM circular motion the acceleration/force is radial (and directed from the edge of the circle towards its center). However, if the norm of the velocity is not constant, you will also have an orthoradial acceleration (parallel to the velocity).

Regarding your problem, there are several ways to tackle it. If you assume an inextensible rope, you would indeed start by a phase of freefall (for instance with a purely vertical velocity), and when the rope becomes fully extended, or "tight", it stays extended so the movement becomes circular (but not uniform!), described by pendulum equations (https://en.m.wikipedia.org/wiki/Pendulum_(mathematics) ). It is probably the easiest solution to implement numerically, however it is not really physical as you would need an infinite force at the moment you "switch" from freefall to pendulum, which would be very dangerous in real life.

Another option is to allow for the rope to deform slightly when a force is applied. One way to do so is to consider the rope as a perfect spring, for which the force exerted on the mass at the extremity is proportional to the deformation ($F = - k x$). This leads to the so-called elastic pendulum equations ( https://en.m.wikipedia.org/wiki/Elastic_pendulum ), which are two sets of coupled equations on the length of the rope $x$ and the angle with respect to vertical $\theta$, which write:

The advantage here is that you don't need to "switch" from free fall to a pendulum equation. However, this is also unrealistic as a bungee rope is not a spring. In particular, if $x < 0$, the rope would probably be loose and not exert any force on the mass. This can be done by modifying the previous equations when $x < 0$ to the equations of free fall. I do not know what it would look like, and probably it will still be a bit weird, as it would cause the mass to "oscillate" around a circular trajectory, and periodically switch from freefall to elastic pendulum. Maybe the most realistic way would be to add some damping to the rope motion so that it rapidly returns to its equilibrium position $l_0$. This is quickly getting more intricated ^^.

You could also just use the first solution, with a switch from freefall to inextensible pendulum, and try (or not, depending on your level of details), to "patch" the transition artificially to make it look smoother.

Not the answer you're looking for? Browse other questions tagged newtonian-mechanics forces centripetal-force or ask your own question.

1
Uniform circular motion on an unbanked road
4
In which direction does the friction act in a circular motion?
0
Circular Motion And How Liner Speed Affects It
1
Intuitive explanation to why force perpendicular to velocity results in circular path
1
Is Centripetal Velocity a Thing?
0
Some concepts of circular motion between man and the Earth？
0
Why Uniform Circular motion works?