How do physicists know when it is appropriate to use $\mathrm dx$ as if it is a number? [duplicate]

I'm trying to teach myself calculus of variations when I came across a worked example about the shortest distance between two points in a plane. This is a question about the mathematics but I don't think it belongs in Mathematics stack exchange because it's about techniques utilized by physicists.

The worked example starts off by defining a distance function like this:

So here $\mathrm ds, \mathrm dx,$ and $\mathrm dy$ are being treated as if they are real (as in actual) numbers that have some real value when they are, in the best case, infinitesimals. The way I understand them is that they either define an operation on a function, such as $\frac{d}{\mathrm dx}$, or the derivative of a function that's been acted on by the differential operator, eg. $\frac{\mathrm dy}{\mathrm dx}$. They're just notation for operations.

$\frac{\mathrm dy}{\mathrm dx}$ is not a ratio of two numbers. They're not numbers as far as I can understand, they represent operations.

The worked example then pulls out a $\mathrm dx$ from under the square root, as if it is a number, to get this

Then it does this

it's gone back to treating $\mathrm dx$ and $\frac{\mathrm dy}{\mathrm dx}$ as operators or functions resulting from operations respectively.

My question is, how do you justify when to switch between treating it as a number and an operation? I find this very strange but I see it often in physics literature. Are there circumstances where this doesn't work? Please direct me to any source where I can learn more about this.

You are a victim of a quite frequent way of teaching calculus which continues to show embarrassment with the differentials, even if nowadays we have all the conceptual tools to deal with them in a safe way.

Forget about operators (which are not the natural way of looking at things in the present context) and infinitesimals (which mean too many things, some of them obsolete and inconsistent).

Let me try to show a consistent way of thinking and using differentials.

You see that this way of dealing with differentials is fully consistent, differentials are real valued functions, and no strange infinitesimal quantity is around.

Generalization to differentials of more than one variable or to vector valued functions is of course possible and it is a trivial generalization of the previous treatment. For example, the length of line element of a curve, $ds$, you wrote in you question can be written as $$ ds = \sqrt{dx^2+dy^2}=\sqrt{x^{\prime 2}+y^{\prime 2}} d\tau $$ if $\left(x(\tau),y(\tau)\right)$ is a parametrization of the curve. Each quantity appearing with a $d$ here is a differential, and at the and of the day, a real number.

I agree that, even if everything above is nothing but math, it is the community of physicists which seems to be more uneasy with the manipulations of differentials.

how do you justify when to switch between treating it as a number and an operation?

Even if these two things can be thought of as the same thing, this really is more of an opinion. Whatever is the easiest for you to think about, go with that. The math itself doesn't really care about how we think about it (as long as our thoughts are still mathematically valid).

Another approach: the operator is “d”, and there’s only one of them. The “d” operator does “take a so-small-as-to-ensure-linearity sample”.

Since there’s only one of these, the d in dx and the d in dt work consistently to give you a valid dx/dt for velocity, dy/dx for slope, etc.

The dx really can be treated as just a number once you’ve specified a particular point for evaluation. You don’t know what that number is, the operator has made an arbitrary choice, but it still has all the properties of a number.

One way I like to think about such derivation is first to approximate the length element as in the picture below: 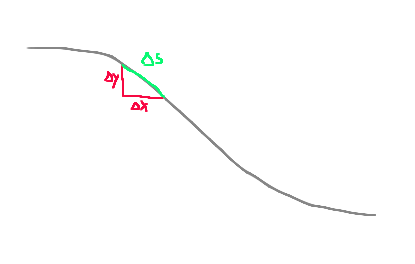 Not the answer you're looking for? Browse other questions tagged classical-mechanics variational-principle calculus variational-calculus or ask your own question.

53
Rigorous underpinnings of infinitesimals in physics
0
Confusing with the equation $(2.4)$ and $(2.5)$ of Landau and Lifshitz, Mechanics, Chapter 1, The principle of Least Action
0
Derivation of Euler-Lagrange Equations
4
Approaching physics using ordinary analysis rather than nonstandard analysis
0
Why do I get different results in the draining tank problem?