Details about mechanics of directly-downwind-faster-than-wind vehicle

(I have read the other question related to this topics here on physics.stackexchange, but the answer there is too general and I want to address some details about the vehicle and the validity of the test run so I ask a new one)

I have recently come across a land vehicle called Blackbird, the inventor of which claims that it can run directly downwind faster than wind. It is sponsored by Google and there were some tests which showed that the vehicle can run up to 2.8 times the windspeed.

I find it really interesting so I did some search about the topic on the internet. After reading several articles and forum threads related to the topic, I am still confused about how it exactly works.

To begin with, the explanation of the team that built the vehicle can be summed up as follows: wind pushes the frame of the car, which makes the wheels roll, the wheels then rotate the propeller, the propeller extract wind power to produce thrust that drives the car forward. How can a propeller do such thing? How can it use power out of the wind to create thrust in a direction opposite to the wind (when it has already exceeded wind speed)?

Secondly, I have also looked at some formulas that are claimed to be the description of how the vehicle works. One formula (from a professor named Mark Drela, link at the end) shows zero propeller power when the vehicle speed equals wind speed, so apparently the vehicle could not exceed wind speed, but it could still accelerates given it is already at a speed greater than wind speed. How could it reach 2.8 times the wind speed from zero velocity in the test?

This confusion also led me to doubt the actual test itself, so I searched further and found a thread on international skeptics forum, in which there are some who critized the way the data was measured and processed. In particular, the measurement data was processed by the inventors, not by a third party, which raises doubts about transparency, the placement of measurement instrument and data processing after the test could also hide gust and change in wind direction (making it not directly downwind). Why couldn't they just test in a wind tunnel?

Could someone explain whether this works. If so, what is wrong in my understanding of the way it works?

Yes this does work, but the blades work opposite of, say a windmill which is turned by the wind. Initially the wind blows on the blades, which act more like a sail, to begin pushing the craft forward. This causes the wheels to rotate, the wheels are connected to the blades to turn them to push air back against the wind. this creates a higher pressure on the blades than a flat sail would get as it approached wind speed. This higher pressure can push it past the wind speed.

The blackbird, initially imagined by aerospace engineer Rick Cavallaro, was co-developed by the aeronautics departments of an university, the San Jose state university, and supervised and recognized by the North American Land Sailing Association (NALSA). Furthermore the calculations of MIT professor Dr. Mark Drela (as well as of a research group of the Technical University of Denmark) showed already in 2009 in quite a straight-forward manner for both water and land vehicles in a downwind configuration how this is possible even before the actual full-size vehicle was test driven for the first time in 2010. Additionally there have been similar efforts previously (see Aeolus Racing and Greenbird). An exhaustive article on the topic by Wired can be found here and a good video report by Discovery Channel here.

There are two different configurations for each water and land vehicles depending on the rotor design of the rotor ("propeller"): Up- and downwind. In the upwind configuration the vehicle harvests the energy like a wind turbine and transfers it to the wheels. In the downwind configuration on the other hand the flow and the vehicle move into the same direction. The former is rather intuitive (basically a wind turbine on wheels) while the latter might seem unphysical at first.

In the end it boils down to the fact that the power generator experiences a different velocity than the power consumer and that the wheels and the rotor are coupled to some sort of feedback loop. Disk actuator theory (as a model for the propeller) can be used to estimate the efficiencies for the propeller and then the resulting equation is put into a dimensionless form (something common in fluid mechanics as it makes the results somewhat independent of the problem size). The resulting force (from thrust and drag) must compensate the resistance forces (roll and air resistance). The curves given at the end of the linked document describe the ratio of terminal velocity (steady-state) to wind speed depending on the dimensionless thrust coefficient. The results for water and land vehicles are different due to different efficiencies and resistance coefficients. As you can see the results for land vehicles with $\eta_{net} = 0.8$ are pretty similar to what was actually achieved in the test run.

According to the articles listed above several people have already designed working small-scale prototypes going faster than the wind but a large group of individuals still believed these to be hoaxes. Additionally as you can see from the curves in the document the whole experiment relies on the efficiencies: It is questionable how a model performs compared to full-size model. The reason why they did not test the full-size prototype it in a wind tunnel are its operating conditions: The thing seems to be approximately 6 m tall, is operating at only 16 km/h and needs the speed of the wheels to be synced to the wind speed. Finding an appropriate wind tunnel fulfilling the size requirements of an actual full-size prototype is already challenging (only leaving a hand full world-wide, most wind tunnels are intended for small-scale models) and I don't think there even exists a moving ground wind tunnel (such as used for Formula 1 cars) of that size. A real-world test on the other hand is quite straight-forward and offers real insight into achievable efficiencies.

I think you are misunderstanding formulas \eqref{1}-\eqref{3} given in the document:

Formula \eqref{3} states that the power generated by the turbine or wheels $P_t$ must be consumed by the propeller $P_p$ in steady-state. The shafts and gears are assumed to move with a constant rotational speed meaning there is no energy required to accelerate the entire drivetrain (which would require a certain moment of inertia) but it is not assumed completely loss-less, the efficiency $\eta_g$ takes into account mechanical losses due to friction. As a result the propeller is only supplied a fraction of the power of the power generated by water turbine/wheels.

For $V = W$ indeed the propeller consumes no power even though the turbine/wheels supply a certain amount $P_t > 0$. This means that this power will be used to accelerate the drive-train and the propeller which increases $F_p$ and as a consequence accelerates the vehicle to a higher velocity $V$ resulting in a larger relative velocity $V - W$. A steady-state operation at this point is not possible (for this particular setup and $P_t > 0$); this is why the curves in the document end before the vertical value $\frac{V}{W} = 1$. The entire concept is based on a feedback loop (coupling) between wheels and rotor as well as clever design.

In the end the whole setup indeed works but lacks real practical applications: You would have to change the setup depending on the wind direction. Nonetheless I think this is really an interesting concept from a theoretical view similar to the Flettner rotor working with the Magnus effect (check it out if you have never heard of it!). It sounds like magic at first but is only a clever use of physics!

If you want a simple intuitive way to understand it, try this.

You know how you can squeeze a wet watermelon seed and make it shoot out from between your fingers? It's based on wedge action.

Now let it be a sailboat with a centerboard, so the boat can only go in one direction. The sail is at an angle to the centerboard, and that angle forms a wedge, like this:

The boat is like the watermelon seed, and it's being squeezed between the centerboard and the wind. So that way, the boat can sail across the wind at virtually limitless speed.

Now let the direction of the boat turn downwind. Not completely downwind, but only 45 degrees or so. You can still get the same effect. 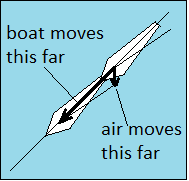 As you can see, it depends on there being a narrow angle between the sail and the centerboard of the boat.

In the car, instead of a sail on a mast you have a propeller blade on a stick, and instead of a centerboard you have wheels and gears that constrain the direction traveled by the blade. Since the "sail" is rotating, it is not going directly downwind, but at an angle like maybe 45 degrees off of downwind. You still get the squeezed watermelon-seed effect.

Your confusion is understandable. The gist: there is nothing special¹⁾ in the situation when the speed of the vehicle is exactly the same as the speed of the wind. Indeed, to accelerate, you need to “push against the wind”. However, pushing does not take any energy as far as you are not moving against what you push!

¹⁾ Well, there is something special: you can achieve arbitrarily large acceleration. (See below!)

With a big enough (well-designed) propeller, you can push-against-the-wind arbitrarily strongly with a tiny energy spent — as far as the wind velocity is close to 0. So take some energy from the wheels (e.g., attach a generator to the wheels); this would put some breaking force on your vehicle — but using the obtained energy, you can overpower an arbitrary strong breaking force — and accelerate your vehicle beyond the wind speed!

I explain in another answer how “the gear ratio” between the wheels and the propeller affects the speed one can achieve.

Not the answer you're looking for? Browse other questions tagged classical-mechanics aerodynamics or ask your own question.

23
How to sail downwind faster than the wind?
5
Calculate quadrotor propeller torque due to aerodynamic drag
1
how could more rotor speed mean less energy in wind turbine?
0
How much energy does a bird use gliding, vs how much energy is there to capture in the moving air?
1
Is a passive vehicle exceeding wind speed from rest possible with momentum conservation?
0
More confusion about the faster-than-wind Blackbird
0
How and where does air that is displaced by a constant moving vehicle flow?