Covariant and contravariant components of a vector in curvilinear coordinate system 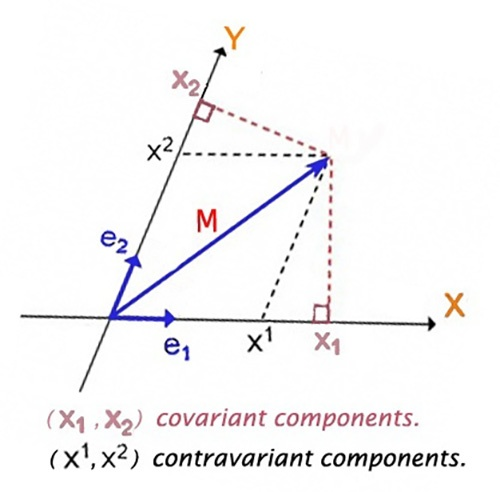 However, I'm not sure how this translates to curvilinear coordinate systems. What's the geometric interpretation of co and contravariant components of a vector in such a system, and how is it related to the algebraic definition? (Picture a scenario like the following) 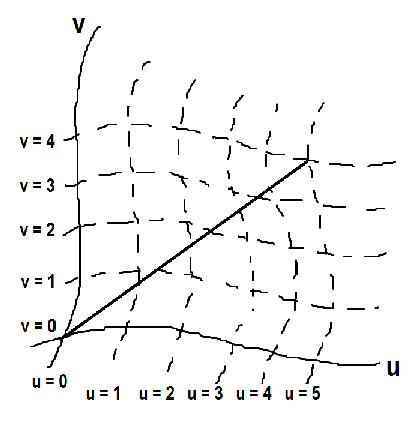 However, I'm not sure how this translates to curvilinear coordinate systems.

So, they work the same way as they do with linear coordinate system, but you have to consider each tangent space separately.

However there is a common "abuse of perspective" so to speak. If your manifold $M$ is equipped with a nondegenerate metric tensor $g:TM\times_M TM\rightarrow\mathbb R$, then, as OP is likely aware, the metric realizes a (strict) vector bundle isomorphism between the tangent bundle and the cotangent bundle (or algebraicly speaking, an inner product realizes an isomorphism between the vector space and its dual). Let us denote this isomorphism as $\sharp:T^\ast M\rightarrow TM$ ("raising") and its inverse as $\flat:TM\rightarrow T^\ast M$ ("lowering").

But then we can apply "raising" to the $\theta^a$ and obtain $e^a:=\sharp\theta^a$. These are now local vector fields (rather than 1-forms/covectors) on $M$ that satisfy (by the definition of the metric isomorphism) $g(e^a,e_b)=\delta^a_b$.

We can then say that if a vector or local vector field $v$ is given, we may express it as $v=v^a e_a=v_a e^a$ in either frame. As it can be easily seen, the "covariant components" $v_a$ have the exact same properties and form as the components of $\flat v$ (the "lowering" of $v$) in the dual frame.

Thus one may dispense with covectors and bigraded tensors altogether, and consider all tensors to be graded by degree/rank/order (number of indices) alone with the understanding that all indices can be taken with respect to either a frame or its reciprocal frame, and then everything will work precisely the same way as if one had considered bigraded tensors from the get-go, but one does not have to also learn about dual spaces and whatnot.

However this way of looking at things is "unnatural", and requires a fixed metric tensor.

Another thing that I don't understand: aren't covectors, and not vectors, the mathematical objects that have covariant components?

OP didn't mean this but I feel compelled to also say here that the "traditional" terminology of contravariant and covariant is completely backwards with respect to the modern category-theoretic point of view. If $M,N$ are smooth manifolds and $\phi:M\rightarrow N$ is a smooth map, then tangent vectors (which are the ones with contravariant components, traditionally) are transported along the map $\phi$ via the tangent functor $T:\mathsf{Diff}\rightarrow\mathsf{VecBun}$, which is a covariant functor, and covectors (which are the ones with covariant components, traditionally) are transported backwards along the map $\phi$ via the cotangent functor $T^\ast:\mathsf{Diff}\rightarrow\mathsf{VecBun}$, which is a contravariant functor.

Since when $\phi$ is a diffeomorphism, this is essentially the coordinate-free version of the change of coordinates formula, tangent vectors should be called covariant and 1-forms contravariant.

I think we need to define a reciprocal basis, besides the normal basis of vectors.

The basis vector is now a function of $P$. For the normal basis we take the gradient:

Now we can find the components of a small vector in the neighbourhood of $P$. First the contravariant ones, that are the dot product with the reciprocal basis (it is easy to prove that for straight coordinates it is equivalent to drawing parallel lines to the axis):

Not the answer you're looking for? Browse other questions tagged differential-geometry tensor-calculus vectors coordinate-systems covariance or ask your own question.