Say I have this disk with radius $R$, mass $M$ that could rotate with angular velocity $\omega_0$ around it's CoM freely (no friction, etc). Then we have a smaller disk with radius $r$, mass $m$ that could also rotate around it's CoM freely with angular velocity $\omega_1$ relative to the larger disk. We then placed the smaller disk on the edge of the larger disk, so that the distance between their CoMs is $x$ (which in this case, $x$ = $R$). Both disks are rotating in the clockwise direction. So I tried to draw the system and it looks like this. 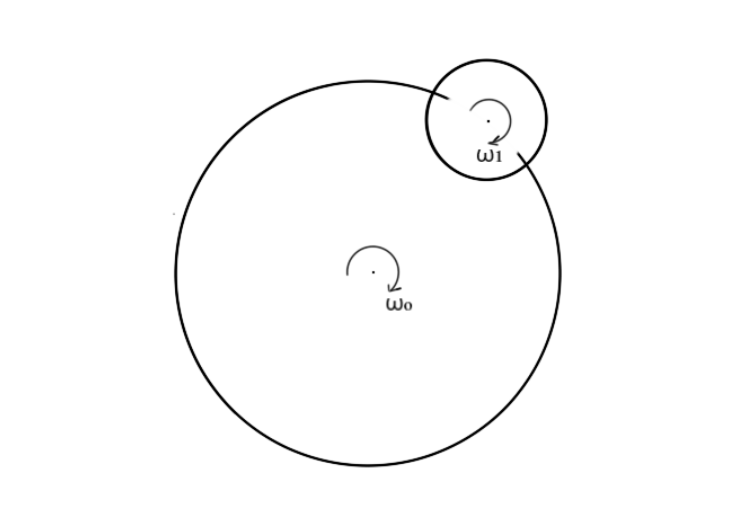 How do we calculate the angular velocity of the smaller disk relative to us (say we are observing the motion from above)?

I tried to look up the web to see similar topics that discuss about this particular system and couldn't really find one, so if you happen to know, please feel free to leave a link.

If the small disk did not rotate relative to the large disk then its rotation rate (angular velocity) relative to us would be the same as that of the large disk $\omega_0$. This answer does not depend on the distance $x$ between the centres of the two disks.

If the small disk rotates at rate $\omega_1$ relative to the large disk then its rotation rate relative to us is $\omega_0+\omega_1$. Again this does not depend on the distance $x$ between the centres of the disks.