In neutrino oscillation experiment, what are the Feynman diagrams involved for the *detection of the neutrino* in the detector?

In neutrino oscillation experiment, for example NOvA [but it could be other if you prefer], what are the diagrams involved for the detection of the neutrino in the detector ?

I have explored inside many PhD theses to understand a bit, but none are very clear, and the authors seem not really to master the physics of the interaction at the detector (they seem to just copy/paste the explanation on the previous theses, etc.), and none are exhaustive for the involved interactions.

My question is : for detecting the resulting oscillated neutrino at the far distance detector :

-which of these diagrams (maybe there are additive ones ?) correspond to the signal ?

-which correspond to the background ?

In particular, do elastic scattering contribute to the signal ? (authors of PhD theses most often skip the purely elastic diagrams, for unknown reason) 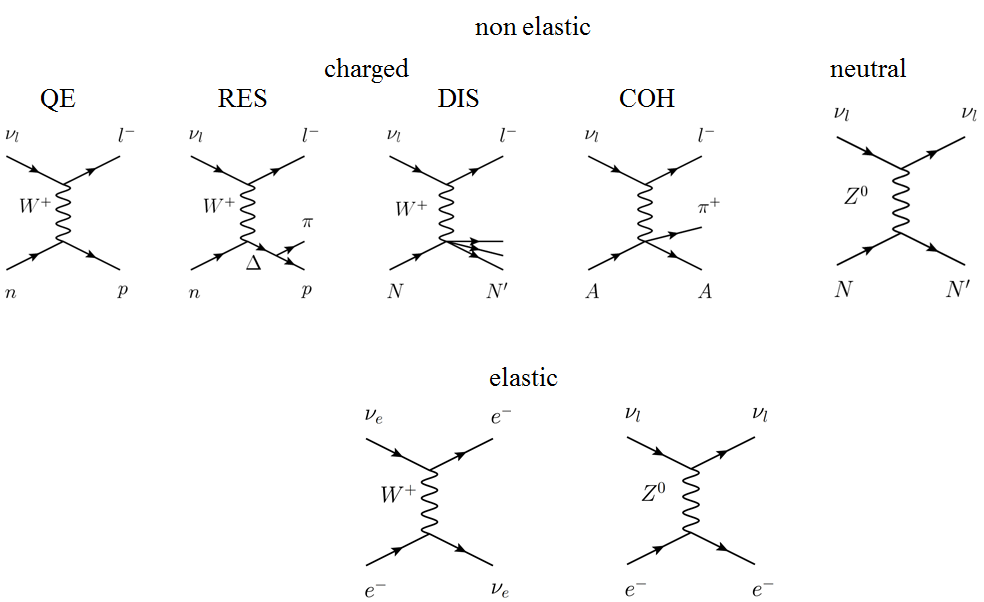 To start with, one has to keep in mind that detectors detect, by recording interactions in a medium. As neutrinos leave no track in the detectors, the final state neutrinos are useless for detecting. In principle, if the neutrino beam were mono-energetic, using conservation of energy and momentum one could fit for a missing neutrino, by just detecting the lower vertex outputs, $Δ^{++}$ or whatever it is, but neutrino masses are very small (only limits are known), so the energy balance even if possible would not give accurate enough four vectors to differentiate the masses

So what are the experiments for oscillations looking for:

They know the percentages of neutrino flavors in the beam, by construction of the beam

They go many kilometers away and measure the percentages of neutrino flavors, using detectors which are sensitive to electromagnetic scattering of the products of the neutrino interaction with the nuclei of the detector. The detector can record the momenta or energies of charged tracks, and thus identify an electron,a muon or a tau and from the numbers know the percentages of flavors that hit the detector. The difference between input and output flavor percentages show the oscillation.

-which of these diagrams (maybe there are additive ones ?) correspond to the signal ?

The signal is to see a lepton and determine its lepton number. This will identify that the incoming neutrino has a specific flavor, which is the objective of the experiment

which correspond to the background ?

the background will be the experimental misidentifications, no need for diagrams. One is not measureing a crossection.

In particular, do elastic scattering contribute to the signal ? (authors of PhD theses most often skip the purely elastic diagrams, for unknown reason)

As mentioned above neutrinos leave no track in detectors.

If the outgoing is a neutrino/antineutrino it cannot be seen in the detector.

Not the answer you're looking for? Browse other questions tagged particle-physics experimental-physics standard-model feynman-diagrams neutrinos or ask your own question.