How do holes move across a PN junction?

When learning about the formation of the depletion region when n-type and p-type semiconductors are brought together, I note that many resources state that whilst electrons diffuse from the n-type material to the p-type material, holes also diffuse in the other direction.

The Feynman Lectures section 14-4 says this:

, and Wikipedia says this:

This idea of holes and electrons both diffusing across the junction is also shown in this video, and is shown in the following image: 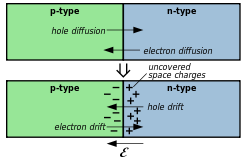 I am struggling to understand the idea of holes being able to move across the junction, however. My understanding is best shown by the HyperPhysics page on the PN junction, which says the following:

When a p-n junction is formed, some of the free electrons in the n-region diffuse across the junction and combine with holes to form negative ions. In so doing they leave behind positive ions at the donor impurity sites.

In my mind, the diffusion of electrons causes holes in the p-type region near the junction to be filled. Additionally, the departure of these electrons from the n-type region leaves a net positive charge behind - notably, however, despite this positive charge there should be no holes, as the donor atoms would retain a full outer shell. Thus, whilst this movement fills holes, it creates no holes in its place. This seems to put my interpretation (and seemingly HyperPhysics) at odds with the other mentioned resources.

I would like to look at the following quotes from the Feynman Lectures:

In a similar way, the positive carriers of the p-type material can diffuse across the junction into the n-type material

My initial interpretation of these materials had me considering that the description of "holes" was being applied to the n-type side despite each atom having a full outer shell, simply as a tool for describing the behaviour. This, however, seems incompatible with the following Wikipedia quote:

So, what is it? Is the diffusion of electrons causing a net positive charge on the n-type side of the depletion region, or are holes diffusing independently across, or somehow both? If holes are indeed diffusing across, how do they manage to get past the diffusing electrons without being filled?

I am struggling to understand the idea of holes being able to move across the junction, however.

Holes move in just the same way electrons do.

One minor difference is that because the curvature of the E-k curve for the valence band is different from the curvature for the conduction band, holes and electrons have different effective masses.

Other than that, they move the same way. If electrons can move across the junction, holes can do the same thing.

In comments you added,

As I understand it, the driving force behind electron diffusion is the repulsion of like charges. The holes are all in the valence band and so unlike electrons cannot move freely unaided, and thus I wouldn't expect them to naturally repel and move into the n-type region.

This is incorrect on a couple of points.

First, just like when uncharged molecules diffuse in a gas, the driving force behind diffusion is nothing more than that the particles are moving randomly, so if there are more of them at point A and fewer at a nearby point B, there will be a net flow of particles from A towards B.

To the extent that the mutual repulsion of the electrons causes a current, we would call that part of the drift current, not part of the diffusion current. (Also remember that, for example, in the n-region there are vast numbers of electrons and they repel each other, there are also fixed positive charges at the ionized donor sites that attract the mobile electrons, and the associated fields can cancel each other out)

This is again not quite right.

There are (relatively) many electrons in the n-region. These not only got excited from the donor sites into the conduction band, but thermodynamics says they'll take a certain distribution of energies above the conduction band edge. Because of this, a small fraction of them will have enough energy to overcome the potential barrier of the junction, should they randomly happen to move in that direction.

Similarly, on the p-side there are relatively many holes, and a small fraction of these have sufficient energy to overcome the junction barrier should they randomly happen to move in that direction.

The small fraction of the holes from the p-side that happen to cross the barrier over to the n-side form an excess population relative to the equilibrium hole population on the n-side. So, through random motion they have net motion away from the junction.

At the same time, as they randomly move around on the n-side, they have a probability to recombine with the vastly more numerous electrons present on the n-side. So we see (if the n-side is big enough) an exponential drop in this excess hole population as we move away from the junction. (the same way there's an excess electron population on the p-side, dropping exponentially as we move further into the p-side)

1
How holes conduct current?
0
Depletion region (PN Junction) question
0
Why can't a reverse biased diode conduct by majority carrier injection?
4
Do the "holes" in a P-N junction really diffuse?
1
How do electrons in n type (conduction band) fall into holes in p type (valence band with lower energy) in a pn junction?
1
P-N Junction Diode (Semiconductor)
0
Why does negative charge and positive charge accumulate so close to the junction instead of diffusing throughout p and n type semiconductor of diodes?