I saw a diagram of the photosensitivity (Current per Power) of a photodiode. 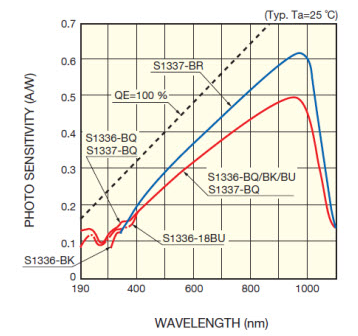 So there is this diagonal stating the 100% quantum efficiency. I wondered why the sensitivity for bluer light lower than that of redder light.

Is it because a blue photon has a higher energy? Thus fewer blue photons are needed to achieve the same power as with red photons? The photocurrent is proportional to the number of converted photons. So a 1 watt beam in red has more photons, which generate more photo-electrons, thus more current per watt.

Is this reasoning correct and explains the curve in the diagram?

I don't know the physics of this device, but let's think it through.

Did you notice the units of the vertical scale? Its per Watt, not per photon, but the interaction occurs on a per-photon basis.

For a given incidence power, the number of photons is inversely proportional to the wavelength, which leads to a conjecture: what if each photon over threshold releases the same number of electrons. Then we expect $$ \text{current} \propto \frac{\text{# of photons}}{\text{second}} = \frac{\text{power}}{\text{energy per photon}} \quad.$$

Rearranging that and noting that photon energy goes by the inverse wavelength we get $$ \frac{\text{current}}{\text{power}} \propto \text{wavelength} \quad, $$ which is in reasonably good agreement with the central slope of the graphs.

The other features are probably related to multiple emission (at the left end of the graph) and threshold (on the right).

So, to address the question in the title the sensitivity is not a strong function of wavelength if understood on a per-photon basis.

Not the answer you're looking for? Browse other questions tagged electromagnetism electricity radiometry or ask your own question.

3
Does recharging a battery at a lower temperature lower its internal resistance?
2
Higher To Lower Electric Potential
5
How electricity, and generating electricity works on the atomic level?
0
Photoelectric effect: current vs wavelength
0
Comparison between current and voltage sensitivity
3
Why does a higher wattage incandescent light bulb have a lower resistance value than a lower wattage incandescent light bulb?
0
The sensitivity of the galvanometer