Is it possible to have a rotating disk in an incline with no rolling down and find the speed at a given point on the object? [closed]

Ask Question
Asked 3 months ago
Active 3 months ago
Viewed 34 times
1
$\begingroup$
Closed. This question is off-topic. It is not currently accepting answers.

I found this problem in my book and which by the look of it doesn't makes sense from the mechanical point of view.

The problem is as follows:

The figure from below shows a circular plate rolling over an incline without slipping. The speed on point $B$ is $30\frac{m}{s}$, find the speed given in (meters per second) of $A$ and that of $O$ in the instant shown. 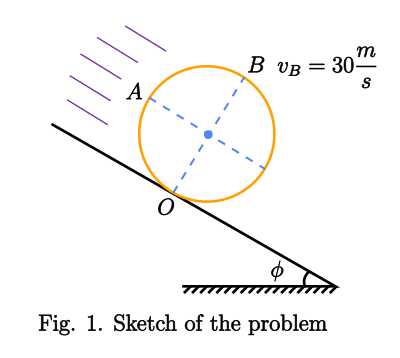 The alternatives given are:

If I'm not mistaken the speed on point $O$ must be zero as the components of velocity in the point of contact cancel because the translation and rotation cancel each other. But what makes me confused is that, if the plate is rotating without slippage, wouldn't mean that there is no translation and only rotation? And because of such wouldn't it mean that there will be velocity in point O?

Can someone help me here? Supposedly the answer is the first option which does seem to check with what I was guessing for the point of contact. I'd appreciate that an answer could teach me on the physical aspect that it is happening here and be detailed the most as possible, because I'd like to know what's going on.

I assume here that speed means velocity in the direction of the slope. Your assumption about point $O$ is correct. It must be stationary. To think about the other points, try changing the frame of reference.

Imagine the plate is rotating but stationary (or better still, is a stationary wheel on a fixed axle) and is sitting on top of a moving belt.

The belt is travelling at speed $-v$. This must also be the speed of the bottom of the plate as it is not slipping on the belt. The top of the plate ($B$) must be travelling in the opposite direction at the same speed ($v$) as it is symmetrical. Clearly, point $A$ isn't moving at all in the horizontal direction so its speed is zero.

To answer your question, just adjust your reference frame again by adding $v$ to everything.

Not the answer you're looking for? Browse other questions tagged homework-and-exercises classical-mechanics rotational-kinematics or ask your own question.

2
Deriving the equation for the speed of a block down an incline using work - keep getting the wrong constant
2
Sign of torque when rolling an object down an incline
2
Given an equation of an elliptical orbit, is it possible to find satellite´s speed at a certain point?
4
Deflating wheel rolling without slipping
3
Why do the expressions for an object rolling down an incline not depend on the coefficient of static friction?
0
How can I find the rotational inertia of two joined bars with respect of an axis?