Slingshot around a black hole, dipping into event horizon

Suppose we have an object swinging by a black hole. My understanding is that if it remains outside the black hole, it just swings by and doesn't lose any energy (except maybe gravitational waves?). But if it enters the event horizon, it's gone forever. i.e. the blue trajectory in the picture is possible, but the red one isn't. 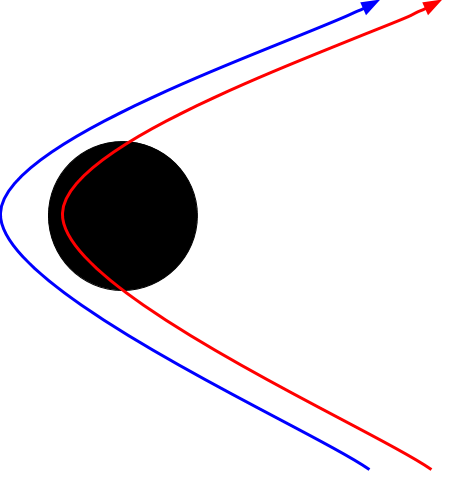 Thank you to the respondents. Summary (if I've understood correctly - please correct me if not) is:

In a plain old Newtonian context, there are some things in your question that show some incorrect understanding. Kinetic energy isn't conserved, it's total energy that's conserved. It's not true in general, for motion under the influence of a central force, that conservation of energy forbids a collision with the origin. That depends on how the force varies with distance.

Re general relativity, Wikipedia has a nice article on the orbits of test particles in the Schwarzschild spacetime: https://en.wikipedia.org/wiki/Schwarzschild_geodesics . Another good reference is the book Exploring Black Holes by Taylor and Wheeler.

A test particle in the Schwarzschild spacetime has a conserved energy and a conserved angular momentum. These are conserved both inside and outside the horizon. The energy doesn't have a nice interpretation in terms of a split into kinetic and potential terms.

As a particle infalls past the event horizon and approaches the singularity, its energy and angular momentum remain constant. The singularity represents the end of time in this spacetime, so the particle's energy and angular momentum are literally conserved until the end of time. If these remarks about the end of time don't make sense to you, I would suggest you learn how to interpret Penrose diagrams. I have a simple nonmathematical presentation of Penrose diagrams in my book Relativity for Poets, which is free online: http://www.lightandmatter.com/poets/

As long as the object is outside of the event horizon it will not lose kinetic energy (disregarding any gravitational wave phenomena). You can think of this case as an elastic scattering of two bodies.

Not the answer you're looking for? Browse other questions tagged general-relativity black-holes energy-conservation collision event-horizon or ask your own question.

11
Schwarzschild coordinates beyond the event horizon
10
How do frames of reference work in general relativity, and are they described by coordinate systems?
0
Is it possible for a star orbit at any distance from the black hole and what would happen if it partially passed through the event horizon?