Ask Question
Asked 3 months ago
Active 1 month ago
Viewed 249 times
4
$\begingroup$
Closed. This question is opinion-based. It is not currently accepting answers.

I really want another answer to this question than just my own.

As many people probably know the late Prof Laithwaite in the UK (a brilliant electrical engineer) made the error of wandering outside his field of expertise and claiming Newton's Laws needed amending to deal with rotating objects.

He presents a whole series of experiments on gyros, that as far as I can see, perfectly follow Newton's Laws. There is just one video that totally baffles me. I can only think there is either intentional or unintentional deception by Alex Jones, who is demonstrating the device; see the video Patent DE2341245A1 — Vortrieb durch Präzession.

I believe what is going on is that Jones (either intentionally or otherwise) is applying a horizontal force during the initial motion. The gyro will, of course, be applying a torque, but it will be a pure torque with no net force.

Question: I know this sounds dumb, but have I got that right, or are there any alternative explanations? Is it the opinion of others seeing this video that the explanation is simply deception (as I believe it is)?

I admit to feeling a little embarrassed asking this, but assuming deception, it is fairly well disguised.

To make things more simple, you can take into account a similar system - a ball wobbling on swings, which are established onto platform with wheels. Schematics : 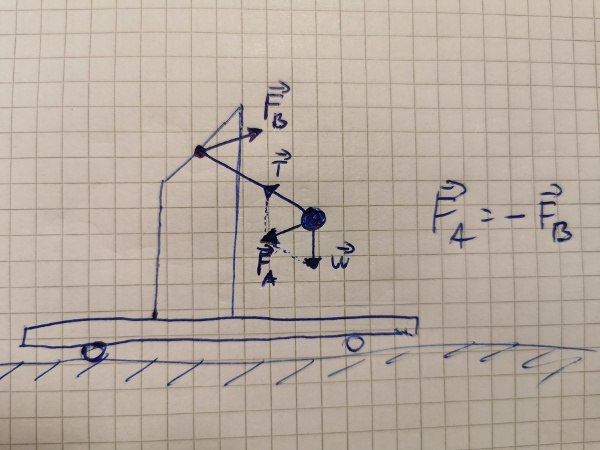 Tension + weight generates net force $F_A$ on ball, which according to third Newton law exerts same magnitude but opposite direction force $F_B$ to it's support : $$ \vec{F}_A = -\vec{F}_B $$ Because support is coupled with platform which has wheels on it - it starts to move in $F_B$ direction. It's simple as that. Of course gyroscope+arm system is more complex that this setup, but I am sure that basic principle is the same.

Conclusion - No any magic here and all Newton laws works as expected.

share|cite|improve this answer
answered Jan 31 at 22:13

Just for completenes as @knzhou 's comments answer the question.

1st: In an inertial frame of reference, an object either remains at rest or continues to move at a constant velocity, unless acted upon by a force.

An inertial frame of reference is one in which the motion of a particle not subject to forces is in a straight line at constant speed.

Hence, with respect to an inertial frame, an object or body accelerates only when a physical force is applied, and (following Newton's first law of motion), in the absence of a net force, a body at rest will remain at rest and a body in motion will continue to move uniformly—that is, in a straight line and at constant speed. Newtonian inertial frames transform among each other according to the Galilean group of symmetries.

Note that we are talking about laws. Laws are the axioms, distilled from data and observations, that physics theories use to pick up the mathematical model that is appropriate for the physical system under study.

The system described as a whole is not inertial, as motors have accelerating forces. In the initial inertial frame of the table the motion is defying no laws, because a force is exerted from the rotation of the motor.

All motors produce force , because of rotation, centripetal and centrifugal, whether electric or not, and depending on the set up can induce directional motion because once a rotation starts there is no longer an inertial system for Newton's laws to hold, and in the original inertial system a force appears, which according to the first law, can change the state of the body . As khnzu states in his comemnt, the rotational force creates a frictional force in the original inertial frame of the table.

Think of an electrical motor drone, it flies in the direction chosen by the design, energy supplied by the batteries electromotive force rotating the motor, the displacement of air (first law) producing the motion forward. ( same as with cars and friction of the wheels on the road).

So as knzhou says in the comments to the question, if there were no friction to the wheels of the device, the system would not move.

I don't think that the demonstrator is giving the contraption a shove.

Suggesting that the demonstrator gives a shove is not necessary.

I'm spelling out all of this because I need names. From here on I will refer to 'the movable plate', and 'the movable arm'.

Let me first discuss what the demonstrator would have to set up if the gyro wheel is not spinning.
Then he can simply lift the movable arm, and when he releases the movable arm the contraption as a whole will start to move, simply because the weight at the end of the movable arm is swinging down.

Now to the actual demonstration, with a spinning gyro wheel.

In the demonstration you see that for each run the system is freshly prepared.
The movable plate is lifted sideways, then the contraption is released.

When the gyro wheel is spinning you add the intermediate step of lifting the movable plate sideways, and then the gyroscopic precession lifts the movable arm.

Not the answer you're looking for? Browse other questions tagged newtonian-mechanics rotational-dynamics rigid-body-dynamics gyroscopes or ask your own question.