Why does the image lose its clarity when it is formed in front of the retina?

This idea is not intuitive to me. How can the formation of image in front of or behind the retina be not clear? Why does the converging point of the rays of light produces a sharp image? Is it possibly because the brightness of light reduces when it moves further in a particular medium, maybe because of scattering ?

Suppose a person looks at a point light source located far away. Light rays from that source will come to the cornea of the person's eye almost parallel. Ideally, the image forming system of an eye (cornea, lens and vitreous body) should be arranged in such a way that the point source is imaged as a point on the retina.

If there is an non-point object instead of point source, it can be thought of as a collection of point sources, each of which should also be imaged as a point, thus forming the image of the object.

But if the person we are discussing has myopia, the image forming system of a myopic eye will image a point source in front of retina, like in the figure below (taken from here): 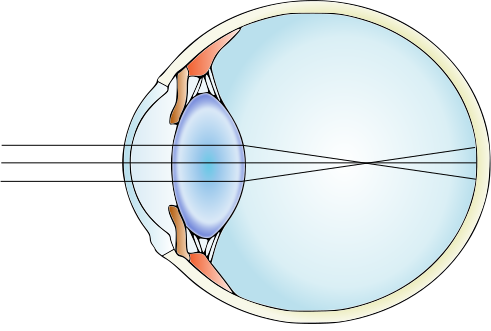 Notice that light propagation doesn't stop in the focal point. Light rays, initially converging to focal point, continue to diverge from it. Then the image of a point source becomes a disk on the retina. If we had a pair of point light sources close enough to each other, these disks would overlap, so that at some small enough separation between them the myopic person would be unable to resolve them, instead seeing a single blurred spot.

This point-to-disk dilation then happens to all the points of extended objects, and this is exactly what the blurring is.

Similarly with hyperopia, the rays haven't yet converged to the focal point, but are already intercepted by retina, thus making a point light source appear as a disk.

4
Why do we see a blurred image when the screen is not placed at the position where the image is formed by a convex lens?

2
Effects of high frequency lighting on human vision?
0
Seeing the image as explained by Geometrical optics?
2
Basic geometric optics question - how come we don't have to have exact focus to capture objects clearly?
2
Convex Lenses and Inverted Images
1
Ray diagram of focussing on a compound microscope
1
What will be the effect on the image formed by a mirascope if spherical mirrors are used instead of parabolic mirrors?
4
Why do we see a blurred image when the screen is not placed at the position where the image is formed by a convex lens?
0
Image reconstruction / generation in the human eye
0
Can we see the image of inside of our eye, in front of the eye?