Quasi-classical model of an atom

This question does not have a close relationship to this or this Stack Exchange question. It's not about the Bohr atom model nor the Rutherford atom model, but is fairly closely related to this3 SE question.

In other words, the current is represented as if it were a fluid with density $\rho$ and position-dependent velocity. For charge conservation,

The equations now describe the general static solution to Maxwell's equations, assuming that current is due to a charge density moving like a fluid.

Given the above assumptions, it is clear that $\vec v$ is a function of position, and I think it means that each element of $\rho$ is accelerated according to

$$\frac {d}{d t} \vec v = (\vec v \cdot \nabla) \vec v,$$ (corrected, thanks to @g.Smith) even though the charge and current densities per se are not time dependent. The flow of each charge density element taken in isolation would constitute a time-dependent current, but taken all together there would be no time dependence and therefore no radiation.

The question: I think the statements above are straightforward and correct. Now comes a bit of a leap:

This would seem to describe an almost-classical model of an atom, as long as total charge and angular momentum are quantized, and as long as no element of the charged fluid interacts with the rest of the charged fluid. (Classically this would be absurd, but we happily accept the quantum mechanical fact that the electron wave function does not interact with itself.) Surely this model has been explored and rejected for multiple good reasons, but I haven't been able to find any papers mentioning it.

Here is a sketch of a simple case. The purple sphere in the center is the massive charge: 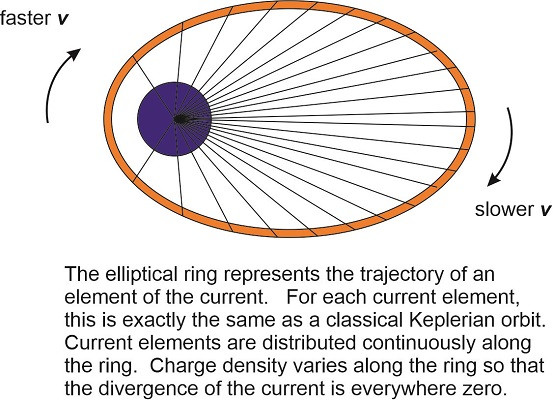 Based on references like Mfrisch, it seems that the system I've proposed has been considered and abandoned more because of its complexity than anything else. However, the problem is greatly simplified under the assumption that the charged fluid does not interact with itself. With a classical charged fluid that wouldn't make much sense; but since this is only a quasi-classical model it should be okay.

It may be possible to use a version of the Boltzmann equation to derive stationary charge/current distributions around a massive charged particle.

I am answering my own question in the negative, after doing some fairly extensive research. It turns out that there are serious problems with the very concept of a "charged fluid".

In a 2004 paper entitled "Laws and Conditions", Mathias Frisch pointed out in effect that if two infinitesimally small positively charged fluid elements were placed at different positions on a line intersecting the center of a positively charged massive particle, and both were released at the same time, both elements would be repelled from the center but the element initially closer to the center would eventually overtake and pass the the other element. The fluid would essentially pass through itself, and would have two velocities at the same point in violation of the assumption that (as a liquid) it can be characterized as having density $\rho (x,t)$ and velocity $\vec v (x,t)$.

So, even though under Maxwell's equations a stationary (time-independent) charge and current distribution will not radiate, an electron cannot be treated as a charged fluid in a self-consistent way when interacting with a Coulomb field. The idea of "fluid" would need to be radically modified for a charged fluid model to be plausible.

Not the answer you're looking for? Browse other questions tagged quantum-mechanics atomic-physics classical-electrodynamics maxwell-equations semiclassical or ask your own question.

6
Bohr's model of an atom doesn't seem to have overcome the drawback of Rutherford's model
7
How does a charge distribution evolve with time? (in classical electrodynamics)
1
classical understanding of an atom

13
Does existence of magnetic monopole break covariant form of Maxwell’s equations for potentials?
6
Why is there no (time derivative of charge density) in the $B$ field in Jefimenko's equations?
4
Classical Viewpoint on Electromagnetism
15
Trouble understanding the Bohr model of the atom
1
Can a charge moving in an open trajectory qualify as current?
0
What happens to the charge density under parity?
0
Separating static and time-dependent components of E and B
1
After the plum-pudding model failed, why did physicists conclude that electrons were in orbit