How do magnets attract (QED)? [duplicate]

I'm starting my graduation in physics and it may sound like a dumb question, but it's haunting my mind for days. It is known that the scattering of two electrons can be represented by the following Feynman diagram: 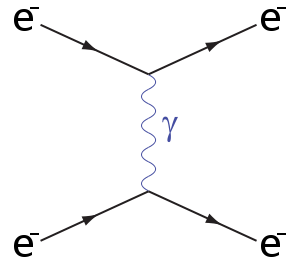 But I wonder: How does the opposite happen? I mean, how does a positive particle attracts a negative one via photon mediation?

It is very important that you understand the difference between a static EM field and EM radiation.

You are talking about static EM fields (two electrons repelling), and photon mediation, but in reality these are virtual photons, just a mathematical model to describe the effects of the static field.

In reality, we do not know how the static EM field around the electron and the proton (or two electrons) work, we just know their effects from experiments, and we describe this effect with virtual photons, a mathematical model.

We do know that electrons and protons (quarks) have an intrinsic property called EM charge, and from experiments we do know that like charges repel and opposite charges attract. But it would not be a real picture trying to describe this with small classical billiard balls flying inbetween, because the underlying world is QM.

Not the answer you're looking for? Browse other questions tagged electromagnetism quantum-electrodynamics feynman-diagrams or ask your own question.

33
How are forces “mediated”?
6
Photon as the carrier of the electromagnetic force
2
What does this feynman diagram represent?
2
Feynman diagram, which virtual particle?
6
Why does an electron react differently to a virtual photon in the interaction between two electrons and between an electron and a positron?
1
Could this feynmann diagram happen on its own? $e^- \to W^- + \nu_e$