Why can we say there is no tangential acceleration in this specific problem?

I'm looking at a problem involving a simplified rollercoaster with only 3 cars (connected with weightless rods) for which the friction and distance from the carts to the rails can be ignored. The part I was thinking about is the following: at a certain moment cart 2 is situated on top of an arc as I have drawn here. 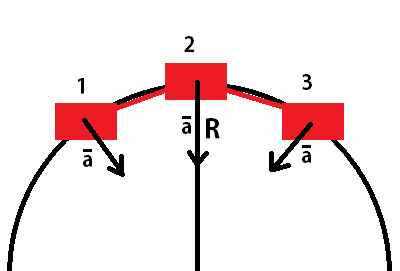 At a certain point in the set of questions, we seem to rely on the fact that all carts share the same acceleration $a = \frac{{v_2}^2}{R}$. Now I understand that they all share the same normal acceleration since they are performing a circular motion, but what is stopping them from having a tangential acceleration? In other words: why do we know $a_t = 0$ for each cart?

At the exact instance above, we can indeed prove that the tangential acceleration on each of the 3 individual carts is zero:

Cart 2 obviously experiences no tangential acceleration as gravity pushes it in the same direction as the normal force due to the track, which is perpendicular to the cart's direction of motion.

The force due to gravity on cart 3 does have a tangential component though, as gravity acts straight down with a component along the direction of the track. This causes the third card to "want" to speed up due to gravity, as would be expected.

However, since the same exact force is also exerted by gravity on cart 1 (but is in the opposite direction tangentially to that on cart 3), the force of gravity causing cart 1 to "want" to slow down will exactly cancel, and thus we see that the net tangential acceleration across the entire train at this exact instant is zero. Since each cart is connected, this proves that the net tangential acceleration on each individual cart is also zero, and the normal acceleration on each cart is the same and as suggested above, $a=\frac{{v}^2}{r}$.

Another perhaps simpler way to think of this is that the instant above describes when the train, as a whole, passes the top of the loop. Thinking of the train as a smaller mass (a ball or point mass, whichever) it then becomes clear that at the top of the loop is the moment when the train moves from slowing down to speeding up, which is to say in this case that the tangential acceleration is zero.

Not the answer you're looking for? Browse other questions tagged homework-and-exercises acceleration or ask your own question.