What is QFT at finite temperature?

What is the relation between these two interpretations (if they are both correct)?

Now, if we are entirely interested in finite-temperature statics (which is the case when we use the classical canonical partition function you discussed in your question), we won't need to Wick-rotate back to real times/frequencies, so we might as well just completely integrate out our finite-frequency fields. (The mass gap of the field $\phi(n,x)$ is proportional to $1/\beta$, so this becomes more natural at higher temperatures.) Placing Eq.(\ref{eq1}) into the partition function, we can write $$ \mathcal{Z} = \int \mathcal{D} \Phi(x) \mathcal{D} \phi(n,x) \, e^{-\mathcal{S}[\Phi(x),\phi(n,x)]} = \int \mathcal{D} \Phi(x) \, e^{- \beta_{\mathrm{cl}} H_{\mathrm{cl}}[\Phi(x)]}, $$ where we are now defining a "classical Hamiltonian" $$ \beta_{\mathrm{cl}} H_{\mathrm{cl}}[\Phi(x)] \equiv - \log \int \mathcal{D} \phi(n,x) \, e^{-\mathcal{S}[\Phi(x),\phi(n,x)]}. $$ Since the field $\Phi$ is time-independent, this will be a functional in $d$-dimensional space. Thus, as you can see, in some sense you can obtain a finite-temperature $d$-dimensional classical statistical field theory from a finite-temperature quantum field theory.

Of course, this procedure will result in a theory with more microscopic details/information than if you had started with a classical theory, since the resulting effective theory will have dependence on $\hbar$, and in general the couplings will all have a complicated $\beta$-dependence rather than the simple temperature-dependence of the classical canonical ensemble. But if one takes the effective field theory approach to both the quantum and classical field theories, then one should interpret both the initial and final theories in terms of universal theories near phase transitions (i.e. mass gaps much smaller than cutoffs). As a definite example, say our original quantum Hamiltonian is the transverse-field Ising model: $$ H = - \sum_{\langle i j \rangle} \sigma^z_i \sigma^z_j - g \sum_{i} \sigma^x_i, $$ where the first sum is over nearest-neighbors on a hypercubic lattice. Then for $d \geq 2$ the phase diagram of the theory looks like the following picture: 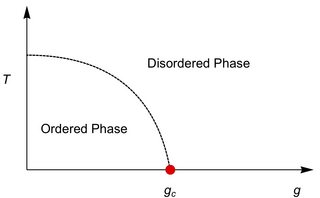 That is, there is a quantum phase transition directly at $T=0$ and $g = g_c$, and this is described by critical $\phi^4$ quantum field theory in $(d+1)$ spacetime dimensions. However, for $T>0$, there is a classical phase transition at some point $(T_c,g^{\ast}(T_c))$, which is described by a the $\phi^4$ classical statistical field theory in $d$ space dimensions. A continuum field-theoretic description of this system is only valid near the phase transitions. But for example, near the quantum phase transition one can consider small deviations $T>0$ and $g < g_c$, and in principle, there is a precise crossover from the quantum critical to classical critical behavior dictated by the relative strength of quantum and thermal fluctuations, and the prescription for relating these transitions is given by the above procedure. In fact, it is not hard to argue that the effective field theory after integrating out the finite-frequency modes will also be a $\phi^4$ theory. For further discussions on this case (and some computations using $\epsilon$ expansions), see this paper. (Chapter 14 of Sachdev's textbook Quantum Phase Transitions is essentially a shorter version of that paper.)

Not the answer you're looking for? Browse other questions tagged quantum-field-theory statistical-mechanics temperature wick-rotation or ask your own question.

9
Imaginary time in quantum and thermodynamics
21
Duality between Euclidean time and finite temperature, QFT and quantum gravity, and AdS/CFT
8
Temperature in the Hamiltonian limit
3
Sign of the coupling constant for a $\phi^4$ interaction
4
Why is the path integral action not real in most condensed matter QFT?
4
Why are gapless modes the same in both quantum and statistical field theory?
1
Differentiating Landau free energy functional from the energy levels of a system
4
Wick Rotation & Scalar Field Value & Mapping