How does voltage drop in series connection happen?

The fact that the voltage is the same for two elements connected in parallel seems very clear and intuitive.

But when switching to the other related idea, of voltage drop in series connection, I do not quite get it.

It’s clear to me that the voltage will be lower the closer we get to the low potential end of the voltage source.

But it’s not clear that the voltage will drop depending on the resistance (and not on the distance to the source). 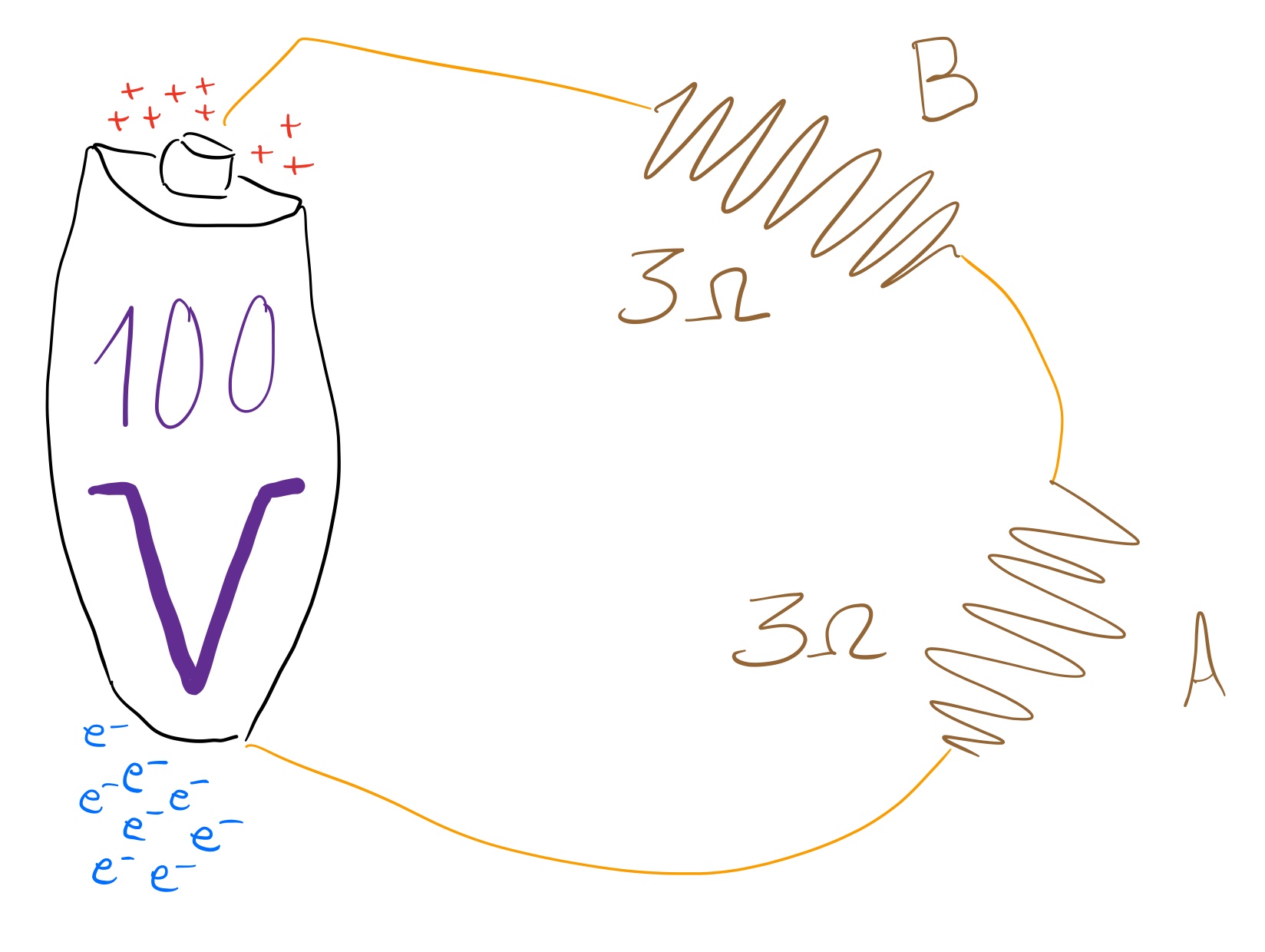 The fact is that each resistance will cause a 50 V drop, but I do not understand how this happens. I see the maths coming from the Ohm’s law, but I do not get the idea.

Also, when everything starts running, does the first resistance on the path (resistor A) get all 100 V until the current reaches the second resistance? Or will it instantaneously get its 50 V without the electrons even knowing/feeling that there is a second resistance?

Yes, resistors make the voltage drop by "locally" slowing down electrons, so that they have to "waste" some energy to overcome the obstacle - that causes the voltage drop. You can think of them as "stairs" in the voltage.

The reason is that we idealize the "connections" as being with zero resistance, i.e. two points in the circuit without a resistance in between will have the same voltage. In addition, we assume there is a steady state so that the "initial" flowing of electrons inside the circuit is neglected and we focus on when the system is flowing without changing over time. It is an idealization.

If you think about it, the fact that the cables have no resistance has to be false, because otherwise short-cutting a circuit (i.e. connecting the two poles of a battery of voltage $V$ without any resistance in between) would lead to a current $I=V/R$ where the resistance $R=0$ so that would result in an infinite current $I=\infty$.

In reality, cables have some resistance $r$. We can model that as a fragment of length $dx$ of a cable of having a resistance $$r=\rho dx$$ that is, $\rho$ is a resistance per unit length. We assume it to be constant.

In this case, if you measure the voltage between two points of the circuit at a distance $L$ without any resistance between it you would measure a distance-dependent voltage drop $$\Delta V = -\rho L I$$ where $I$ is the testing current.

This drop is however in general very small compared to the voltage $V$ of the battery and is usually neglected. It is however sometimes necessary to take it into account!

Notice that you can always approximate this by an ideal circuit with a resistance $r=\rho L$ in series with the "normal" resistance $R$ - that is of course unless you are actually interested in the spatial value of the voltage $V(\ell)$.

With the same reasoning, you can also, instead of modelling your resistance $R$ as a point-like object, assume it has an extension $L_0$ with a resistance per unit length $r_0=R/L_0$, so that now the voltage depends on where you measure along the resistance with $\Delta V= -r_0 x I$ with $x$ the position along the resistance.

You can also model cables as 3D cylinders with a resistance per unit volume and so on - to learn more: resistivity

Now we model the circuit at the initial times. To do this properly we would need a capacitor and differential equation, but I guess that would be too advanced now. I will try a different approach.

Assume we have a cable with total resistance $R$ and we split it into $N$ pieces of resistance $r=R/N$. We have a battery and the cables connects the two parts of the battery. At the initial time, everything is at a voltage $V=0$ except the point where the battery is, which has voltage $V$. At the beginning, the electrons see a small piece of circuit with resistance $r$, the voltage difference is $V$ and emit a current $i_1=V/r$. Now they see another resistor and so emit a current $i_2=V/(2r)$. (This is because they see a resistor $r$ at a voltage $V$ and then follow Ohm's law).

And so on, such that when the electrons have crossed $n$ resistors the voltage drop across the first one is $$V_1(n)=V/n$$

So, at time $t=0$ where is a spike in current across the first resistor, which then decreases to a final value as the electrons "explore" the presence of new resistors and fine their average final current. The same holds for the voltage.

In a parallel connection the voltage drop is the same for each resistor--so they are obviously the same and equal to the applied voltage.

The establishment of the voltages is instantaneous in an ideal circuit without any stray capacitance and ignoring other higher order effects like the speed of light.

The potential difference V between two points is defined as the work per unit charge required to move the charge between the two points.

Voltage is defined as the integral of electric field over a path. The voltage between points $a$ and $b$ is given by

where $d\vec\ell$ is an infinitesimal element of a path (any path you like in a true electrostatics problem) between $b$ and $a$.

Remember from calculus that you can break up an integral, defining some intermediate point $c$ along your path from $b$ to $a$,

You can think of the two parts of the integral as defining two voltages, and the voltages have to add up

Now if $a$, $b$, and $c$ are three points in a circuit, with a circuit element between $a$ and $c$ and another one between $c$ and $b$, you have found that the individual voltages across those two elements have to add up to the total voltage across the series combination of elements.

You are correct that the location of the charges is ultimately what determines voltage (in DC circuits), but the presence of the resistors dramatically influences the location and distribution of the surface charges in and on the circuit. Here is a good treatment of this topic that can give you a good method for building intuition on this topic.

Or will it instantaneously get its 50 V without the electrons even knowing/feeling that there is a second resistance?

Circuit theory only applies for time scales much longer than $L/c$ where $L$ is the physical length of the circuit. At applicable time scales it gets the 50 V, and at shorter time scales you have to use the full electromagnetic theory. At those time scales things are very complicated and depend sharply on the geometry. During this time the surface charge distribution found above is being arranged.

Not the answer you're looking for? Browse other questions tagged electric-circuits potential electrical-resistance voltage batteries or ask your own question.

0
Intuitive explanation for why potential difference is distributed in proportion to resistances in a series circuit?