Yes, at approximately the speed of sound.

Is the weight of people swimming in the pool also transferred to the ground?

How to prove it?

The swimming one can be quantitatively proven with a kitchen scale. Weigh an object that will float. Fill a bowl partway with water. Weigh it without and then with the object.

The airplane one can be qualitatively seen in pictures of aircraft flying low over water. 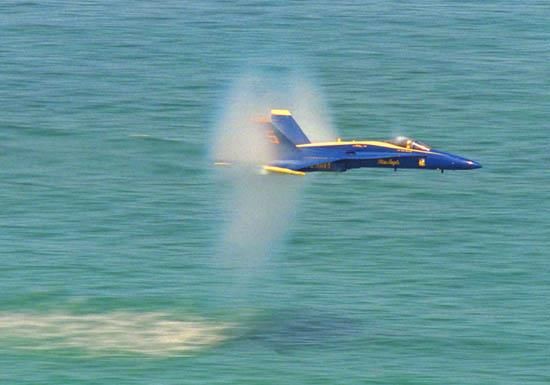 If the planes flew higher, to avoid air friction and at much greater speeds, they would orbit, and no weight would be transferred to the ground.

The weight of floating objects on water is obviously transferred. Just put lots of ice on a water jar to verify.

Yes the supporting force is ultimately transferred to the ground, for a theoretical "proof" (=calculation) one would likely employ the concept of control volume in fluid dynamics, and calculate the momentum balance and pressure balance around the surface of the control volume.

In simple terms, the pressure distribution around the airplane (mainly the wings) generates the lift, while at the same time pushing air downwards, to satisfy the momentum balance. This in itself is enough to provide lift.

The downwards directed airstream will gently flow towards the earths surface and excert a pressure increase there, because there it will get redirected, hence applying the same lift force on the ground.

For an airplane flying at high altitude, this airstream will be dragging surrounding air with it due to friction inside the airspace, and hence widen up. Since the momentum is conserved, the larger the moving mass, the slower the velocity will be. By the time this air flow gets redirected on the ground, it's a large mass at low velocity, so the pressure increase for redirection will be very low, and wide spread out.

For a low-flying airplane, the airstream directed downwards is significantly more concentrated, leading to a higher pressure increase on the ground. (key word "ground effect", and the things visibly in the picture of the F18 seen above.)

Buoyancy of a swimmer in a pool:

This is somewhat simpler - no need to check momentum balances. The ground will have to support everything that's inside the pool, otherwise the pool would accelerate towards earth center. As analogy, you could put a pot with water ("model of a pool") on a scale, and then add an apple ("model of a swimmer"), and check what the scale shows in the two cases.

This seems like an application of Newton's Third Law: For each action there is an equal and opposite reaction.

The airplane flies because the air beneath it exerts an upward force on the wings. There's also a downward force from the air above, but the wing shape takes advantage of Bernouli's principle so that the upward force will be greater. The net force is upward, and must be equal to the aircraft's weight when cruising or rising at a constant upward velocity (it will be greater when it's accelerating upward).

Therefore, the wings are exerting a net downward force on the air below it of an equal magnitude. And each volume of air similarly exerts force on the volume below it, going all the way down to the ground.

In effect, the column of air below the plane acts like enormous stilts connecting the plane to the ground.

Logically: the aircraft is supported by reactions with the surrounding air; the air is supported by the ground, so yes, the weight of a flying aircraft is transferred to the ground. Although winged aircraft fly due to aerodynamics, interactions between air molecules ultimately represent the weight of the aircraft in their interactions with the ground. The closer an aircraft is to the ground, the more localized the effect (there is a noticable downwash as an aircraft passes over); the higher its altitude, the more it diffuses out. This is a twist on the "birds in a truck" riddle.

Does the weight of the water in a pool transfer to the ground? Obviously yes.

If you added an amount of water to a pool equal to the weight of a swimmer, would that added weight transfer to the ground? Obviously yes.

If you add a swimmer to a pool, why would you treat the addition of their weight differently? You don't.

So, yes, the weight of a swimmer transfers to the ground. However, as water is a fluid, the weight isn't applied directly under the swimmer; it is evenly distributed over the entire bottom surface.

Let's do a thought experiment: what if we increase the number of planes in the air until they blot out the sky1? If pressure transmitted to the ground is not holding them up, then what is? Does the air itself have some kind of magical inertia that allows it to suspend planes without themselves transmitting the force? Does the density of this magical air matter? Could we thin out the atmosphere and still maintain this "airplane shell"?

Let's do just that. Let's put all the planes on the ground, and cover the surface with runway, so the planes are rolling around on their wheels. Do we agree that the ground is holding them up? Now, let's gradually add air until they lift off. Note that as their speed increases and they generate lift, the suspension will hold up less and less of the aircraft weight. Where does this lift come from, and what is it pushing against? The wheels are pushing against the ground, so if the air isn't also pushing against the ground, you need to invoke some magic to tell us what the air is doing differently than the wheels to counteract gravity.

Now, it turns out that the lift near the surface does something special, called ground effect. This increase in lift is so pronounced that entire vehicles have been built to take advantage of it. One of the largest such "planes" was the Russian-built ekranoplan. @Dale's dramatic picture of an F-18 skimming the ocean looks awesome, but doesn't directly imply ground effect, because we know these jets can fly at tens of thousands of feet. Whereas, the ekranoplan couldn't even get 100' into the air, because it is completely dependent on ground effect, which is the increased lift from air pushing against a nearby surface (like the ground, usually).

In the same way, if our "airplane shell" were "floating" on our atmosphere, but were not air-tight, then some of the lift would actually go towards forcing the air between the cracks, and accelerating it away from earth. So even though most of the force must eventually get to the ground to support the weight of the airplanes, the slippery nature of gases ensures that we cannot direct all of the lift exactly downwards.

Note: all of the weight of the airplanes must be ultimately transferred to the ground, or they will not be able to maintain level flight. However, the "weight" of the airplane also causes forces to be transmitted in all other directions as well, including upwards.

1 Let's ignore the fact that there isn't a feasible flight path for all those planes, assuming straight and level flight, or that they don't perfectly tile the surface of a sphere, or that aerodynamic effects would prevent them from flying so close together, etc. Just pretend they are spherical cows.

2 If they were going far, you would notice them as currents, although, diffusion of dye in the pool should show you that a single molecule could make it all the way across the pool eventually, just from Brownian motion.

Short version: the weight of the atmosphere, the oceans, and everything in them presses on the earth. This includes the plane, whether flying or not.

Not the answer you're looking for? Browse other questions tagged forces pressure fluid-statics free-body-diagram aircraft or ask your own question.

2
Weight in Newtonian mechanics
1
Is the weight of a projectile launched from earth and while still flying in the atmospheric sky transferred to the ground?

1
Is airspeed constant or cyclical when flying model aircraft in windy conditions?
3
How does one exert greater force on the ground by jumping?
0
Lifting a weight and reaction force from ground
20
Why do jet engines sound louder on the ground than inside the aircraft?
1
Change of buoyant force as object moves deeper
1
Is the weight of a projectile launched from earth and while still flying in the atmospheric sky transferred to the ground?