Is the speed of light in all media independent of reference frame?

I tried to frame my question visually. So, let us consider the following image: 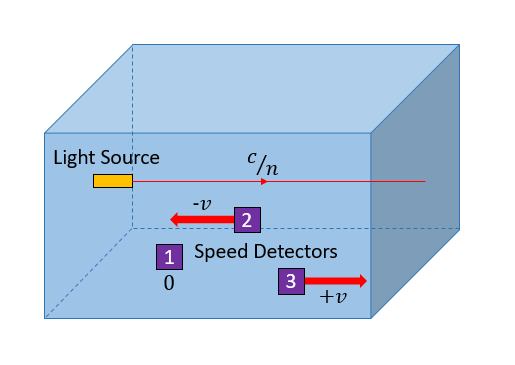 Image Courtesy: My Own Work :)

The above formula gives the speed that will be measured by your detector number 3, if we take it that the detector works in the usual way by measuring distances and times in its own rest frame. The result for detector number 2 will be $$ \frac{c/n + v}{1 + v / n c}. $$

In particular, anything travelling at a velocity other than $c$ has a rest reference frame in which it will be observed to have zero velocity. If Detector 3 in your diagram is travelling at $\frac c n$, then the light wave will appear to be a standing wave.

The speed of light only differs when comparing it in two mediums with a different refraction index. With the added changes we can say that the detector with $v=v+$ will detect the light as going $-v$ slower than $c$ and vice versa.

The other answers give some good results how to arrive at the correct result from the reference frame of the water: We just relativistically add the two speeds to see that our speed of light measured changes with the detector movement.

However, relativity means the same result (up to time dilation, obviously) should come out when we look at it from the detector's reference frame. So what does that look like?

We have our light pulse, starting at some point away from the detector, then moving towards it until it reaches it and is registered (and its speed measured somehow). While doing so, it moves through a refractive medium (the water) that itself moves relative to the reference frame.

Therefore, the water (from the perspective of the detector) undergoes Lorentz contraction, meaning it becomes "shorter" in the direction of movement. For a flow of water, this means it becomes denser: The molecules along the direction of flow appear squashed and tighter together.

While the exact processes of how the interaction of light in matter results in a refractive index are complicated, it suffices for our explanation that it's dependent on density: If there's more matter in a volume to interact with, the light will be slowed down more. Thus, what changes from the perspective of the detector is $n$: Moving water has a different refractive index compared to water at rest.

Not the answer you're looking for? Browse other questions tagged reference-frames speed-of-light refraction or ask your own question.

51
Why and how is the speed of light in vacuum constant, i.e., independent of reference frame?